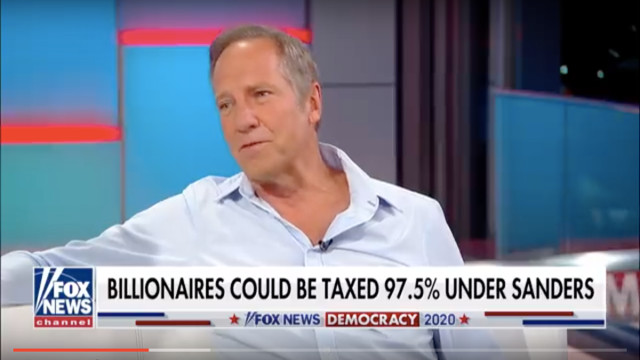 Mike Rowe, America’s favorite champion of the average, blue collar worker, is on a promotional tour for his new book, “The Way I Heard It,” and stopped by “Fox & Friends,” where he gave a summary of the economic agenda currently being pushed by the Democratic candidates running for president.

Here’s what he had to say, via The Daily Wire:

“When you have a half a million Americans sleeping out on the street today…and then you also have three people owning more wealth than the bottom half of American society, that is a moral and economic outrage,” said Sanders. “So if you are asking me, do I think we should demand that the wealthy start paying — the wealthiest top one-tenth of one percent — start paying their fair share of taxes…Yes, that’s exactly what I believe.”

The hosts then played a clip of frontrunner Sen. Elizabeth Warren (D-MA), who is also running on an aggressive tax-the-rich plan. “Taxing income is not going to get you where you want to be the way taxing wealth does,” she said. “We need a wealth tax in order to make investments in the next generation.”

He then offered a memorable summary of his takeaway from Tuesday’s debate. “Look, in the end you’ve got millionaires arguing with millionaires over who hates the millionaires the most,” said Rowe.

Rowe went on to say, “And I guess it’s a conversation we’ll have, but I remember a couple of years ago, I took my meager staff over the Reagan Ranch … One of the stories they tell is the time when Ronald Reagan just finally decided he was done doing movies. He was just done because he was paying 92% of every dollar he made on films. And it was just math. He wasn’t done acting, he just looked at it and did some basic calculus and said, ‘Not for me anymore. It makes no sense to do this.’”

“I live in California. I just read a report that said the exodus this year as a result of a 13.5% state tax and some other tweaks to the system is unlike anything they’ve ever seen before,” Rowe said. “So I know it’s convenient. It’s fun to kind of hate the rich and all, but in the end they’re just people and they’re going to do the math and they’re going to go where the math is better.

Rowe delivered a brilliant response when asked about the plan to give Americans $1000 a month as a means of accounting for lost jobs due to the increase of automation.

“Why not two thousand? Why not three?”

“Once you say, okay, free money, the next question has to be: Why not more?” said the former “Dirty Jobs” host.

Bernie wants the wealthy… er, excuse me, the “wealthiest”, to start paying. Do you know why he made that correction? It’s because Bernie is wealthy. And HE doesn’t want to pay a single cent. The hypocrite.

Any doubt that if the dems were to become president and start their high taxes for rich people, that they would somehow exempt themselves and that those high taxes would soon affect the middle class of taxpayers also. Merely high-taxing the successful business’ would cause higher prices as those high taxes would be passed along to the customers, that’s you.

Are the politicians going to be on medicare for all or will they be exempt?? They don’t pay for their great healthcare plan We Do!! We are all the idiots giving them millions of dollars for their campaigns and they lie right to our faces telling everyone what they are going to do for us and how they are going to make our lives better but don’t forget they are all millionaires themselves!! I don’t know about anyone else but I’ve been working two and three jobs for more that 40 years and I’m just 55 so who are the… Read more »

Warning…if you have the money…leave the country with your assets!