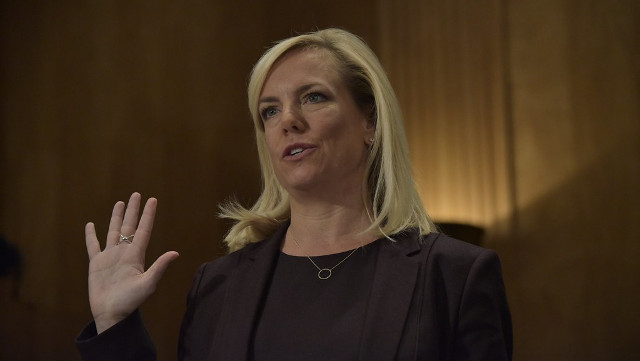 Former secretary for the Department of Homeland Security Kirstjen Nielsen, who stepped down from her post back in April, is coming back to the Trump administration in what is being called a “minor role.”

Officials at the White House announced Tuesday evening that Nielsen would be coming back as a member of the National Infrastructure Advisory Council, which is an entity of the Department of Homeland Security. The board features 30 members from the private sector who help advise the White House on the best actionable steps they can take to reduce physical and cyberthreats to America’s most critical infrastructure.

Nielsen’s appointment comes six months after she stepped down from her post atop the 240,000-member department. She was secretary for 16 months.

Nielsen, a lawyer, left the private sector for the Transportation Security Administration shortly after the Sept. 11, 2001, terror attacks. Her time at the TSA was her only experience in homeland security before serving in 2017 as the assistant to her predecessor, former Department of Homeland Security Secretary John Kelly.

She then went to the White House and worked as then-chief of staff Kelly’s principal deputy. Trump nominated Nielsen in October 2017 to lead the Department of Homeland Security, and she was confirmed in a 62-37 vote.

As of the time of this writing there’s no information available that reveals what Nielsen has been doing with her time since April or where she might have been employed during the last few months.

Nielsen’s departure from the Department of Homeland Security came at a time when the president was growing more frustrated with spikes in the number of migrant families traveling to the United States-Mexico border.

Trump proposed closing down the border at the time to help deal with the increasing influx of illegals. An investigation carried out by the Washington Examiner revealed that closing down the border would’ve interrupted $300 billion worth of annual trade processed by Customs and Border Protection at ports of entry along the southern border.