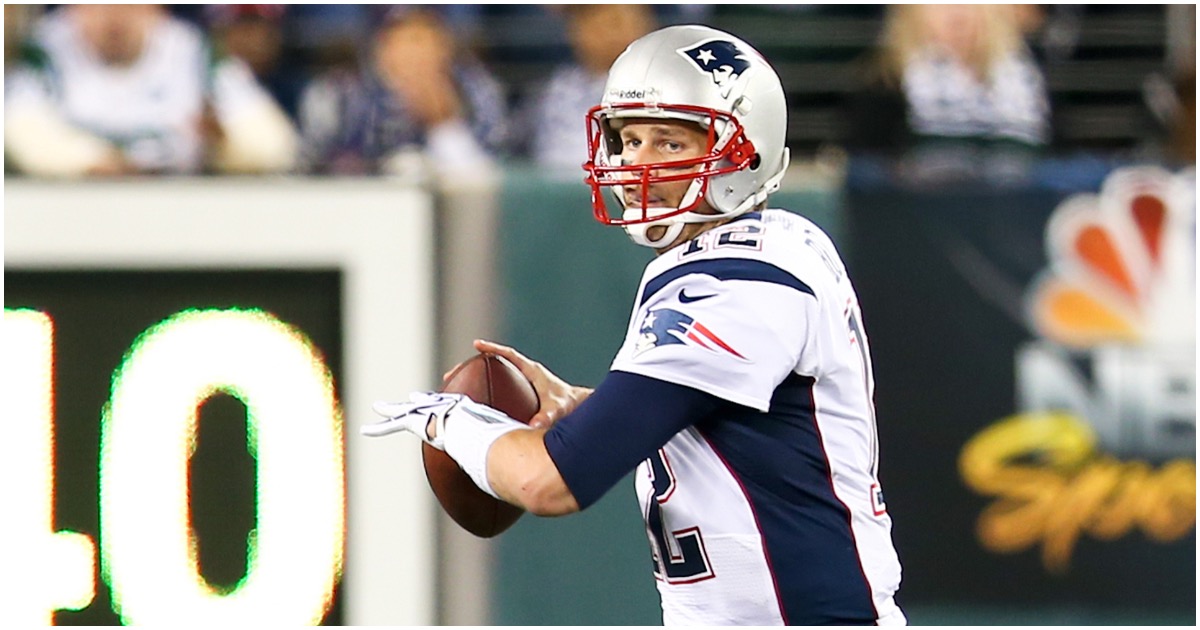 The following article, College Professor Says Tom Brady Is Popular Due to Rise In ‘White Rage & White Supremacy’, was first published on Flag And Cross.

Anyone even remotely associated with President Trump is fair game to liberals.

It’s not right even in the slightest but what can you do?

Check out what this Rhode Island “educator” has to say about POTUS and NFL legend, Tom Brady…

Kyle Kusz, a kinesiology professor at the University of Rhode Island, published a book this month titled “Making American White Men Great Again: Tom Brady, Donald Trump, and the Allure of White Male Omnipotence in Post-Obama America.” He theorized that Brady became popular due to the rise of “white rage and white supremacy,” according to Campus Reform.

Brady’s relationship with the media and President Trump is analyzed in the book, according to Campus Reform. The professor highlights a 2015 Under Armour commercial which depicts thousands of Tom Bradys working out and tells the audience to “Rule Yourself.” Kusz says the commercial “would not seem out of place in Leni Reifenstahl’s infamous Nazi propaganda film, ‘Triumph des willens.’”

Brady was heard masterfully tolling the left during the Super Bowl when he called a “Reagan” audible as heard by the NFL’s field mics.

In the third quarter, the mics on the field caught Brady calling an audible to his team mates and was heard yelling “Reagan, Reagan,” Fox News reported.

Well you know this was my favorite #Superbowl moment with a @ronaldreagan40 shoutout!

“Of course Reagan means run to the RIGHT”

Sure enough, when the play commenced, Brady’s players ran to the right. Romo quickly added what the Reagan audible means: “obviously, Reagan means run to the right.”

Many quickly caught on that Tom Brady was trolling the let with his audible.

The Twittersphere immediately laughed that Brady was “trolling” liberals:

Tom Brady trolls the left with his audible play "Reagan" which apparently means run to the right. https://t.co/MgIGCcevBV

Crap, man, Brady just audibled to “Reagan” in the #SuperBowl so Woke Twitter gonna hate them even more.

Others also caught the Reagan reference and thought it was a masterful choice of terms:

Tom Brady calls for the "Reagan" play. Presumably because the play will trickle down the field.

I love it. Tom Brady shouted Reagan Reagan and then they ran to the right. I officially love Tom Brady and the Patriots are officially the team of the Republican Party. @GOP.

I love it. Tom Brady shouted Reagan Reagan and then they ran to the right. I officially love Tom Brady and the Patriots are officially the team of the Republican Party. @GOP.

Leftism truly is a mental illness. How people dream up such inane and ridiculous conclusions must come from a deranged mind as normal people do not and cannot think like these crazy people. Anyone who would agree with this nut job is a nut job themselves.

Another stupidity statement for the world to see! There is no thing as White Supremacy! What about the black panthers and antifa? Stupidity dominates our world!

Wonder if his winning record as a quarterback has any bearing?

..and YOU…borrowed money to attend a college…to be educated? This guy has a right to his opinions. I…would reserve the right to pull my support from this college, to ask for a refund of all costs associated with this class, and to re-evaluate my decision to be paying for instruction from a college that would employ obvious mental defects to shape young minds.

Kusz has mental illness. It is nothing more than a conspiracy theory. When you are a professor and still live in moms basement, cant expect much more.

Just maybe Tom Brady is popular because of his ability to play football as a quaterback! So what has race or religion have to do with his fame in sports? I remember any athlete when interviewed after a great game would refrence their performance to God, it was never shunned,.

So I guess this “logic(?)” proves that Kaepernick’s popularity just after our first “half-Black” POTUS is proof of black rage and black supremacy…?