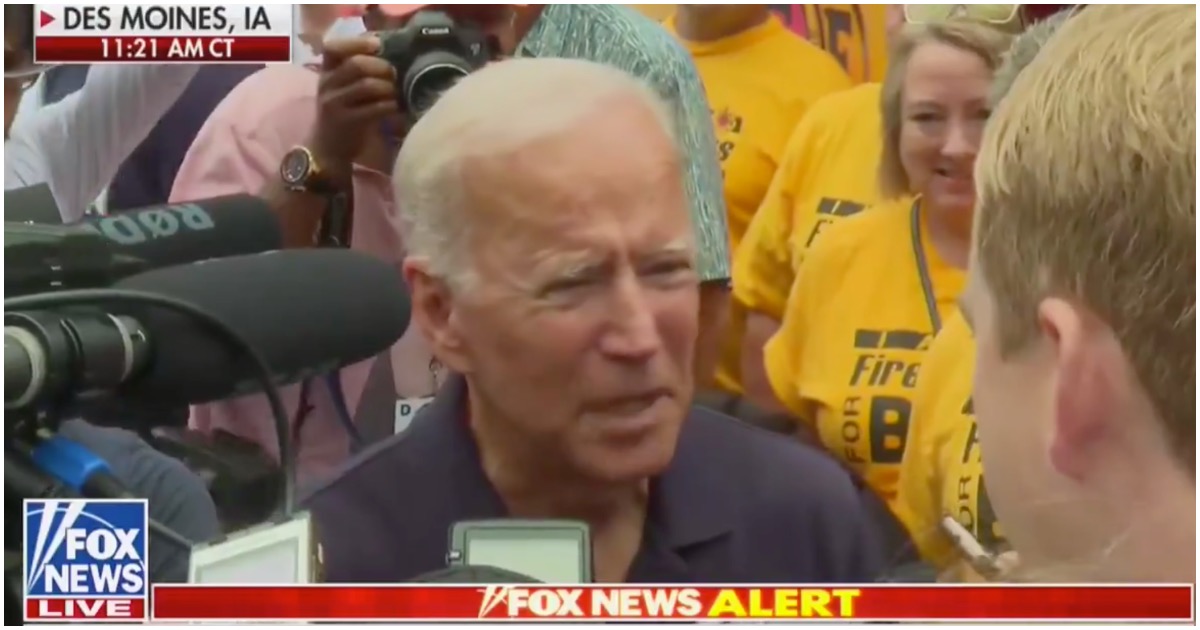 The following article, VIDEO: Biden Comes Unglued When Fox News Reporter Asks Him About Ukrainian Scandal, was first published on Flag And Cross.

You have to hand it to Joe Biden.

When confronted about his alleged Ukrainian scandal, the former VP dodged, deflected, and blamed President Trump like he had that card up his sleeve the entire time.

Democratic presidential candidate Joe Biden exploded on Saturday when Fox News reporter Peter Doocy confronted him over his Ukraine scandal, claiming that he did nothing wrong and that the media should be looking into President Donald Trump.

Doocy’s question for Biden centered around Biden’s admission that he used his position as Vice President to shut down a Ukrainian prosecutor who was investigating a company that was employing Biden’s son.

Doocy pondered, “Mr. Vice President, how many times have you ever spoken to your son about his overseas business dealings?”

Biden screeched, “I have never spoken to my son about his overseas business dealings. And here’s what I know, I know Trump deserves to be investigated. He is violating every basic norm of a president. You should be asking him the question, why is he on the phone with a foreign leader trying to intimidate a foreign leader, if that’s what happened, that appears to be what happened, you should be looking at Trump.”

Here's a problem: Joe Biden *did* discuss overseas business with his son Hunter, at least once. This is from The New Yorker, about 2 months ago. https://t.co/QzfeWoopn7 pic.twitter.com/jOZmV9sQPf

Joe Biden on his Ukraine scandal: “Why's [Trump] on the phone with a foreign leader trying to intimidate [them]?”

Biden in 2016 on what he told Ukraine: “I looked at them and said: ‘I’m leaving in six hours. If the prosecutor is not fired, you’re not getting the money’” pic.twitter.com/IjNgweVH67

This is the real and only story! pic.twitter.com/4z8eOcm6PA

The “basic norms” as President over the last couple generations is what put us in this mess.

Having read and heard of this alleged (biden seen on tape bragging about his involvement) corruption by biden while acting as obama’s vice president, it seemed very likely that it would be investigated and the info brought forward if biden was to become a leader in the dem presidency bid. And too bad as it would have been very interesting if biden was to come up against Trump in debates…. Also doubtful that biden would renew his threat to take Trump behind the wood shed….

“The seriousness of the charge mandates that we investigate this.” “Even though there is no evidence,”

“We have no conclusive evidence of wrongdoing, but the seriousness of the allegations and the weight of circumstantial information compel an effort to establish the facts,”

Welcome to the legal system!

Ukraine volunteered information many times. Evil Obama team members always profess innocence. This action is similar to a virgin in a prostitution house1