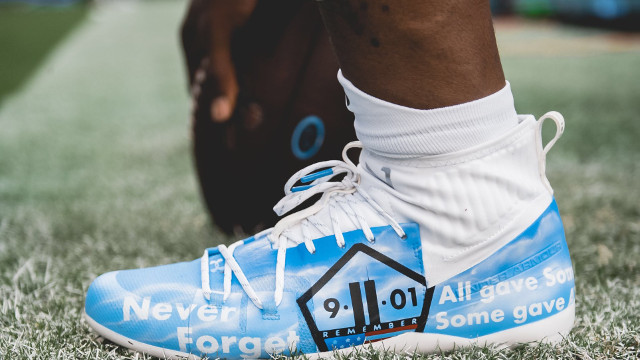 This week saw the 18th anniversary of the 9/11 terrorist attacks, a horrific event in American history that I know I personally will never ever forget.

Lots of folks took to social media to honor the 3,000 lives that were lost that day and the 9/11 first responders who risked everything to save as many lives as they possibly could during the horrific aftermath.

One such individual was Carolina Panthers player Cam Newton, who wore special shoes before Thursday’s game to pay tribute to these heroes.

The Carolina Panthers’ official social media account tweeted images of Newton praying while wearing the shoes before the game against the Tampa Bay Buccaneers.

“Never Forget,” they tweeted, with an emoji symbol of prayer.

Brian Hall of WFMY documented the shoes on his twitter feed as well, indicating that Newton wore them for the warm up session.

Newton has a history of showing support for the first responders, having also worn special shoes to honor the NY fire department on the tenth anniversary of the attacks.

It’s nice to see someone take a knee in the NFL for the correct reason, at the correct time, showing honor to those who truly deserve it.

A lot of players — and former players like Colin Kaepernick — could learn a lot from Cam about how to respectfully engage in issues that matter to them.

Here’s to hoping the rest of the NFL was paying attention.

Guest
IT IS ALL AMERICA EVER ASKED Of Her ATHLETE'S

This is ALL AMERICA has ever asked of her Athletes … A Show Of Strength, Devotion, Leadership, Patriotism and A True Love Of AMERICA and AMERICAN’S. … God Bless You Cam Newton … Your New #1 Fan!