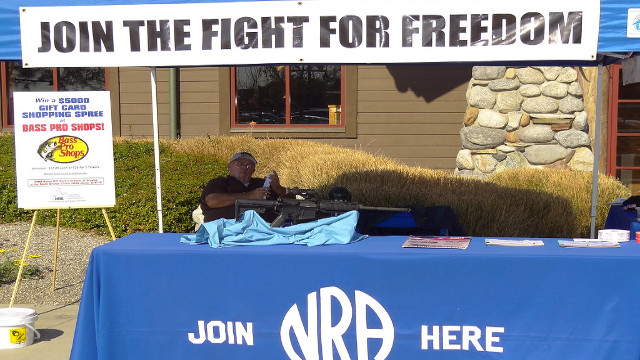 The following article, Terrifying New Poll Says 28 Percent Of Dems Think Being Member Of The NRA Should Be Illegal, was first published on Flag And Cross.

A brand new Rasmussen poll has been released and the results are pretty doggone scary for anyone who believes in the God-given right to own a gun for protection against criminals and tyranny.

According to 28 percent of Democrats, being a member of the National Rifle Association should be illegal.

Yes, that’s right. If you think you have the right to bear arms and seek to be part of an organization that shares your views, think again. The left wants to take that away from you.

As for Republicans, 14 percent agree with deeming the NRA a terrorist organization, and 15 percent said being an NRA member should be illegal, the poll found.

The poll was conducted Sept. 5 and 8, Rasmussen said, adding that the margin of error is +/- 3 percentage points.

The right to own a gun is one that is grounded in our being image bearers of God, our Creator having established in Exodus 22 that all people have the right to defend their own lives, the lives of family, and so on, even if it means committing an act of violence against another human being.

Being part of the NRA is a way for those of us who believe in the critical importance of owning a gun to fellowship with like-minded individuals who share our passion for firearms. If this should be illegal, perhaps all feminist organizations that support the murder of the unborn should be made illegal as well?

Say that to a group of these people who think that way and watch how they respond. It won’t be pretty.

Continue reading: Terrifying New Poll Says 28 Percent Of Dems Think Being Member Of The NRA Should Be Illegal ...

Democrats are opposed to any organization that promotes freedom and love of the Constitution. It was started by Civil war Republicans. Democrats are still mad that Republicans freed their slaves.

Hard to believe there are that many ignorant traitorous bastards voting in the country.

They are the same ones that voted for the illegal communist gay coon Barry O, and his tranny wife.