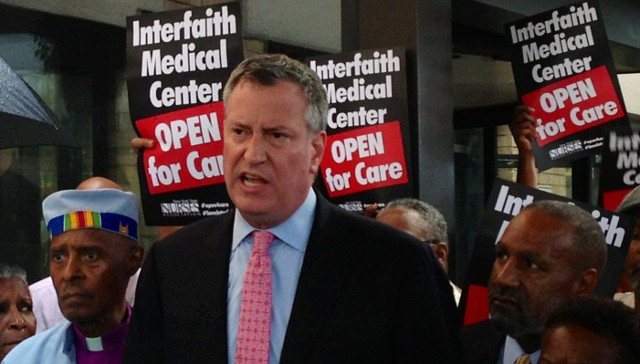 The following article, Democrat Presidential Candidate Bill de Blasio Releases Plan To Confront Robots. Yes, This Is For Real., was first published on Flag And Cross.

Democratic presidential candidates are really trying hard to win their party’s coveted nomination, so they are pulling out all the stops, including, apparently, concocting insane plans to deal with the future robot menace threatening the existence of human jobs.

In response to an article from Wired.com titled, “Why American Workers Need to be Protected from Automation,” de Blasio tweeted, “As President, I would issue a robot tax for corporations displacing humans, and create a federal agency to oversee automation.”

As President, I would issue a robot tax for corporations displacing humans, and create a federal agency to oversee automation. https://t.co/W9JWIFFDaN

In a more detailed statement released on his website, de Blasio claimed that “current automation practices are an existential threat to our nation’s workforce that destroys good jobs and directs more and more of the profits only to the wealthiest Americans.”

In response to this alleged threat, de Blasio proposes to create a new federal agency, the Federal Automation and Worker Protection Agency (FAWPA), which would have “broad authority to regulate the widespread growth of automation and oversee its impact on working people.”

Specifically, the plan states, “Any major company seeking to increase automated operations would be required to seek a permit from FAWPA with approval conditioned on the company’s plans to protect existing workers, either by ensuring they receive new jobs with similar pay or severance packages that reflect their tenure of service to the company.”

The plan also features a plethora of tax increases, including the end of the corporate accelerated depreciation tax break, and get this, a legitimate, honest-to-goodness “robot tax” for businesses who eliminate jobs through automation to “pay the equivalent of five years worth of payroll taxes up front for each worker whose job is eliminated.”

This, ladies and gentlemen, is what socialism gone wild looks like in the 21st century. Essentially, what de Blasio is really trying to accomplish here is to make sure that businesses who switch to automation are still paying taxes as if they had human employees, which really sucks away the bottom line and ends up hurting the company gratefully.

Really, it’s an attempt to punish companies for doing something the government doesn’t like, despite the choice made being beneficial for the company and allowing them to make more profit and create more human jobs.