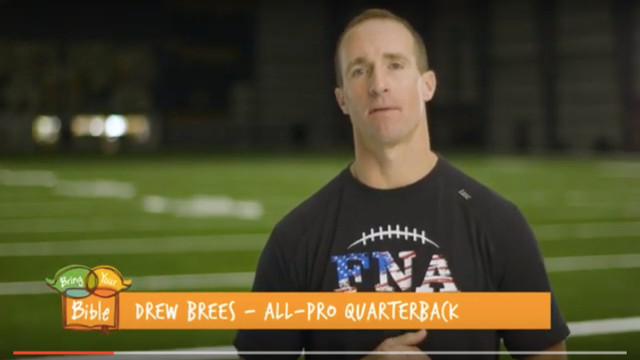 The following article, LGBTQ Activists Blitz Drew Brees Over Support Of ‘Bring Your Bible To School’ Program. His Response Is Perfect., was first published on Flag And Cross.

LGBTQ activists, or more affectionately, the “alphabet people,” are once again up in a tizzy over a Christian doing what Christians do, supporting things Christians should support.

This time the target of their rainbow tinted rage is New Orleans Saints superstar quarterback Drew Brees. Brees is a big supporter of a program that encourages kids to bring their Bibles to school.

Brees has openly been a Christian for a long time, so his support of such a program is not at all a shock, but the perpetually offended folks in the homosexual community are nonetheless attacking him over it.

Here’s a video of Brees talking about his support of the program in question:

Deadspin ran the headline “Drew Brees appears in video for gay conversion therapy sickos, doesn’t understand what the big deal is,” for the story.

Others on Twitter accused Brees of being a “bigot” and aligned with a “hateful group.”

Brees responded to the online furor through a video on his Instagram trying to clear the air and saying that he was falsely smeared by a deceptive article on the story.

“What I did was I filmed a video recently that was encouraging kids to bring their Bibles to school for national Bring your Bible to School Day,” said Brees.

“So I’m not sure why the negativity spread, or why people tried to rope me into certain negativity,” he added. “I do not support any groups that discriminate, or that have their own agendas that are trying to promote inequality. OK? So hopefully that has set the record straight, and we can all move on, because that is not what I stand for.”

Unfortunately, you can almost guarantee that such a statement is not at all going to be enough to appease the radical leftists in modern America. No apologies are ever enough to get them to relent.

They are hellbent on destroying everyone that disagrees with their support of sinful, wicked lifestyles. To be a Christian is not to be tolerant of things God disapproves of.

God approves of reading the Bible. He does not approve of homosexuality. End of the story. That doesn’t mean homosexuals are beyond salvation or that they shouldn’t be treated with respect. They absolutely should be.

After all, they are made in the image of God. They shouldn’t be murdered because of this, nor should they be discriminated against when seeking employment or things like that. However, that doesn’t mean the rest of us must accept their lifestyle as normal.

Nor should anyone who thinks homosexuality is a sin be forced to apologize for holding that view. That goes against everything we stand for as a nation.

Continue reading: LGBTQ Activists Blitz Drew Brees Over Support Of ‘Bring Your Bible To School’ Program. His Response Is Perfect. ...

I hope the Saints never lose another game as long as Drew Brees is on that team.
I hope that whoever spreads false negativity about Drew Brees never win @ anything ever until they apologize to Drew’s face and on all Social media they used to falsely smear this man.
Go Saints from your newest FAN. Love you man, dink

Very well said. NO hate at all. Just taking a stand for Gods standards, no compromise on that. Yet respect fir ALL. Respect does not translate to acceptance!!!!! Example God loves all of us. He died for everyone on the plant. Yet He gives us standards and yes we all will answer to Him when we live against His values yes it’s that simple

Guest
accountable. The evidence is blatant and still no

What a class guy!!!!!!! You are excellent on the Field, And excellent example of what all should BE. Thanks Drew

It seems freedom of speech, religion and thought are only for LGBTQs and Democrats.
Drew Brees is a true Christian and a gentleman, who represents what Christ stood for. God bless him and his family.