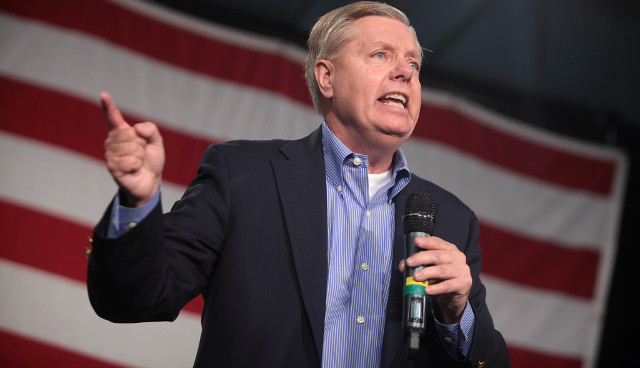 The following article, VIDEO: Lindsey Graham Calls For Obama To Take The Stand. Here’s Why., was first published on Flag And Cross.

Sen. Lindsey Graham recently made an appearance on Fox News where he said that he wants to see former President Barack Obama take the witness stand and answer questions related to what exactly he knew concerning the counterintelligence investigation against Donald Trump’s presidential campaign back in 2016.

All of the individuals who have been involved in that particular train wreck need to come forward and do some serious explaining. Any wrongdoing needs to immediately be punished so at least a little faith in the justice system can be restored.

Host Sean Hannity asked, “Would you agree with Andy McCarthy that any counterintelligence investigation has to have a President behind it and Strzok and Page referred to the White House wanting to know every detail. Does that mean that Barack Obama, the president at the time should be asked what he knew and when he knew it about all this?”

Graham answered, “I can’t imagine an investigation of the Republican nominee for president. Counterintelligence investigation of his campaign was not approved at the highest level. I cannot imagine it happening without somebody in the White House knowing about it. And the question for me is who told Obama. And when you find out who that person is you begin to put the puzzle together.”

Hannity pressed, “Do you think he needs to be asked those questions, sir. Under oath?”

The whole Russian collusion nonsense was just an attempt by the left to crush Trump’s presidency and remove him from office so they wouldn’t have to face him again in the 2020 election.

Well, it looks like their efforts were completely and utterly unsuccessful, so perhaps they ought to spend the remaining time before the election next year actually trying to pull together a coherent platform for voters that addresses the nation’s real problems?

For being a verified Petunia ….! Lindsey sure likes to act & talk tough ….! What does he expect the defrocked Super Queer to say….? ” I learned about it …. uhhhh…. when I ahhhhh… saw it on the uhhhh… news…. same as you…! Besides……uhhhhhhhhhh…. there’s not a smidgeon of lies…. larceny…. thievery…. & felonious murder….! “