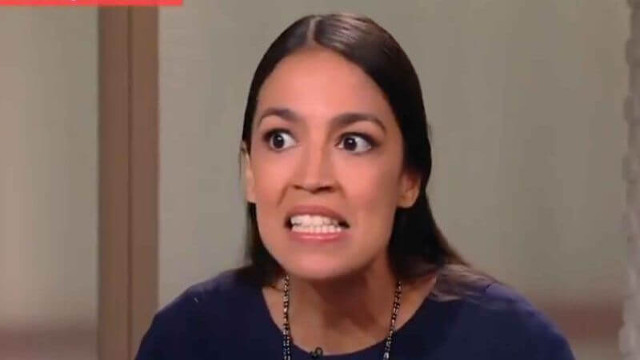 The following article, If You Thought AOC Was Strange Before, Her New Video About Climate Change Takes Things To A Whole New Level, was first published on Flag And Cross.

There’s no denying that Rep. Alexandria Ocasio-Cortez is a strange bird. Not only does she appear to be completely ignorant of basic historical facts and seemingly has no real understanding of how our government works, she’s also apparently cuckoo for Cocoa Puffs over climate change.

AOC recently posted up a very weird video on Facebook Live where she admits that climate change keeps her awake at night and that she’s super scared of diseases that might escape from melting glaciers.

One individual stated they were very concerned about climate change, which prompted the weird response from AOC.

Please, New York. Please. For the love of all that is good and right in this world, do not give this woman a second term. We beg you.

“Even when I was on vacation, I woke up in the middle of the night at 3:30 in the morning, um, just concerned about climate change,” Ocasio-Cortez responded. “I’m 29 years old, I really struggle sometimes with the idea of how to be a policymaker, and potentially have a family in the time of climate change.”

“It really, like, freaks me out and it can be really, really scary,” she admitted.

Socialist Rep. Alexandria Ocasio-Cortez (D-NY) on climate change: “Even when I was on vacation, I woke up in the middle of the night at 3:30 in the morning, um, just concerned about climate change … It really, like, freaks me out and it can be really, really scary” pic.twitter.com/zfkx14JRbi

“There are a lot of diseases that are frozen in some of these glaciers, that scientists fear that there is a potential that a lot of diseases could escape these melted glaciers, things that were frozen for thousands of years, that they could get into our water, and that humans could contract them,” she warned. “They are going to be diseases that are thousands of years old that have vectors that we are not prepared for, that we have never seen, and so that’s a concern.”

“[T]he best thing we can do is be as supportive of climate policy, and to prioritize it, like if you can make climate change one of your top three voting issues, that’s a huge thing you can do, but also if you change your personal consumption, that can do a lot as well,” she insisted.

I’ve said it before. I’ll say it again. This gal is a few Fruit Loops short of a full cereal box. The light’s on but nobody’s home.

The science on climate change is far from settled, yet AOC is in full panic mode over it, demanding folks just sign away their God-given right to keep the money they earn to care for themselves and their families to the government for a cause the might not even be real.

Like I said, she’s loony. There’s no way someone like AOC should be serving in such an important role.

Continue reading: If You Thought AOC Was Strange Before, Her New Video About Climate Change Takes Things To A Whole New Level ...

Crazy Eyed liberal socio loon shouldn’t be afraid of diseases from melting glaciers…. she should be deathly afraid of the oozing stinking stream of homeless mojado cagada sticking to her shoes….!

Doesn’t know history, and failed science class too. Did she get into collage on affirmative action?