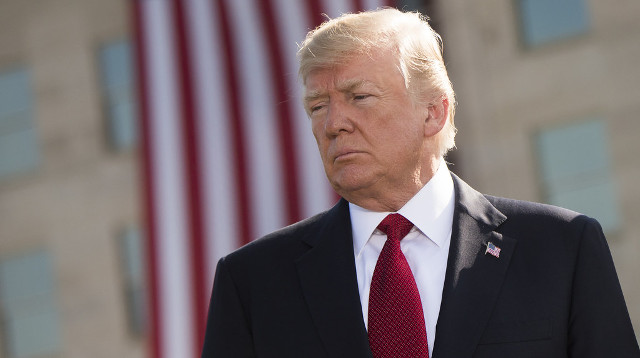 The following article, Trump Responds To Claims He Suggested Using Nukes To Stop Hurricanes, was first published on Flag And Cross.

The news media just loves to take anything and everything President Trump says and turn it into some sort of ridiculous, nonsensical statement designed to make him look insane and incompetent.

The latest such ploy has to do with the MSM saying Trump suggested using nuclear weapons as a means of thwarting hurricanes from making landfall in the United States.

Trump has fired back, stating this, like so much else from the mainstream media, is fake news.

“They start forming off the coast of Africa, as they’re moving across the Atlantic, we drop a bomb inside the eye of the hurricane and it disrupts it. Why can’t we do that?” one source, paraphrasing the president, claimed Trump said during a hurricane briefing at the White House.

A second example being used by the media is from a recording allegedly made in 2017 during the National Security Council memorandum, where the president allegedly floated the idea of using bombs against hurricanes, though he didn’t specifically mention nukes.

The thing to keep in mind here is that the whole concept of using nuclear weapons against hurricanes is not something that Trump cooked up all by himself. The idea itself first popped on the scene in the mid-20th century, coined by a government scientist.

The idea has gained a lot of popularity over the years, prompting the National Oceanic and Atmospheric Association to come out and issue explanations for why it’s a horrible idea to use this particular strategy.

So how did Trump respond?

The story by Axios that President Trump wanted to blow up large hurricanes with nuclear weapons prior to reaching shore is ridiculous. I never said this. Just more FAKE NEWS!

Still, White House officials who spoke with Axios said that Trump did, in fact, make the suggestion — but it should not be cause for concern.

“His objective is not bad,” one official said. “His goal — to keep a catastrophic hurricane from hitting the mainland — is not bad.”

“For me, alarm bells weren’t going off when I heard about it, but I did think somebody is going to use this to feed into ‘the president is crazy’ narrative,” another official told Axios.

Let’s just say that, for the most part, using nuclear weapons for anything is pretty much a bad idea and thus to be avoided if possible.

That should go without saying, but in today’s world, it’s better to cover all your bases.