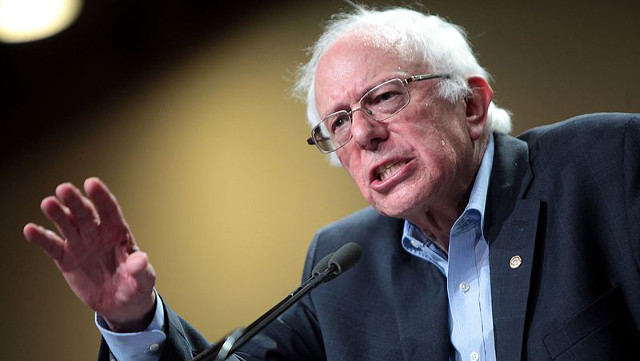 You could take any two Democrats running for office today and plug them into the lead roles of a future Dumb & Dumber sequel.

That’s how ridiculous these people have become.

2020 contender Sen. Bernie Sanders is going big on Thursday with the announcement of a $16.3 trillion energy and climate change plan.

Sanders’ plan calls for 100% renewable power and transportation systems by 2030 and decarbonizing the whole U.S. economy by 2050. The plan explicitly calls itself a Green New Deal, the sweeping idea popular on the progressive left.

In a recent rant, the 2020 presidential hopeful went off on President Trump like not seen in a little while.

Sanders didn’t hold back while speaking with MSNBC on Tuesday when host Andrea Mitchell asked the Vermont Senator about President Trump’s declaration that he planned to live tweet the first Democratic debate next week.

“Look, he can tweet all that he wants to tweet, but let me just say this,” Sanders said in response. “You have a president who, despite what one of his supporters mentioned a moment ago, is, in fact, a pathological liar, he is a racist, he is a sexist, he is a homophobe, and he is a religious bigot.”

So what we are just literally offering free health care to the whole world basically ?

Free stuff for everybody and I mean EVERYbody!

This is atrocious to all American taxpayers!

I wonder if Bernie like to be the first to donate all his millions to healthcare for illegals otherthan talk BS. Another BS is the trillions for climate change that no other country all contribute so US has to foot the bill. Bernie has forgotten how read and listen, he just hears what he can choose to make it sound like racism which makes Bernie the racist.

THAT AWKWARD MOMENT WHEN ZOMBIES WALK PAST A DEMOCRAT CONVENTION AND NEVER STOP!