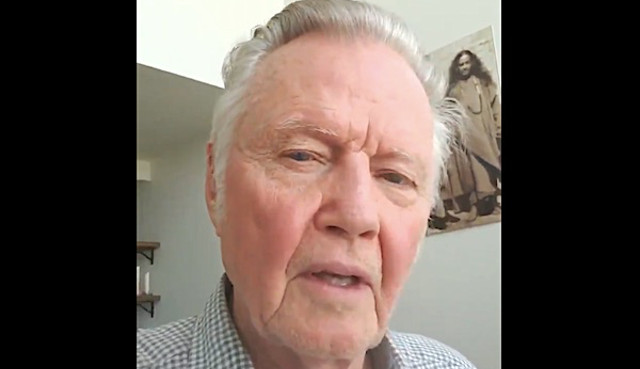 Actor Jon Voight has not been shy about his support for President Trump, and he continues to be one of the few outspoken conservative voices in Hollywood, which in and of itself is a tough gig.

Yet, no matter the hate he gets, he continues to fearlessly proclaim what he believes in, with no worry of the consequences. In fact, Voight just released a new video where he praises Donald Trump and slams folks on the left for their attacks on the president.

Voight started by targeting the Left:

This is not peace. This is not love; this is hate among the radical Left. No amount of “book-smart” will show the given policy of what truth stands for. Truth is a powerful emotion. Love is what we should be voting for, and I must say that we, the Republican party, have voted for renewal, for a place of safety, a community where all can have peace.

But this is war among the Left; they have hate; it’s like a venom. No words of God, no words of love, but a radical emotion of hate.

He segued to the president: “I’ve said this many times and I am saying it again from the deep truths of my heart and soul: President Trump is a man of truths, love and justice for the American people and also for the people of a sacred place: Israel. Not only does he love our country, the United States of America, but he has a love for the people of all nations. “

Voight concluded with the hope that members of the Left would put aside their hatred and stand for liberty and justice: “Let us pray for peace; let us pray for this country, that President Trump will take on four more years of his strength, devotion, knowledge of truths. And all that doubt and have extreme hate and anger toward President Trump, may they be shown differently. That President Trump is the greatest president of this century. Let us take a stand for liberty and justice for all. God bless.”

This is truly a breath of fresh air, especially when you’re used to seeing nothing but hate for Trump and conservatives all over Twitter from ridiculous actors looking for new ways to stay relevant in the public eye.

Many of these individuals just want to keep movie deals and product endorsements coming in and they think looking “woke” will help them stay relevant and keep those checks rolling.

Hopefully, the boldness of Jon Voight will inspire closet conservatives in Hollywood to come out and fearlessly proclaim the truth as well.