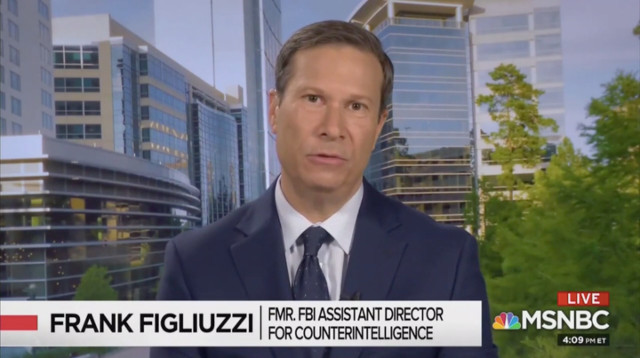 Frank Figliuzzi, former Assistant Director for Counterintelligence at the FBI, has become notorious for his rabid anti-Trump rhetoric, which he recently doubled down on, lobbing one of the worst insults you could possibly toss in the direction of a Trump supporter.

He called them members of a terrorist organization.

Apparently this guy has Trump supporters confused with Antifa members, which, for those who don’t know, are raging left-wingers. That means they’re from Figliuzzi’s side of the tracks, not ours.

As Newsbusters reports, Figliuzzi, who retired from the FBI in 2012. worked at General Electric for five years, and now is National Security Contributor for NBC News, appeared on MSNBC’s “Deadline: White House” with host Chris Jansing. The discussion revolved around whether it would be smart for Democrats to accuse Trump supporters of racism because they supported an allegedly racist president.

Jansing prodded, “I think one of the things, Frank Figliuzzi, is that this president has always, from anyone who was around him, Anthony Scaramucci knows this as well as anybody else, demanded this blind loyalty, right? ‘I say it, it must be so. Or even if you don’t think it’s so, you don’t criticize me for it.’”

Figliuzzi responded, “Well, this is why it’s so important to look through the lens of radicalization when you look at this president and then apply counterradicalization techniques. Because you’re right, attacking his followers is going to be counterproductive. He demands that loyalty, and they are loyal. So if you call Trump followers racist en masse, they simply coalesce around each other and become even more defensive and protective of the leader, just as they would in, say, a terrorist organization …”

As The Daily Wire reported last week, Figliuzzi speculated that the White House had ordered flags flown at half-staff to honor the victims of the mass shootings in El Paso and Dayton to be pulled down on August 8 because 8/8 was code for Heil hitler, and thus a secret message to white supremacists.

This man is certifiably insane, folks. President Trump is not some closet Nazi and neither are his supporters. This is a cheap tactic to distract folks from talking about the real issues that are of concern to American citizens.

All the left knows how to do is come after Trump and those who support him. They do absolutely nothing to get better connected to the people they claim to want to represent. Doing so would require work and most of them just want to collect that free welfare they get as part of their salary, which we all pay for.

Mr Figliuzzi is just a typical ignorant bureaucrat who lived off of the taxpayers his entire live! He could never handle a job on the real world. What a loser🤮

Fuck Figalucy He’s yet another lying, deceitful,ly corrupt ( and likely very guilty of a felony himself), liberal socialist progressive marxist facist that has infiltrated our Intelligence agency.

We’ll likely hear about him being brought up on charges before long. Go Trump 2020 !

I imagine we do Terrorize the Left in our persistence on having our Constitution as the Rule of Law!

Have you ever noticed that all Loonz look Goofy ….?

Why does this Deep State enabler still have a job? He obviously has forgotten the oath he swore to get the job…”I swear I will protect and defend the Constitution of the United States of America against all enemies, foreign and domestic, and that I will bear allegiance to the same.”