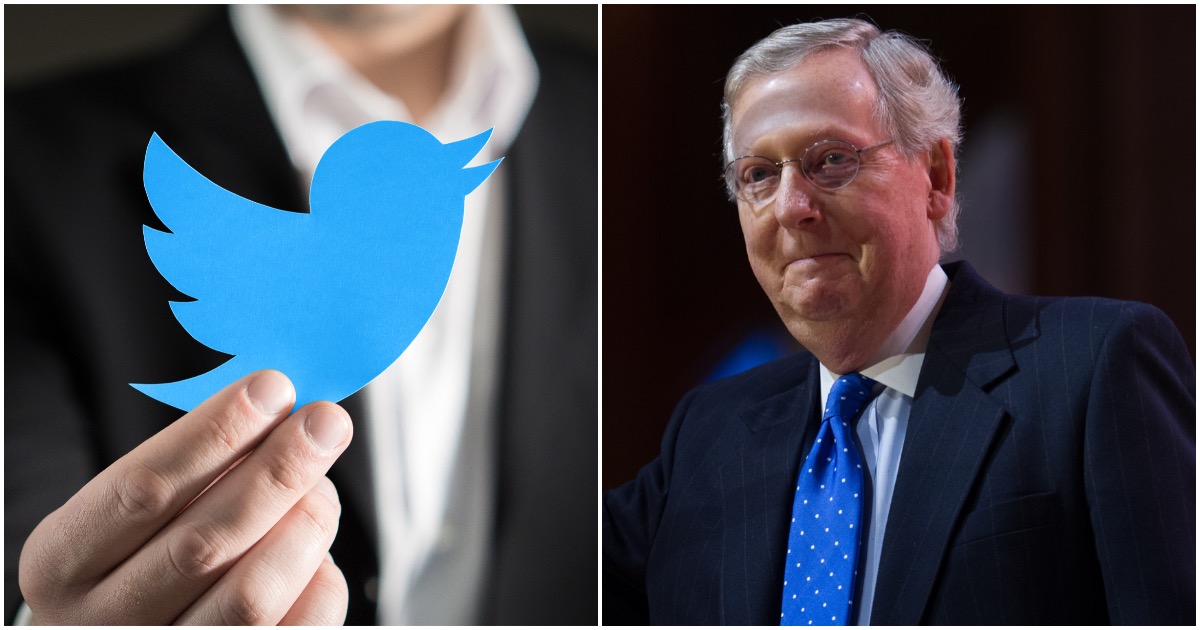 The following article, Twitter Forces McConnell Campaign to Remove Video of Violent Threats Made Against HIM, was first published on Flag And Cross.

It’s quite stunning that the left refers to conservatives and fascist when all they do is nothing but attempt to silence those with whom they disagree.

But that will remain the narrative so long as Democrats control the mainstream media and Hollywood. Their message will always be spread to the masses.

On Monday night, dozens of left-wing activists converged on the Louisville home of Senate Majority Leader Mitch McConnell to protest for gun control. Video of one of the protesters, Black Lives Matter activist Chanelle Helm, calling for violence against McConnell — initially posted on Facebook and then tweeted out by congressional staffer Ben Goldey — quickly went viral, retweeted by the McConnell re-election campaign and Daily Wire reporter Ryan Saavedra. By Tuesday, Twitter had locked all three accounts until they pulled their posts featuring the video.

In the since-pulled video, which was first live-streamed on Facebook, one of the protesters says about McConnell’s recent shoulder injury that maybe someone is using a “voodoo doll” against the senator. Helm responds, “Just stab the motherf***er in the heart, please.” She went on to say she hopes he suffers “one of those heart attacks where they can’t breath, and they’re holding their chest and they fall backwards.” Instead of nursing a “broken arm” after his fall, she said, “he should have broken his raggedy, wrinkled-ass neck.”

It showed a person allegedly calling for violence against Mitch McConnell

I told Twitter that their logic did not make sense, that they wanted the tweet for McConnell's safety, because of many of the tweets they leave up and claim do not violate their rules

I pointed out these tweets to Twitter as examples: https://t.co/wpgQFUEEd1 pic.twitter.com/dqnWtLwQv9

This pic is of Covington Catholic High School student Nick Sandmann, who was falsely smeared by the media

Sandmann and his school received death threats over what happened

Of all the wild and crazy ideas that we’ve heard floated around the left side of American politics, there may be none currently zanier than the following.

After select portions of a hotly contested incident between a Native American protestor and a teenage boy went viral this weekend, one democratic Senator has decided that staunch, authoritarian fascism could be the solution to our nation’s tension.

I am calling for a total and complete shutdown of teenagers wearing MAGA hats until we can figure out what is going on. They seem to be poisoning young minds. [1/2] https://t.co/yq5bLd4kE2

Yarmuth’s tweet may not age well, however, as video evidence of the entire scene is slowly emerging via the internet.  The reality of the situation was far different than the selective images that the mainstream media have been using.

Not to mention the fact that the Native American man involved seems to find himself in these situations far more often than your average activist.

Here is a clip from 2015 in which he was similarly disparaged after he approached a group of college kids.

Continue reading: Twitter Forces McConnell Campaign to Remove Video of Violent Threats Made Against HIM ...

Let’s not accuse the dems of wrong doing. They will call you a racist. It isn’t o.k. to threaten a liberal ,but one is praised to threaten a conservative. As the old saying goes,”Accuse others of what you are guilty of”.

It is amazing that you don’t hear of read of a conservative threatening violence or destruction only liberals do that. Must mean they are always on the wrong side of the fence on issues that concern the country.