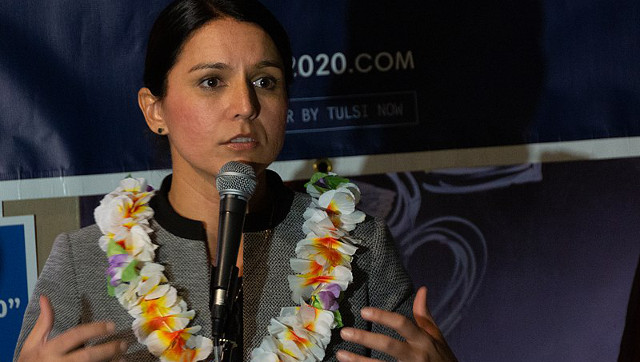 The following article, Tulsi Gabbard Explodes Like A Shaken Soda Pop After Being Pressed About Bashar Al-Assad Meeting, was first published on Flag And Cross.

Democratic presidential candidate Tulsi Gabbard was none too happy about being pressed on the meeting she had with Bashar Al-Assad by MSNBC, exploding all over like a shaken can of soda pop.

Al-Assad is the president of Syria and is the degenerate dictator who is responsible for gassing children to death in his own country. Sounds like a stellar guy, right? Who wouldn’t want a meeting with that kind of fellow?

Gabbard’s fire was directed at MSNBC host Yasmin Vossoughian, who asked Gabbard about her January 2017 meeting with al-Assad when she visited Syria.

“When sitting down with someone like Bashar al-Assad in Syria, do you confront him directly and say, why do you order chemical attacks on your own people?” Vossoughian asked Gabbard. “Why do you cause the killings of over half a million people in your country?”

“You’re talking about a meeting that took place, what, three years ago?” Gabbard fired back. “And every time I come back here on MSNBC you guys talk to me about these issues, it sounds like these are talking points that Kamala Harris and her campaign are feeding you because she’s refusing to address the questions that were posed to her.”

“Congresswoman, it’s important, I think, for the American people to have context about your foreign policy issues and where you stand,” Vossoughianm replied. “If you’re leading with foreign policy and running for President of the United States. A meeting with Bashar al-Assad, which I’m sure you understand, is a very controversial meeting to take.”

Gabbard fired back by saying, “Every single time for three years? This is where the propaganda comes in because I’ve talked about this a lot for the last three years.”

After the Democratic presidential debate on Wednesday evening, CNN anchor Anderson Cooper repeatedly asked Gabbard if she thought al-Asssad was a murderer. It took awhile, but she finally said that he was.

Tulsi Gabbard explodes on MSNBC after they repeatedly press her for meeting Bashar al-Assad, who gasses children: "these are talking points that Kamala Harris and her campaign are feeding you because she’s refusing to address the questions"

Have you all noticed just how common it is for folks in the Democratic Party to have connections to individuals who are, shall we say, “unsavory?”

The Clintons are connected to child sex slavers, Gabbard is seemingly cozy with al-Assad, and Sen. Kirsten Gillibrand has connections to the leader of the creepy NXIVM sex cult.

And the left wonders why the vast majority of folks in this country no longer trust them? Really?