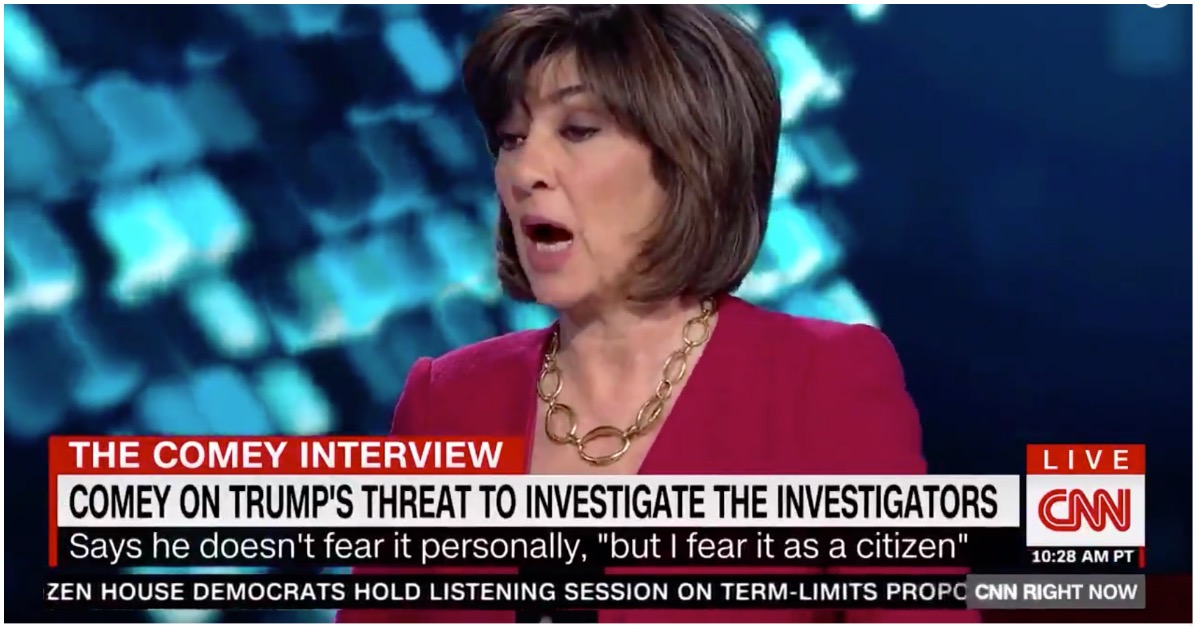 The following article, FLASHBACK: CNN Host Says ‘Lock Her Up’ Is Hate Speech, Wants the Phrase Banned, was first published on Flag And Cross.

CNN host Christine Amanpour believes the words “lock her up,” a direct hit on twice-failed presidential nominee Hillary Clinton dating back to 2015, should be classified as “hate speech.”

She actually thinks this.

Even worse? She wants the phrase banned.

You couldn’t make this up if you tried.

During an interview with former FBI Director James Comey on Tuesday, CNN host Christiane Amanpour said that Trump supporters chanting “lock her up” qualified as “hate speech” and went as far as suggesting that the government should have banned people from saying it.

“Of course, ‘Lock her up’ was a feature of the 2016 Trump campaign,” Amanpour said. “Do you, in retrospect, wish that people like yourself, the head of the FBI, I mean, the people in charge of law and order – had shut down that language? That it was dangerous potentially, that it could have created violence, that it’s kind of hate speech? Should that have been allowed?”

James Comey, surprisingly, disagreed with Amanpour, noting, “That’s not a role for government to play. The beauty of this country is, people can say what they want, even if it’s misleading and it’s demagoguery. The people who should have shut it down were Republicans who understand the rule of law and the values that they claim to stand for. Shame on them, but it wasn’t a role for government to play.”

CNN’s Christiane Amanpour says that the chant “Lock Her Up” was hate speech during the 2016 election and suggests the government should have infringed on American’s First Amendment rights and banned people from saying it pic.twitter.com/4Ec7UCfUk7

Amanpour clearly – CLEARLY – does not understand the point of the First Amendment.

Former Stormy Daniels lawyer, Michael Avenatti, was arrested on Monday for alleged bank and wire fraud in both California and New York.

Reportedly, he attempted to extort Nike for $20 million.

Avenatti had dreams of a 2020 run for president before being canned by Daniels, among numerous other problems over the past few months.

A man said to be a co-conspirator in the Avenatti scheme is the celebrity lawyer of hate crime hoaxer Jussie Smollett, former quarterback Colin Kaepernick, and many others.

“The co-conspirator in that matter is attorney Mark Geragos, two people familiar with the matter said,” the Journal reported. “According to the complaint filed in New York, Mr. Avenatti and Mr. Geragos, the alleged co-conspirator, met with lawyers for Nike in New York on March 19 and threatened to release damaging information unless the company agreed to pay the two lawyers millions of dollars and another $1.5 million to the client Avenatti claimed to represent.”

Mark Geragos has represented Jussie Smollett and Colin Kaepernick, who recently settled with the NFL for less than $10 million. https://t.co/O7TDnCQZNF https://t.co/z9F3RNnZPY

Breaking: @CNN spokesperson says @markgeragos is no longer a CNN contributor. Appears he's been let go over his alleged involvement in this: https://t.co/Z1PRPK32mz

Stormy Daniels is not surprised that Avenatti was arrested.

She tweeted, “Knowing what I know now about Michael Avenatti, I am saddened but not shocked by news reports that he has been criminally charged today.“

Hillary should be locked up and so should Omar, but the Dems will not allow it.

I want this idiot banned!