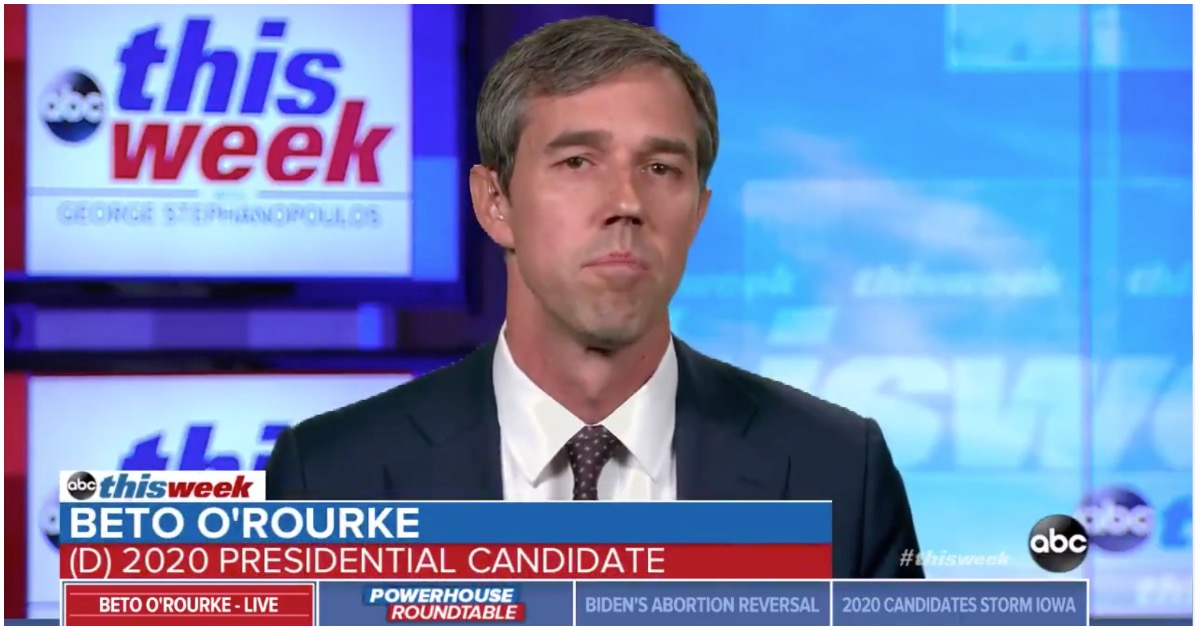 The following article, Beto Goes On Live TV, Says If I Become POTUS I Will Prosecute President Trump (Watch), was first published on Flag And Cross.

“Beto” was asked if he’d prosecute President Trump if he became POTUS.

The failed Senate candidate replied, “yes,” he would.

STEPHANOPOULOS: “Even if the House impeaches, the Senate isn’t going to convict the president. If you win in 2020, would you the Justice Department to pursue charges against President Trump?”

O’ROURKE: “I would want my Justice Department, any future administration’s Justice Department to follow the facts and the truth and to make sure at the end of the day there’s accountability and justice, without this, without that, this idea, this experiment of American democracy comes to a close. We were attacked unlike any other time in our 243-year history and we have a president who yet to acknowledge it and a president who has yet to be brought to justice. Yes, no matter who that is.”

"He did," Beto O'Rourke says when asked if Pres. Trump committed crimes that can be prosecuted.

If “Beto” nabs the Democrat nomination, he may choose Georgia flag-burner Stacey Abrams as his running mate.

O’Rourke is one of those people.

Check him out. He’s standing in the forest – alone.

He’s gesturing wildly like he just shotgunned a Red Bull.

And he’s yelling at you because he wants to “mobilize” $5 trillion to fight against…..the weather.

The former police officer who arrested Beto O’Rourke for driving drunk in 1998, along with the sergeant who signed the incident report, both say they believe now what they reported at the time: that O’Rourke tried to leave the scene of the wreck he caused.

It’s so tiresome listening to these morons blowing carbon emissions out of their pie holes and other end…. this is where their so-called climate change comes from!!! All they spew is hatred and LIES…..totally misinformed on every issue and sound like a bunch of parrots repeating the same misinformation and lies over and over and over and over…..ad nauseam!!!!!

Again and again I ask; where in Muellers report does it say a crime was commited but yet you claim a crime was commited. It says that obstruction may have been determand but not commited so there is no crime. But if you think that is enough to be a crime then if I think badly you is that a crime? Give me a break..

This idiot could not find his rectum with two hands! LOSER big time!