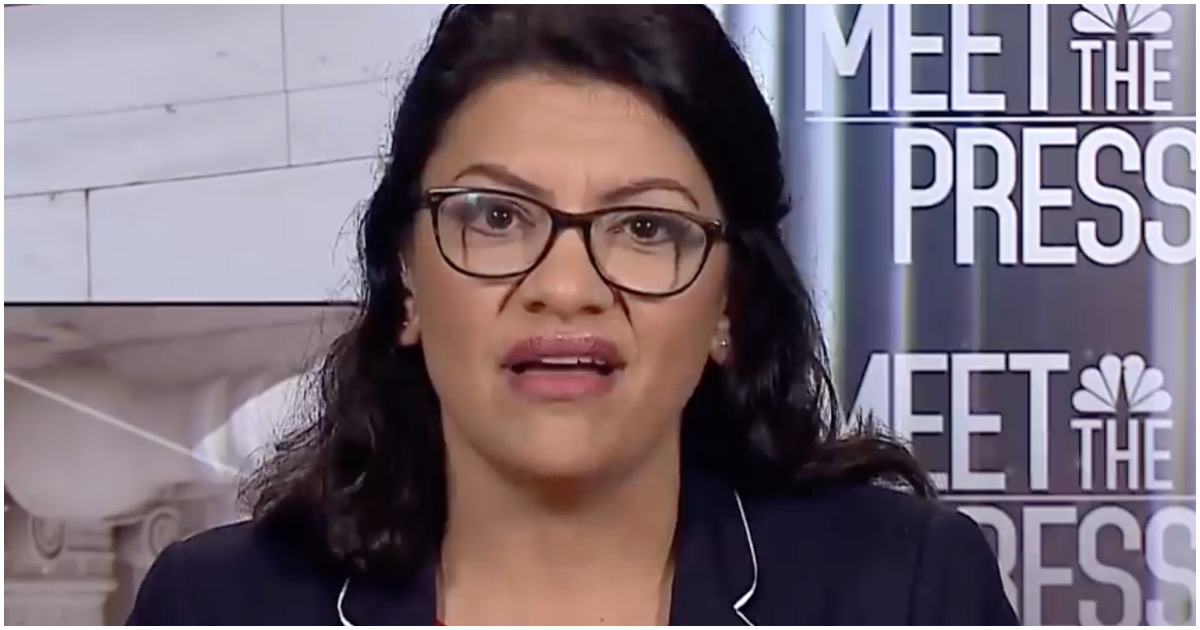 It’s funny how the left loves them some law and order when it comes to getting Trump out of office, despite no crimes having been committed.

Rashida appeared on “Meet the Press” with Chuck Todd.

Check this out, per Fox News:

Rep. Rashida Tlaib believes the House of Representatives is “moving towards” the support necessary to bring impeachment proceedings against President Trump.

Speaking on “Meet the Press” Sunday, Tlaib, D-Mich., was asked by Chuck Todd why a majority of House Democrats do not already support impeachment.

She said, “I think it’s moving towards that. It’s going to demand it, it already is.”

Tlaib added, “This is not about the 2020 election. It’s about doing what’s right now for our country. This is going to be a precedent that we set when we don’t hold this president accountable to the rule of the law and to the United States Constitution.”

44 apparently told Tlaib, who is famous for saying she’ll impeach “that motherf***** Trump” and draping herself in the Palestinian flag after winning her election, that he was “proud” of her.

The freshman Democrat tweeted a picture of her standing with Obama, writing that he “met with us new members of Congress and we had a thoughtful discussion about serving our country.”

“The best part was when he looked straight at me and said, ‘I’m proud of you,'” Tlaib

.@BarackObama met with us new members of Congress and we had a thoughtful discussion about serving our country. The best part was when he looked straight at me and said, "I'm proud of you." pic.twitter.com/cPDOth0B5i

Tlaib made some very interesting comments about the Holocaust.

She noted, “There’s always kind of a calming feeling I tell folks when I think of the Holocaust, and the tragedy of the Holocaust, and the fact that it was my ancestors — Palestinians — who lost their land and some lost their lives, their livelihood, their human dignity, their existence in many ways, have been wiped out, and some people’s passports. And just all of it was in the name of trying to create a safe haven for Jews, post-the Holocaust, post-the tragedy and the horrific persecution of Jews across the world at that time. And I love the fact that it was my ancestors that provided that, right, in many ways. But they did it in a way that took their human dignity away and it was forced on them.”

One could wish Talib, Omar and AOC would shut up. Do you ever see them with their mouths closed? I didn’t think so.

The democraps have nothing to impeach Trump with! All those who accuse need to be removed from office for not understanding or learning about the laws of the land! Really! How long has it been that Congress has done anything productive for the people?

It’s so disturbing to constantly hear these un-American non-Americans as they talk about OUR U.S. constitution when it’s so obvious that they have no respect for OUR constitution nor for real Americans. Yes, I do not consider these people brought into OUR country, many by obama, as real Americans as their real reason for being in America appears to be for the destruction of America.