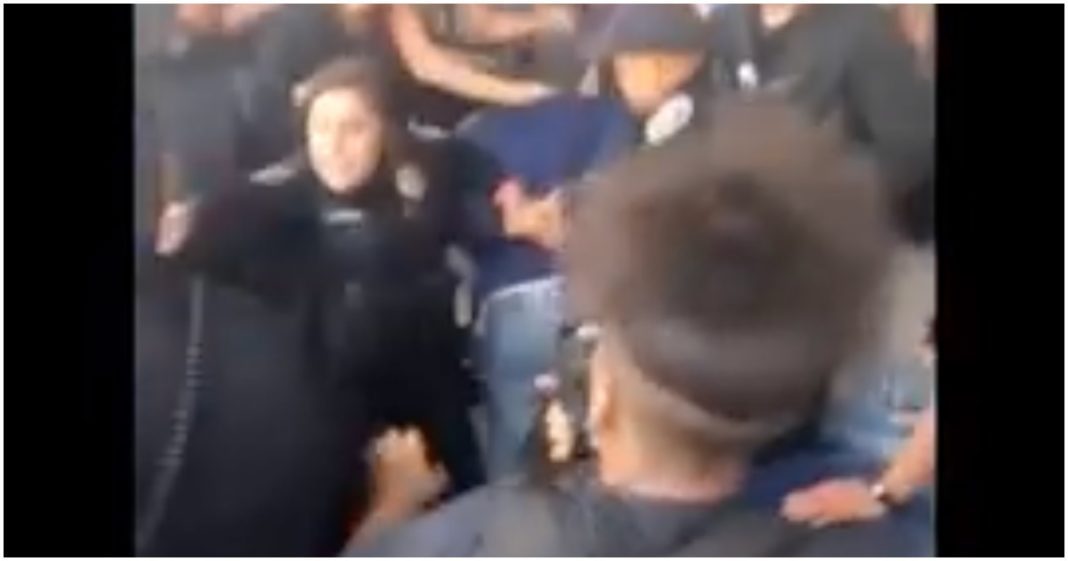 Police officers are shown zero respect nowadays by younger people thanks to a certain political party.

They see Congressional Democrats demonize cops on a daily basis, so they figure they can get away with anything.

Here’s a mob of high schoolers going after cops for detaining their fellow student, from MyFox8 via Right Scoop:

A California high school was on lockdown Friday afternoon after an all-out brawl ensued between students, teachers and police. The incident was caught on video.

It happened at Bear Creek High School in Stockton at about 10:45 a.m., prompting the Lodi Unified School District to place the school on lockdown for close to 90 minutes.

A former student said fights were common at the school, but after seeing the video of the incident – that began with a single student fighting with a staff member – everybody agreed the situation was extreme.

Another officer was merely trying to do his job when he was kicked in the head by a student.

He was restraining a student at the end of a high school brawl in south Florida.

What happened next is an absolute abomination.

There are no words…

Student kicks officer in the head as he holds down another student after a fight at #Homestead High School. Hear from the mother of one of those students at 11pm on @nbc6. She says she is “livid”. pic.twitter.com/4R0mIUCLFm

If this kid is not expelled and charged with assaulting an officer then we all might as well just quit right now.

The level of disrespect certain Americans today show for law enforcement (of any kind) is beyond the pale.

The student needs to be held accountable to the fullest extent, no if’s, and’s, or but’s – PERIOD.

The fact that the student was attempting to rip the officer off of the other student before the kick to the face should be enough to warrant a major penalty.

We’ll have to wait and see what happens.

In other “education” related news…It’s not safe to be a young Trump supporter in school these days.