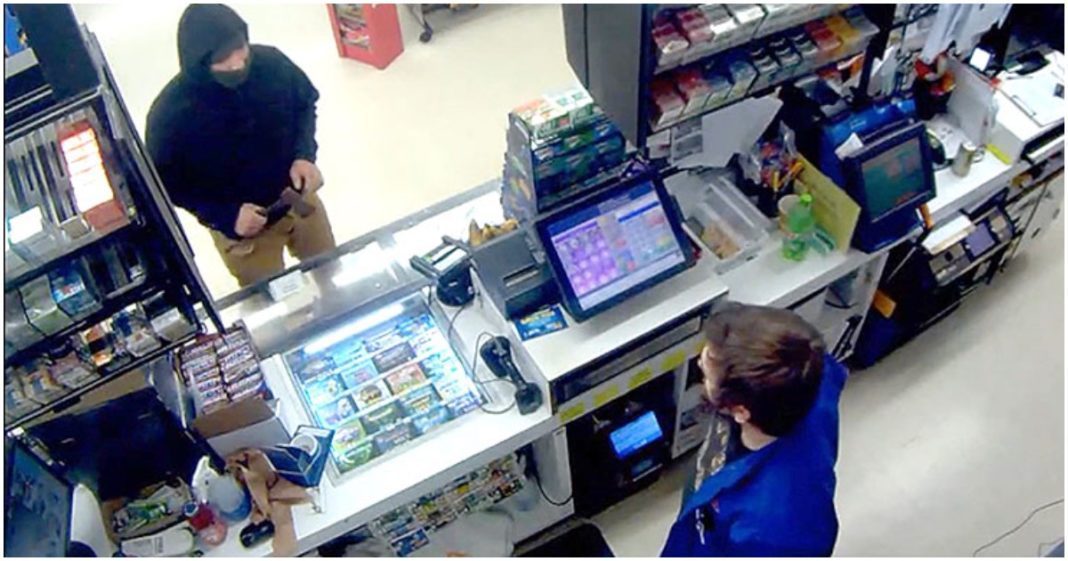 The following article, WATCH: Employee Gets FIRED For Defending Himself With A Gun After Robber Pulls Out Hatchet, was first published on Flag And Cross.

America is quickly going the way of Europe when it comes to nonsensical gun policies.

He was fired for defending his own life!

Oregon authorities are seeking a would-be thief who was armed with a hatchet when he tried to rob a convenience store, only to flee when the clerk drew a gun and called 911.

However, the clerk’s quick thinking cost him his job, with the president of Plaid Pantry in Oak Grove explaining to local station KOIN-TV that the chain has a zero-tolerance policy for weapons.

He said employees are trained to de-escalate robbery situations to avoid injury, according to the station.

The Clackamas County Sheriff’s Office on Friday released surveillance video of the incident which took place April 28 at the store, seeking tips in identifying the suspect who fled empty-handed and without the 12-inch hatchet.

Five people were gunned down in Aurora, Illinois in February. Five police officers were also shot.

Not long after the attack, former First Daughter Chelsea Clinton and her fellow Democrats called for gun control.

This is par for the course in liberal circles.

Of course, that certainly doesn’t make it right.

Thoughts & prayers for Aurora. Holding all affected in my heart.
Incandescent fury for the lawmakers in Washington and various state capitals who have done nothing to prevent mass shootings. It’s never too early to talk about gun violence prevention – it’s always too late. https://t.co/EGrp8MSaQj

We can end mass shootings. https://t.co/qLJbNviJQF

My thoughts are with the people of #Aurora as yet another community in our country deals with senseless tragedy. Gun violence is a national epidemic, and it’s taken Congress far too long to address it.

Another damn mass shooting.
When.
Will.
We.
Wake-Up.
I am a big 2nd Amendment supporter. I own guns. Am well trained in their use. BUT ENOUGH IS ENOUGH. Congress DO SOMETHING on a bi-partisan basis. This is our REAL #NationalEmergency #Aurora

100 people die from guns every day. That’s a national emergency.

If Trump gets away w this border emergency declaration, then a Dem President can declare a gun violence emergency and institute universal background checks and an assault weapons ban by executive action.

Democrats really hate the idea of Americans being able to protect themselves.

Continue reading: WATCH: Employee Gets FIRED For Defending Himself With A Gun After Robber Pulls Out Hatchet ...