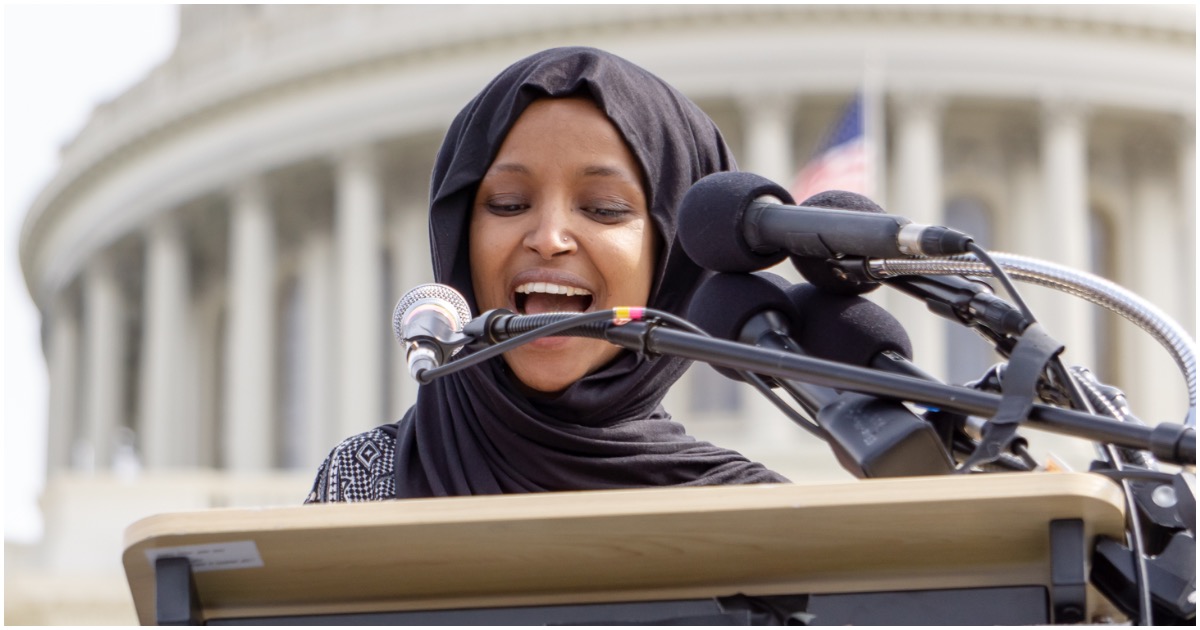 The following article, Powerful Moment As Hundreds of Jews Take to NYC Streets & Demand ‘OMAR MUST GO!’ (Watch), was first published on Flag And Cross.

To say Democrat Rep. Ilhan Omar is a friend of the Jews is like admitting Alec Baldwin does a good Trump impersonation on “Saturday Night Live.”

It’s just not true, no matter how anyone attempts to spin it.

In New York City, hundreds of Jews took to the streets to protest the embattled Congresswoman.

Hundreds of Americans gathered in Times Sq to send @thedemocrats a msg: @Ilhan Must Go! Off the FA Cmte!

If she isn’t removed, & Jewish Reps remain silent their seats won’t be safe in 2020. Silence is complicity & the Dems seem to have placed their bet on the antisemitic horses! pic.twitter.com/KbdarvT3Bs

Apparently, Omar has been holding secret fundraisers with Islamic groups that are tied to terror.

Food for thought, at the very least.

Democratic freshman Rep. Ilhan Omar (D., Minn.) has been holding a series of secret fundraisers with groups that have been tied to the support of terrorism, appearances that have been closed to the press and hidden from public view.

Omar recently spoke in Florida at a private event hosted by Islamic Relief, a charity organization long said to have deep ties to groups that advocate terrorism against Israel. Over the weekend, she will appear at another private event in California that is hosted by CAIR-CA PAC, a political action committee affiliated with the Council on American Islamic Relations, or CAIR a group that was named as an unindicted co-conspirator in a massive terror-funding incident.

Vice President Mike Pence often remains quiet while working on behalf of the nation as the president’s right-hand man.

However, the VP decided to make it known back in February that he was ticked off with Ilhan and her anti-Semitic tweets.

In other words, she needs to resign.

.@IlhanMN tweets were a disgrace & her apology was inadequate. Anti-Semitism has no place in the United States Congress, much less the Foreign Affairs Committee. Those who engage in anti-Semitic tropes should not just be denounced, they should face consequences for their words.

President Trump, too, said Omar needs to step down.

President Trump on anti-Semitic Rep. Ilhan Omar (D-MN) "Her lame apology, and that's what it was, it was lame, and she didn't mean a word of it, was just not appropriate. I think she should resign from Congress." pic.twitter.com/ZLFwDOttqa

Senate Minority Leader Chuck Schumer (D), who is Jewish, got in on the fun…

Rep. Omar’s use of an anti-Semitic stereotype was offensive and irresponsible.

This kind of intolerance has no place in Congress—or anywhere in American society.

No one should invoke anti-Semitic tropes during policy disagreements.

Enter Omar with the anti-Semitic sterotype:

omar, one of the devil women. An evil cretin that must disappear from the scene or there will eventually be another 9/11.

This thing should have worked to repair its own country instead of trying to destroy the country that accepted her. The thing has to completely disappear from America……now or it will do even more damage that obama did.

But wasn’t it obama that brought so many of these American-hating people to Our country? Now it’s completely understandable why the Jewish citizens would be disturbed by the muslims working to destroy the Jews (and then all Americans along with all non-muslims) but cannot understand why so many Jewish people continue to vote for democrats?