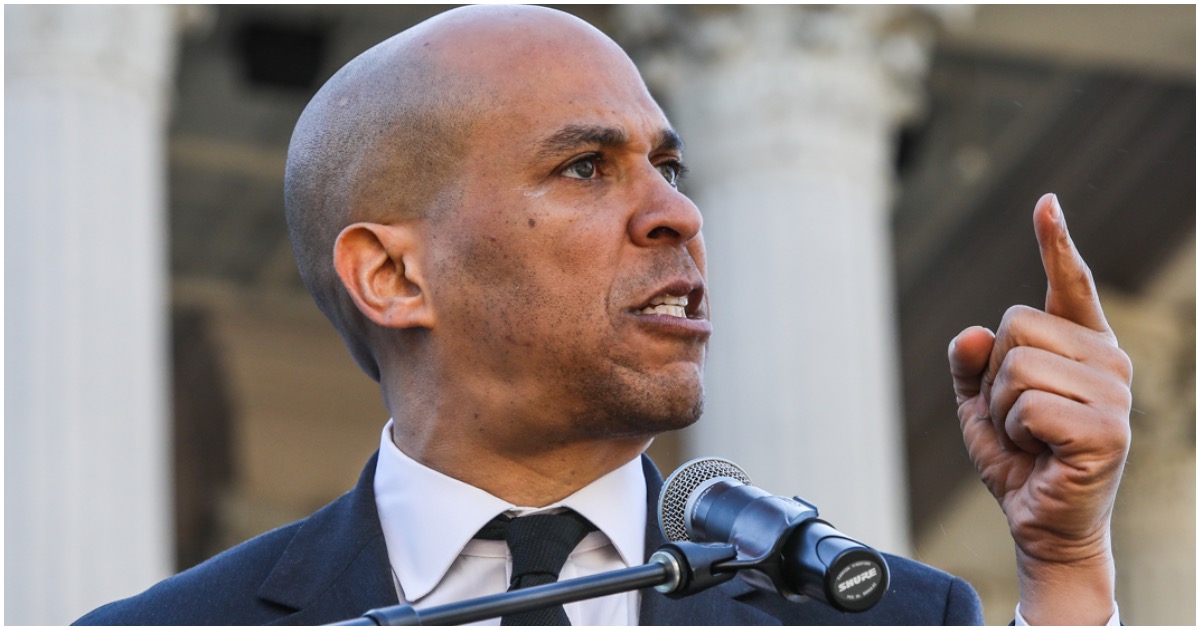 The following article, 2020 Dem Cory Booker Made It Clear: ‘If I Had the Power’ to Ban Guns ‘I Would’ (WATCH), was first published on Flag And Cross.

The New Jersey Democrat Senator can’t seem to catch in a break in the polls, which has to make you wonder why he even made a bid to begin with.

Back in 2000, Cory said something very interesting about guns.

Either he’s never heard of the Second Amendment, doesn’t care, or doesn’t care about the United States Constitution.

All of those things can be simultaneously true.

The 2020 Democratic presidential candidate made the comments during a July 2000 appearance on CSPAN’s “Washington Journal.” At the time, he was a member of the Newark, New Jersey Municipal Council.

When asked if he would “ban guns,” Booker replied: “I am very much one that is against handguns. And I know, in my urban environment, I see little to no need for guns at all, and I think that the availability of guns and the ease with which even young people can get their hands on them is just horrendous, and I would, if I had the power to do so, I would. In fact, we’re even looking towards making, doing some local level handgun legislation. I’m going to take every step I can to get guns of the hands of those who commit crimes or those who might commit crimes.”

The Dem nomination will most likely go to Bernie or former Vice President Joe Biden. It’s really that simple.

During a town hall on Fox News (for some reason), Bernie was asked about his taxes – considering he recently admitted he was a millionaire.

Sanders wasn’t too pleased with the question.

Fox News host Bret Baier first pressed Sanders on the issue, to which Sanders responded: “Pfft…come on…I am, I paid the taxes that I owe…why don’t you get Donald Trump up here and ask him how much he pays in taxes.”

Sanders: “Pfft…come on…I am, I paid the taxes that I owe…why don’t you get Donald Trump up here and ask him how much he pays in taxes” pic.twitter.com/MNAVs3TOnv

A few moments later, Fox News host Martha MacCallum pressed Sanders again on the issue, asking: “So would you be willing to pay 52% on the money that you made? You can volunteer, you can send it back.”

Bernie responded, “You can volunteer too. Martha, why don’t you give? You make more money than I do.”

MacCallum: “So would you be willing to pay 52% on the money that you made? You can volunteer, you can send it back”

Bernie: “You can volunteer too…why don’t you give? You make more money than I do”

Baier: “And she’s not running for POTUS” pic.twitter.com/zn4XrzJIXG

The left is losing their minds because Trump had the gall to suggest he will consider placing migrants in cities where illegal aliens are already welcomed.

And yet, Dems seem to hate the idea – which only serves to show how hypocritical they are being on the issue.

It begs the question: why do Dems feel some migrants should be better protected from ICE than others?

This idiot never herd of the first Constitutional amendment! “A well regulated Militia, being necessary to the security of a free State, the right of the people to keep and bear Arms, shall not be infringed.

He is the “Infringed”

Sparta-Coon-Hood-Baboon better Walk The Talk and Prohibit his Body Guards from carrying weapons…! He better get rid of his personal fire-arms too….! He will never do it….! He better stop asking citizens to give their weapons up….!

Booker you would never be able to take our guns! The Constitution gives us that right! And you don’t have to look further than Venezuela to see what happens when we let the government take away that right!