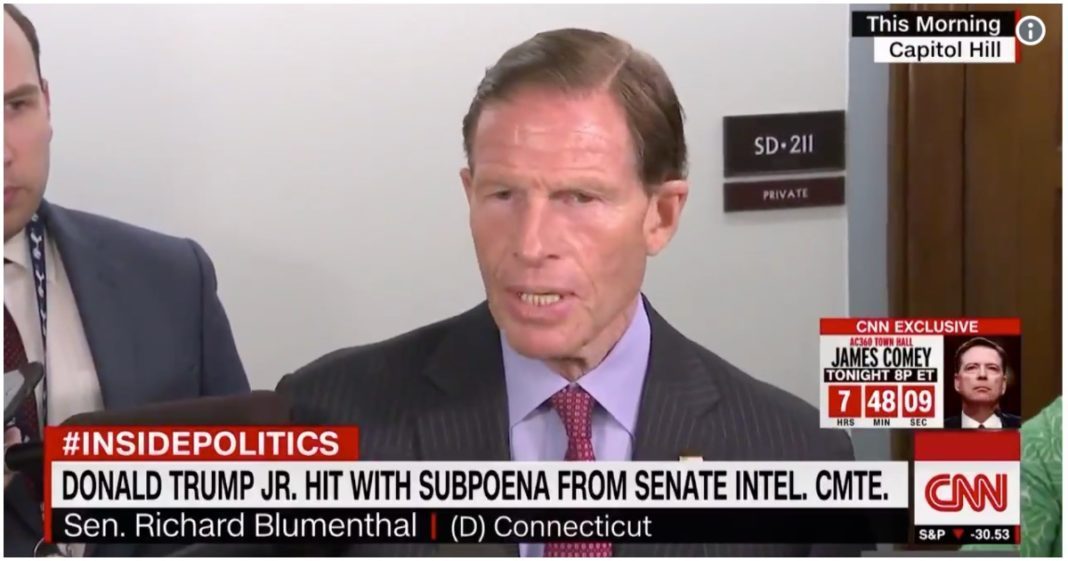 The following article, WATCH: Top Dem Now Says Trump Jr. Should Be JAILED If He Refuses to Comply With Subpoena, was first published on Flag And Cross.

It has been rumored for a while.

On Wednesday, Democrats made it a reality.

Donald Trump Jr. has been suspended for an issue relating to Russia.

Dick said, “If he fails to answer he ought to be put in jail. If he fails to comply with a lawful subpoena – he has no privilege – prison is the only answer.”

Democratic Sen. Richard Blumenthal says if Donald Trump Jr. fails to comply to a subpoena from the GOP-led Senate Intelligence Committee he should be "put in jail": "He has no privilege, prison is the only answer" https://t.co/wRHSMOzcwT pic.twitter.com/A4wD0IfaId

Subpoena for Donald Trump Jr. is the right step, as I’ve urged, to explain his apparent lies in his Judiciary Committee appearance. He told us he was only “peripherally aware” of Moscow Trump Tower talks, when actually he was in the thick of it. His demeanor gave him away.

Subpoena for Donald Trump Jr. is the right step, as I’ve urged, to explain his apparent lies in his Judiciary Committee appearance. He told us he was only “peripherally aware” of Moscow Trump Tower talks, when actually he was in the thick of it. His demeanor gave him away. https://t.co/8DB4zmLkKx

The Hill reports that Jr. is unlikely to comply:

President Trump’s eldest son, Donald Trump Jr., is reportedly unlikely to comply with a subpoena from the Senate Intelligence Committee for his testimony about his communication with Russian officials.

If Trump Jr. is seriously considering a run for office someday, New York might not be the best place for him.

That being said, Trump Jr., who is dating former Fox News personality Kim Guilfoyle, says he is not ruling out politics in his future.

Anyone see that coming?

Appearing Wednesday evening on Bloomberg Radio, Donald Trump Jr. said he isn’t ruling out following in his father’s footsteps with a future run for office.

Trump Jr. noted, “If I can be helpful and I can be a powerful voice for that… that’s my primary focus. As for the future, I never want to rule it out. I definitely enjoy the fight. I definitely like being out there and I love being able to see the impact and the difference that it makes on these people’s lives that I get to see all over the country.”

Trump Jr. has emerged as a fan favorite among the president’s base, assuming the role as the administrations’ unofficial spokesperson, while vigorously defending his father against daily attacks from the establishment media. During the 2018 midterm election, he proved to be a fundraising juggernaut for Republican candidates, helping Sen. Ted Cruz (R-TX) alone rake in nearly $500,000, according to Politico.

Back in October 2018, CNN’s Jim Acosta took to Twitter to bash President Trump’s rhetoric as the reason why multiple Democrats were targeted by “mail bomber” Caesar Sayoc.

Acosta isn’t the only one blaming Trump, but it would seem as if the left looks the other way when Republicans are the targets of such attacks.

Trump talked about the bombs sent to former public officials at his rally in Wisconsin. But once again he didn’t mention CNN. On top of all that he criticized the “media” for coverage he doesn’t like. And, of course, he took no responsibility for his own rhetoric.

Jim’s tweet didn’t sit well with Trump Jr., who was a victim of a deranged radical earlier in the year:

Jim, did you or your colleagues take any responsibility for your rhetoric in constantly calling my family Racists and Nazis for 2 years when my wife actually opened an exploding envelope of white powder intended for me? What about when it happend to my brother? https://t.co/TpMTk17x9W

Here’s what Trump Jr. is talking about, per Daily Wire:

Trump Jr. was referring to February 2018, when he and his family were allegedly targeted by someone who sent to their home an envelope containing white powder. Trump Jr.’s wife, Vanessa Trump, opened the envelope at the couple’s Manhattan apartment, then was taken to the hospital as a precaution, according to New York City police; two other people exposed to the powder were taken to New York Presbyterian-Weill Cornell Medical Center. A hazmat crew arrived and began decontamination procedures shortly after the incident; the powder was later found to be non-hazardous.

Following the incident, Donald Jr. fired off this tweet:

Thankful that Vanessa & my children are safe and unharmed after the incredibly scary situation that occurred this morning. Truly disgusting that certain individuals choose to express their opposing views with such disturbing behavior.

“The Socialist Party” didn’t seem to care that Jr. and his family were targeted:

Continue reading: WATCH: Top Dem Now Says Trump Jr. Should Be JAILED If He Refuses to Comply With Subpoena ...