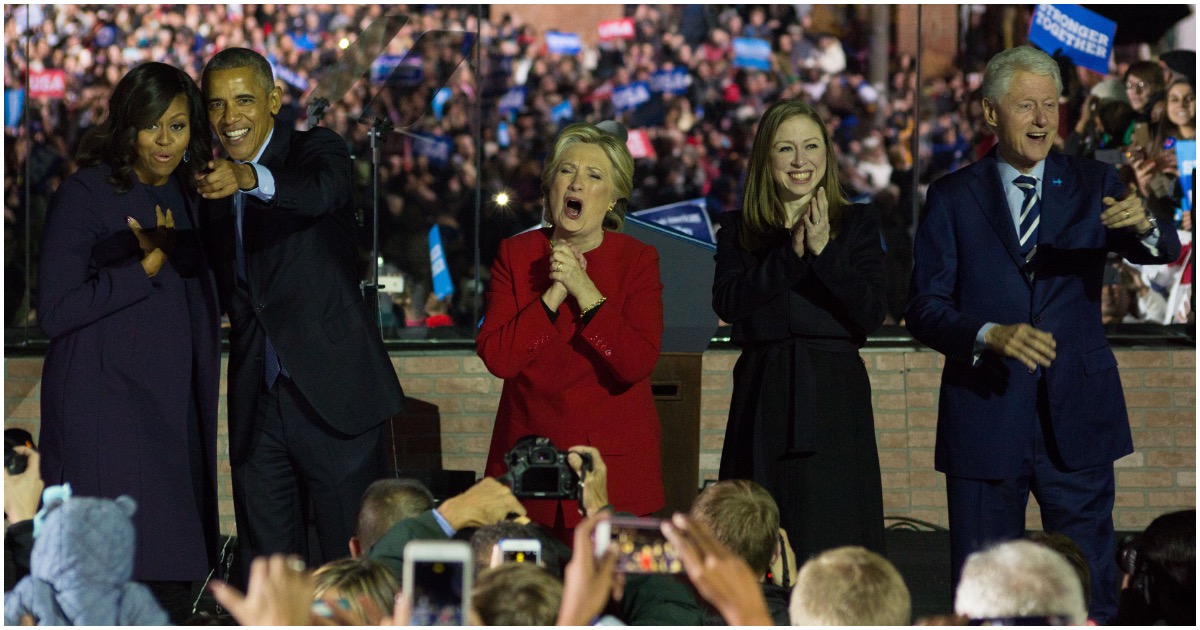 The following article, DETAILS: Hillary Can’t Stop Thinking About 2020, & Rumors Are Beginning to Gain Steam, was first published on Flag And Cross.

Former First Lady Hillary Clinton has not yet endorsed a 2020 presidential candidate. It’s still early in the process, so maybe that’s not a big deal.

With as relevant as Clinton has remained since her loss to Donald Trump in 2016 – the speaking engagements, tours with husband Bill, showing up on random television programs – might Hillary be contemplating yet a third run for the White House?

She’s going on TV to renew her case, citing Mueller Report, that Putin helped Trump win, even suggesting votes were stolen from her in Florida

Her husband is starting a podcast

She's going on TV to renew her case, citing Mueller Report, that Putin helped Trump win, even suggesting votes were stolen from her in Florida

Her husband is starting a podcast

But on Saturday the Clintons stood before a crowd of their super fans, who’d pay for tickets to sit and listen to them talk. The room wasn’t quite sold out, but it did include more than one person who started cheering that Hillary should run again in 2020. “I think what everyone is hoping for is a nominee who will win both the popular vote and the Electoral College,” Hillary said, while declining to say anything specific about the field other than that “it’s really, really early in the process, and there’s so much that is yet to be revealed about each of the candidates. But we have so many very exciting, energetic candidates.” There was, however, a pointed mention later in the night about how much better she felt her own record on gun control was than that of her “primary opponent” in 2016—a reference to Bernie Sanders, who’s running again after having shifted on this issue, which was a major line of attack for Clinton in the last campaign.

After wandering through several other topics, from Bill’s funding of programs in Africa to what to do about gun violence now, they kept making their way back to 2020. Americans know better now, they said. Journalists know better now, social-media companies know better now, Democrats know better now, they insisted, blending spotty optimism about the future with resentment over everything from former FBI Director Jim Comey to The New York Times. Looking up at a screen projecting the famous photo of Obama and Hillary and others watching the bin Laden raid, Bill described the call he got from Obama the next day, before the news went public.

Of course, nothing has been confirmed.

She basically said the 2020 Democrat candidate, whoever it winds up being, should openly ask for China’s help to defeat Trump.

The only thing that people would love to see is Hitlary climb back in her “coffin.”

After watching the old corrupt woman stumbling and falling around in 2016 and not appearing to have enough energy to continue it’s difficult her trying to re-do four years later. Put her along with other two dozen democrats all thinking they “should” be president and there isn’t a viable candidate among them.