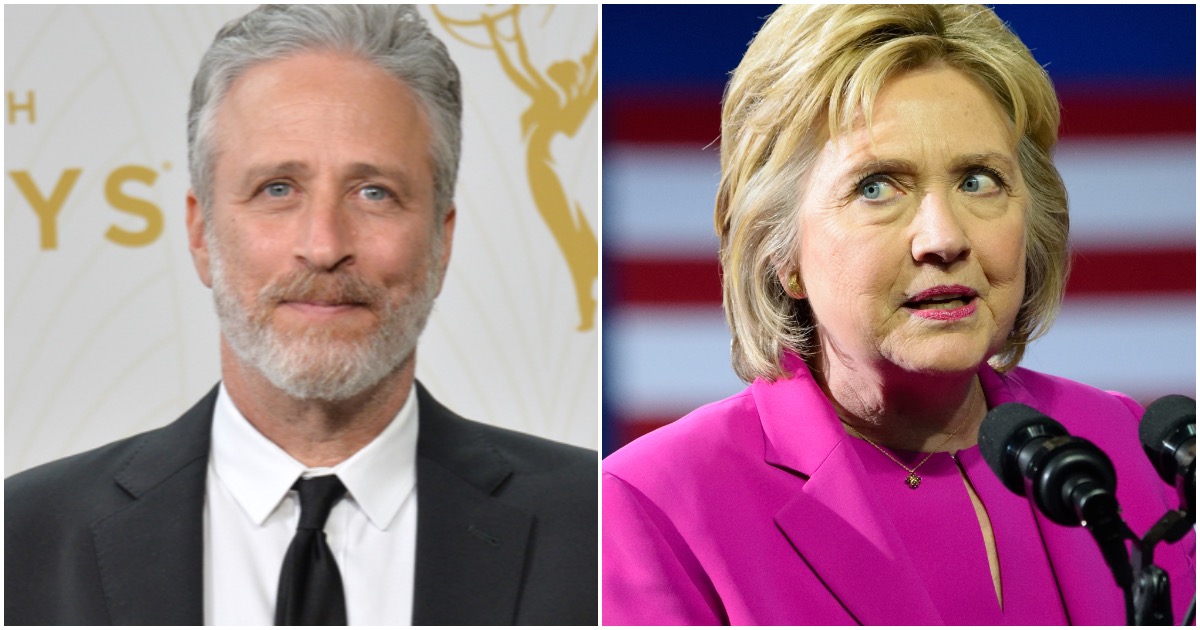 The following article, Dems Have HILARIOUS New Excuse for Why Hillary Lost, & It’s ALL Because Of Jon Stewart, was first published on Flag And Cross.

For some odd reason, comedian Jon Stewart’s Comedy Central show was a ratings juggernaut for years.

Though it defies explanation, the politically uninformed would tune into the award-winning comedy show on a nightly basis.

However, “Daily Show” viewers may be heartbroken after learning that Stewart was actually the reason Hillary Clinton lost the presidential election to Donald Trump in 2016.

In the middle of last week, Huma Abedin must have bustled over to Hillary’s place with a lovingly bound copy of the latest in cutting-edge academic research, a report that says Jon Stewart’s retirement is ACKSHULLY the reason Donald Trump won. We’ll all be able to hear more about this in Frau Pantsuit’s next memoir, “7,573 Other Reasons I Lost That Totally Were Not My Fault, You Ungrateful Pissants.”

The latest in cutting-edge political science/flat-earth theory is that after Stewart quit hosting a comedy show for liberals, the advantage swung to Trump because Democrats forgot there was an election or something.

Proving that the nation’s professoriate is even more obtuse than you would have suspected, Ethan Porter of George Washington University and Thomas J. Wood of Ohio State University note that when Stewart departed “The Daily Show,” ratings sank. “The transition at ‘The Daily Show’ spurred a 1.1% increase in Trump’s county-level vote share,” they claim in their paper, “Did Jon Stewart Elect Donald Trump? Evidence From Television Ratings Data” published in the journal Electoral Studies.

How great is that?

Did you tune in?

Just kidding. I know you didn’t.

Continue reading: Dems Have HILARIOUS New Excuse for Why Hillary Lost, & It’s ALL Because Of Jon Stewart ...

Add up all the people and reasons that old corrupt hillary lost that election and she should be able to understand that there was plenty of reason and no hope for the old woman to lose. Meanwhile would think that these tv stations willing to give her air time must be rather hard up.