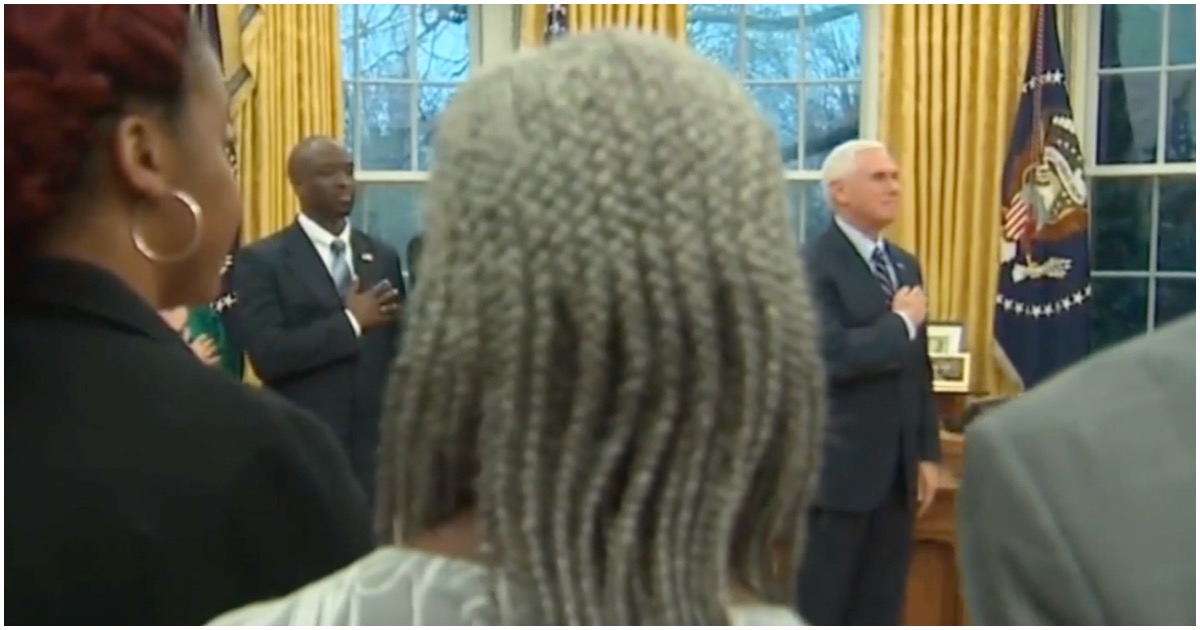 The following article, FLASHBACK: Reporters Disrespect America, Do the Unthinkable During National Anthem (Watch), was first published on Flag And Cross.

Before telling America he would compromise with Democrats to end the partial government shutdown, President Trump participated in a naturalization ceremony in the Oval Office.

No doubt a special moment for the new Americans.

No doubt a special moment for Trump, as well.

Trump said: “By taking this oath, you have forged a sacred bond with this nation,” and welcomed them to America

The pledge of allegaince was quickly followed by the national anthem.

What were a couple of reporters caught doing?

Focus on the left side of the screen…

Did you catch it?

You can clearly see at least two reporters typing away on their phones.

Compromise means something to most people. To Democrats, it literally means nothing.

The current Democratic position on shutdown is “no compromise” & @POTUS unconditional surrender on border security.

What happened to all the lectures from commentators about the need to compromise?

I guess for them “compromise” means when 3 or 4 Reps vote with the Dems.

Rubio on the border:

As long as desperate people believe that they are going to be able to cross our border many are going to go on the dangerous journey from Central America trafficked by some of the most dangerous people on earth. From that standpoint alone it’s a crisis: https://t.co/6YaRPgAzWd

President Trump is adamant that he wins in all scenarios, especially when it involves a promise he made to the people who put him in office.

As far as the border wall goes, it appears Democrats are beginning to show signs of giving in to the president’s wishes.

Some Democratic lawmakers are beginning to crack on their opposition to the wall.

Sen. Jeff Merkley (D-OR): “Some fencing has uses. Some barriers are useful.”

Rep. Cheri Bustos (D-IL): “If we have a partial wall, if we have fencing, if we have technology used to keep our border safe, all of that is fine.”

Rep. John Sarbanes (D-MD): “Certain physical barriers can make sense along the border, and a lot of places you already have that.”

Rep. Katherine Clark (D-MA): “I think there are parts of the border that would benefit from repairing fencing and other barricades that already exist there.”

Thank you Schumer and Pelosi for that rebuttal. pic.twitter.com/gkEnPYhZ2e

Yikes. I like Chuck Schumer and Nancy Pelosi but they gotta work on the whole “not looking like villains from the next bond movie” thing next time. pic.twitter.com/Uen5rgZLH9

Coudn't someone on the Pelosi / Schumer team mention it's a bad idea to keep a crazy eye though their statement? pic.twitter.com/KND4pNOiVo

If you imagine both Schumer and Pelosi with mermaid tails it makes everything better.

Did you miss Chuck Schumer and Nancy Pelosi’s response to Trump’s #PresidentialAddress?

Straight out of a horror movie… pic.twitter.com/KBvBppxnhf

“We can re-open the government and continue to work through disagreements about policy,” Schumer said. “We can secure our border without an expensive, ineffective wall. And, we can welcome legal immigrants and refugees without compromising safety and security. The symbol of America should be the Statue of Liberty, not a thirty-foot wall.”

In a tense meeting with Homeland Security Secretary Kirstjen Nielsen about the U.S.-Mexico border — in which Nielsen was spieling out a slew of facts (the non-fungible kind) — Pelosi interrupted to declare: “I reject your facts.”

“The clash between the top House Democrat and a key member of President Trump’s Cabinet occurred during a Wednesday meeting in the White House amid the impasse over the government shutdown, with Trump standing firm and demanding $5 billion for the border wall,” Fox News reported.

I am disappointed that Dems did not want to hear from @DHSgov about the security & humanitarian crisis we are facing at the border. They didn’t want to hear about criminal aliens, drug smugglers, smuggled & abused children or violent caravans trying to breach the border wall.