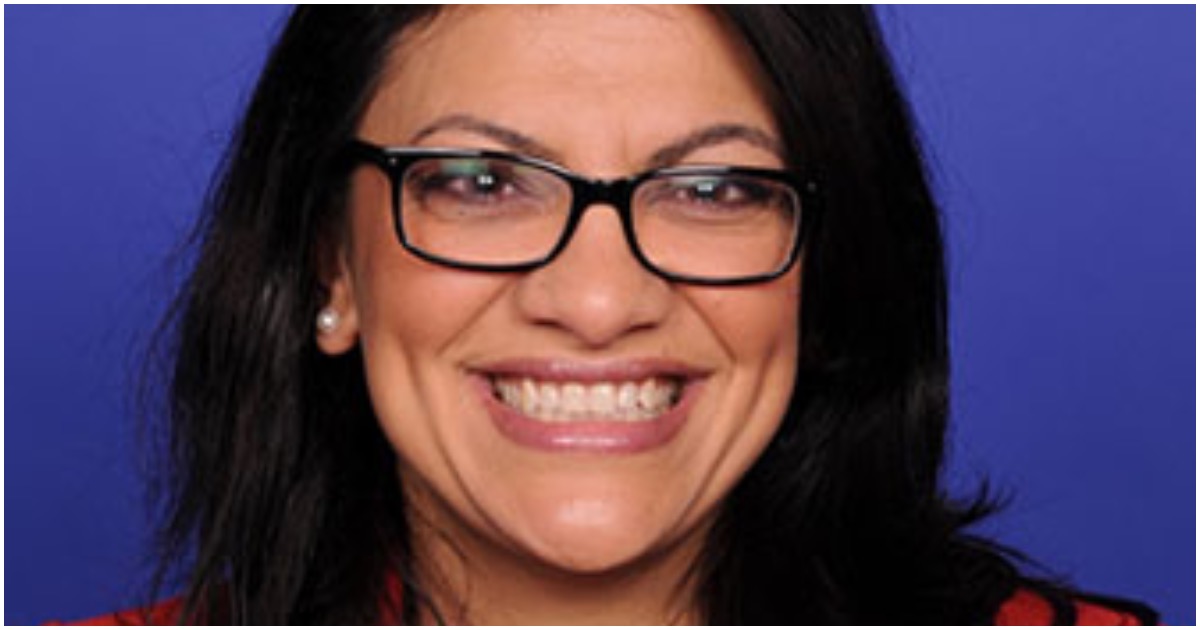 The following article, Rashida Tlaib Calls for Audience to Go On HUNGER STRIKE to ‘Shut Down ICE’ [Watch], was first published on Flag And Cross.

Democrat Rep. Rashida Tlaib keeps getting so much attention because she keeps saying silly things.

If she’s not wearing the Palestinian flag she introducing articles of impeachment against Trump.

If she’s not caught on video saying “impeach that motherf*****” Trump she’s claiming all members of her party or racist.

It’s kind of never-ending with this one.

Now, Tlaib is saying she’ll go on a hunger strike in order to get ICE to “shut down.” Oh, and she wants her fans to follow her lead.

Rep. Rashida Tlaib (D., Mich.) urged her supporters to join her in a hunger strike to push for action to “shut down” U.S. Immigration and Customs Enforcement (ICE), arguing the radical push to abolish ICE can’t be achieved by Congress.

Tlaib, headlining a Detroit fundraiser this past weekend for the Michigan Coalition for Human Rights, complained of colleagues who are constantly “policing” what she says and lack willingness to embrace bold stands such as abolishing ICE. She called on her activist audience to join her in a hunger strike at the border.

Tlaib noted, “It’s going to take movements outside the halls of Congress.”

Concluding, “I know what they’re going to say, they’ll go, ‘What do you mean Rashida?’ Well I’ll tell you. There are some people that are using hunger strike, all these other things, going to the border, and I plan to.”

President Trump is planning to take drastic measures to curb illegal immigration at the southern border.

He is now considering an official “immigration czar.”

The Trump administration is considering bringing on a “border” or “immigration czar” to coordinate the president’s immigration policies across various federal agencies, according to three people familiar with the discussions.

President Donald Trump is weighing two potential candidates for the post: Former Kansas Secretary of State Kris Kobach and former Virginia Attorney General Ken Cuccinelli — two far-right conservatives with strong views on immigration, according to the people, who spoke to The Associated Press on condition of anonymity because they were not authorized to discuss the conversations publicly.

POTUS warned in early April that he may shut down the southern border entirely.

Without actually saying how will Mexico respond to it, Sánchez Cordero warned today about the “mother of all caravans” forming in Honduras https://t.co/GzzZZLWbHp

•”We cant have hundreds of thousands of migrants transiting through MX reaching the Northern border (with/US)”pic.twitter.com/iARXP1JNqw

@M_OlgaSCordero announces that MX will no longer give large numbers of humanitarian visas to migrants crossing through the country. Says MX will continue to give worker / tourist visas that keep migrants in southern Mexico and enforce migratory laws for those traveling north. https://t.co/lZRlKxBt7i

This is one Jew hating racist fat pig , Jihadi Jane- Tlaib, whom I wouldn’t mind seeing her go on a hunger strike that would lead to her ‘demise’… I’m good with that. I m fed up with her Islamic agenda and her support of Islamic terrorists….. She needs to consider going to live in the Middle East where her views and hatred of Jews is more acceptable among her Jew hating friends.