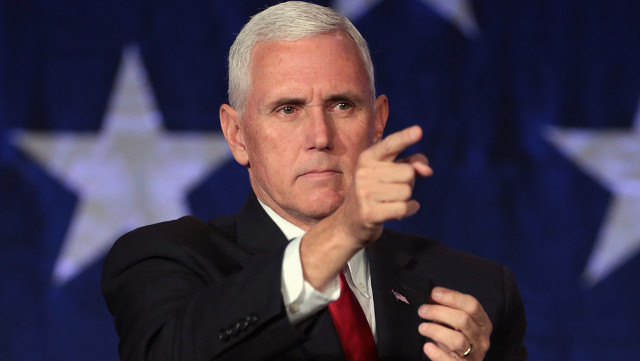 The following article, VP Pence SLAMMED by Christian School Students in Scathing Petition, was first published on Flag And Cross.

Vice President Mike Pence’s Christian faith has been the subject of a great many tirades as of late, and that doesn’t look to be changing anytime soon.

As the 2020 election approaches, the crowded democratic field of candidates are busy taking pot shots at the President and his administration.  Pete Buttigieg, who worked for years with Vice President Mike Pence in Indiana, recently stirred up some media coverage for himself by blasting the “Mike Pence’s of the world” for their views on homosexuality.

Now, as the Vice President was preparing to speak at a Christian university commencement in May, there has been pushback from the student population regarding Pence’s connection to The White House.

Vice President Mike Pence is getting pushback from Taylor University students and alumni after the small evangelical Christian school tapped the former Indiana governor to be this year’s commencement speaker.

Over 3,300 people have signed a change.org petition to get Pence’s invitation to the mid-May commencement ceremony rescinded, claiming the “Trump-Pence Administration’s policies” are “not consistent with the Christian ethic of love we hold dear.”

One Taylor grad said the school, “should be ashamed…I am physically shaking…I feel personally attacked,” but not all alumni agree and Taylor officials said they are standing by their decision.

The Vice President’s wife was embroiled in a similar controversy just months ago, after she accepted a job at a Christian school whose policies toward homosexuality have long been considered controversial.

another false church of man using the name christian . They like all the churches of apostate man using the name of the Lord in vain as they always do, leading people to them and their false doctrines instead of the the Lord Jesus Christ and the doctrine of Christ. They are doing their job tho serving satan and drawing those that believe them into the lake of fire where hell, satan and all the unrighteous end at judgment , the lake of fire for destruction. Ignore them they are of satan’s spoil not of the Lord of this age… Read more »

What kind of teachers does this a Christian school have? Socialists and communists, know wonder our kids r turning out the way they r, where r their parents to straighten things like this our. They are going to hell in a hand cart. This Country needs help if this is what the a Christians have!!!

More students and leftists who want to edit the Bible. Good luck with that.

Guest
Why Choose A Homosexual Speaker for a Christian Co

If you are really a Christian School? Then I strongly Suggest you go red your Bible. And may I also Suggest you Change your Guest Speaker? Their are plenty of God-Fearing People to choose from. No need to choose a homosexual speaker? Why would you go out of your way to choose someone who has such a in-your-face homosexual relationship? When you could choose from so many worthy Guest Speakers without all the Sexual Content? These are kids? So, why not tone it down a notch?