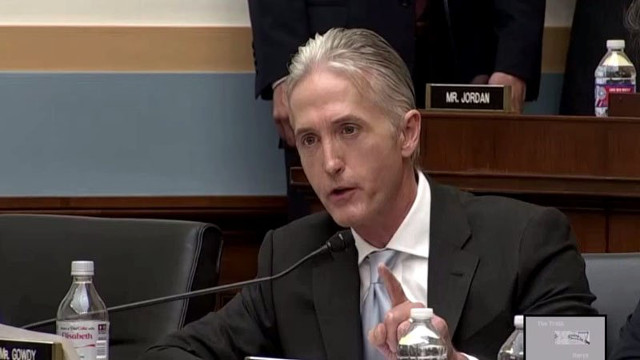 The following article, Trey Gowdy Weighs in on Mueller Report, Offers Fresh Thoughts on ‘Obstruction’, was first published on Flag And Cross.

The nation today still waits, hoping for even the slightest glimpse of what was discovered during the 22 months that Robert Mueller was investigating “Russian collusion”.

The political world is split on what we may find within the report’s pages.  Some believe that further vindication awaits President Trump, possibly in the form of evidence that the Barack Obama administration truly was responsible for a number of espionage schemes aimed at Trump’s 2016 campaign.

On the left, however, they are still clinging to the hope that Mueller will somehow have nullified the results of the 2016 election altogether, thus validating the existence of “the resistance”.

One of the most concerning questions from the brief summary of the report provided by Attorney General Bill Barr has to do with the peculator choice by Mueller to make no determination on the charge of obstruction of justice.

Now, Congressman Trey Gowdy thinks he may know why.

“There is some unsettled law on exactly what a president can do. I mean, a president could pardon you today, Bill, before you were ever charged,” Gowdy told Hemmer.

“I think it’s an open-ended question — can a president obstruct an investigation? Surely if you spoliate evidence, if you encourage witnesses to lie, of course, that’s obstruction of justice.

“So, I think what Mueller was saying is we don’t know the department’s position on whether the president can obstruct justice or not. That’s for you to decide, we’re going to punt it to you.

“Not just the factual interpretation, but legally, can a president be indicted for obstruction of justice when he or she is the head of the executive branch? That’s how I interpreted that.”

Gowdy seems to be insinuating that the legal precedent for charging the President with obstruction may not exist, and may not ever exist, depending on who is interpreting the concept of executive privilege.

If Gowdy is right, then the DOJ’s lack of determination will only lead to further unrest in the United States, where speculation over the impact of the Mueller report has already been running rampant.