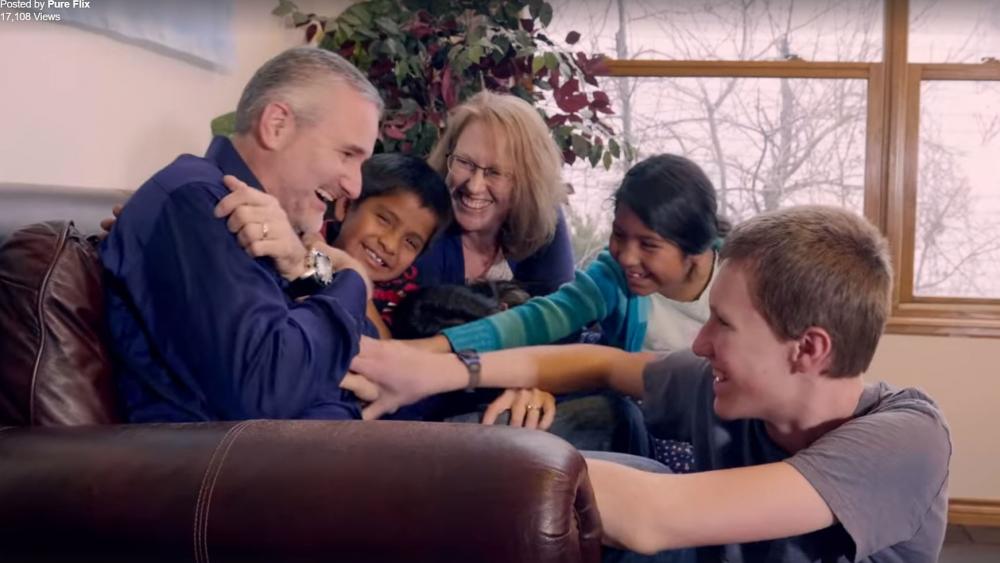 Adoption is an incredible, God-mirroring feat for Christian families to undertake, but it’s not without its challenges and pitfalls. When God has something in store for your life, however, you can’t run from it for long.

Jeffrey and Kristine Moore learned this lesson on their 10-year adoption journey, ultimately leading them to adopt four children, Elizabeth, Jhonatan, Mariaelena, and Talia, from Peru.

Jeffrey, however, recalled in an interview with PureFlix Insider that he wanted nothing to do with adoption in the early days of their marriage—even after suffering two miscarriages.

Soon after, God lovingly set Jeffrey straight with an incredible vision that he reveals in the video below:

“The story of adoption began because God called us to it. I had a vision, and it was really, really powerful,” he said. “I was floating in the ocean at night. It was very calm and peaceful, and I was being carried by something in the water, like a current pushing me toward something.”

Jeffrey remembered the water in his vision becoming shallow and leading him to a beach on a tropical island. It’s there that he saw something breathtaking.

“There were all of these jewels or gemstones that were lying around in the sand, and every one of them was glowing with this internal fire,” he continued. “All these points of light…and I just felt compelled to reach out and pick one up.”

His vision ends there, but Jeffrey says he believes God was giving him a very clear message about international adoption: “‘He said, ‘My son, are you willing to be carried by my spirit to a land far away to pick up the jewels that no one else even knows about?’”

Finally equipped with the certainty that they were answering God’s call, the Moores sought help from Adopt Together, a crowdfunding site that helps families raise money toward the sometimes immense expenses incurred in the adoption process.

Kristine says she and her husband knew in their hearts that they were called to adopt more than just one child, so they began the process knowing that the cost would be exponentially greater.

As they continued with the process of adoption, the Moores experienced a life-shattering test: Jeffrey’s lengthy career as a petroleum geologist came to an abrupt end when he lost his job in 2015.

Working to put together the pieces, the Moores asked themselves, “what does this mean for the adoption?” Thankfully, God blessed them with incredible hope and perseverance, and they continued to trust him through the storm.

That unshakable faith eventually led them to Peru in 2017, where Jeffrey, Kristine, and their biological son, Joshua, met the four new members of their family: Elizabeth, Jhonatan, Mariaelena, and Talia.

Now, in 2019, the whole Moore family is praising God for his blessings and providence. They say the four siblings, who were the only children in Peru adopted by an American family in 2017, have adjusted beautifully to life in the States.

“Our kids have been phenomenal,” Kristine said, though she noted that, of course, the “growing pains” of suddenly going from a family of three to a family of seven take a long time to overcome.

Still, God brought these precious children into the Moore family, and raising them up for his glory is such an incredible reward, Kristine declared: “If anyone says, ‘What’s the greatest joy, it is seeing the kids love Jesus.”

The post This Husband Didn’t Want To Adopt, Then God Gave Him An Incredible Vision appeared first on Flag And Cross.