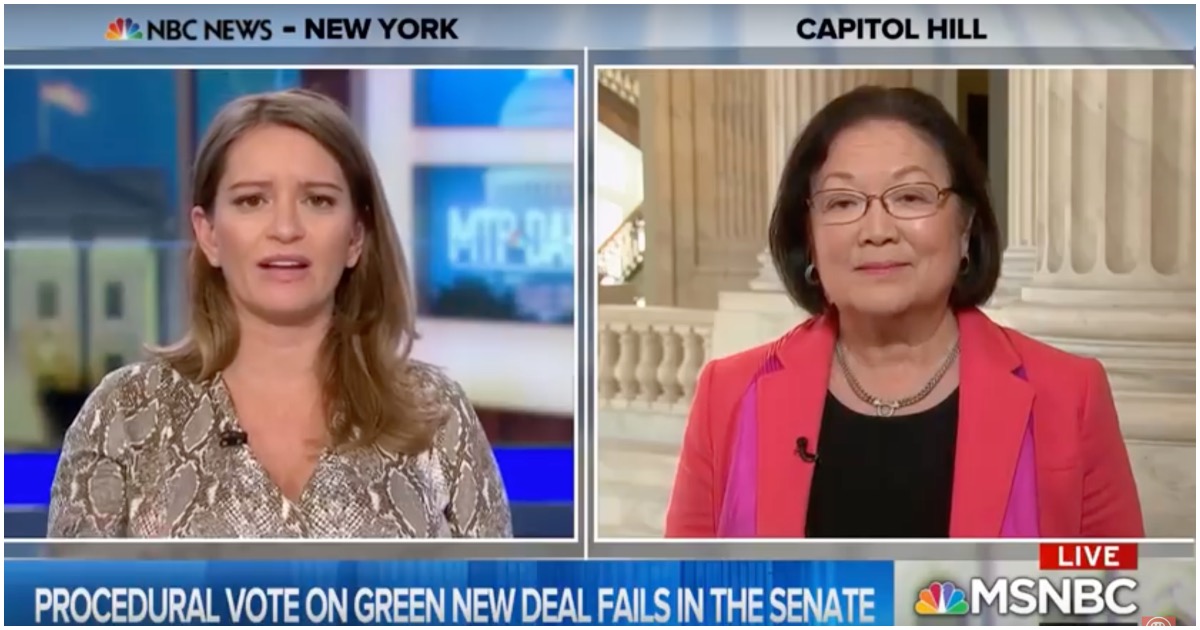 What Tur highlights is that Hirono and her ilk are “trying to appear to support the bill without having to suffer for it politically.”

Tur noted, “But isn’t that an argument that you just made to vote ‘yes’ for it. I mean McConnell may be trying to make it a show vote… You’ve signed onto this, you’re one of the co-authors of it. If you believe that this is something – even if it’s aspirational – that needs to get done, why not take a stand and vote YES for it, [saying] ‘here’s where the Democrats stand on it’ and ‘we don’t don’t care that it’s a show vote from Leader McConnell.’

She added, “It seems like you’re trying to have it both ways – not be hung by it politically but also NOT say that you don’t support it.”

With Tur calling out Hirono and some Dems in the media admitting President Trump was vindicated witth the release of the Mueller report, might the MSM finally begin to give Republicans a chance?

Did you laugh at that last sentence?

Ocasio-Cortez is not ready to stop talking about her “Green New Deal” project, despite backlash from members of her own party.

She intends to push forward, regardless of what the American people want.

To get back at the “haters,” AOC sent a tweet using a picture from the children’s show SpongeBob SquarePants.

The picture shows a home belonging to a character in the show named Sandy Cheeks, who is a squirrel that lives in an air-filled glass enclosure.

Ocasio-Cortez didn’t specify what her point was, but it appears she was arguing that climate change will lead to rising sea levels.

He appeared on MSNBC to espouse a twisted version of democracy the left would absolutely love.

The post WATCH: MSNBC Host Slams Dem Senator for Wanting It Both Ways On ‘Green New Deal’ appeared first on Flag And Cross.

msnbc allowed this? What is the leftist democrat network coming to?

Without Air Travel …. Boats….Ships….& Tourism…..! Hawaii would shrivel up like a old mans p-nutts and fall off into the pacific because of the Crazy Eyed… Horse Toothed Loonz Green Deal and their Whacked On Flakka Loon Senator Hirono…!