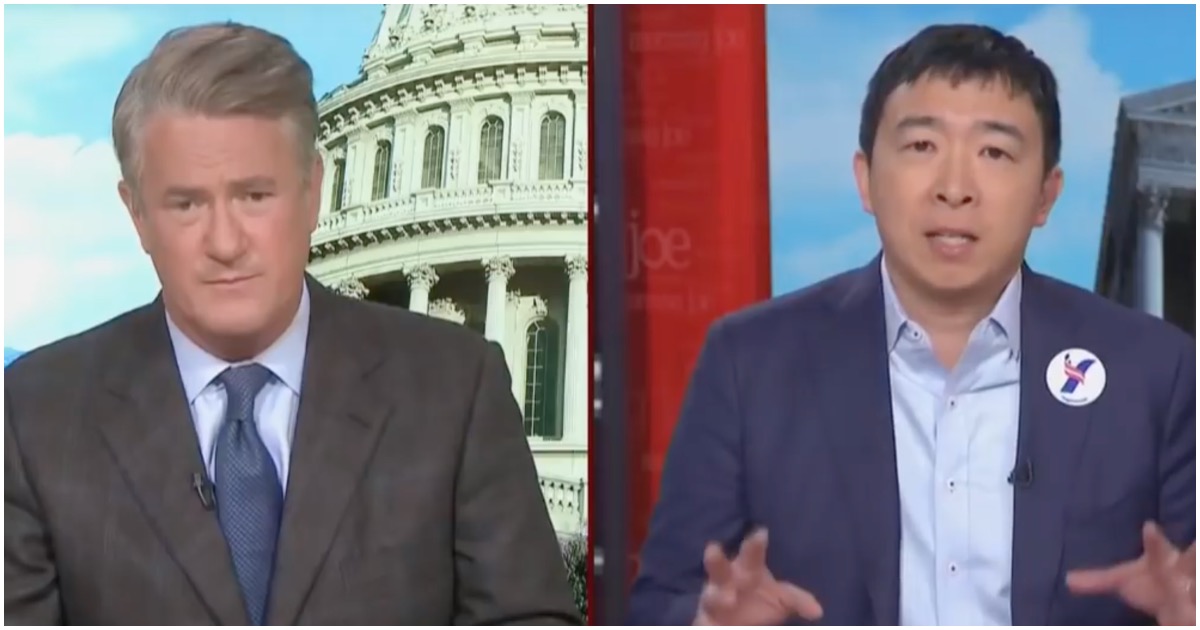 Yang wants to provide every American with $1,000 a month.

Scarborough: “I applaud that. What is the price tag, you’re a numbers guy. What’s the price tag of giving every American $1,000 a month?”

Scarborough: “Right. But I’m just — I’m curious because I actually entered politics because I was concerned about the national debt. Do you know actually what the price tag would be paying every American $1,000 a month?”

Yang: “It’s $1.8 trillion past current expenses, but the way you get there, Joe, we all know this, how much did Amazon pay in taxes last year? Zero. Meanwhile, Amazon is sucking up $20 billion in business every year putting 30% of American malls out of business so what we need to do is pass the value added tax that would get the American people a slice of every Amazon transaction, every Google search, every robot truck mile.”

Of the many 2020 Democrat presidential candidates, Yang may very well be the least known – by a long shot.

If you have ever heard of the founder of Venture for America, a non-profit organization that seeks “to revitalize American cities and communities through entrepreneurship,” you’re ahead of the curve.

According to Yang, the next generation of white Americans will soon begin shooting up Asian churches.

Andrew Yang: White people will be shooting up Asian churches within a generation pic.twitter.com/sqEsOl55Ms

At the same time, Yang may have as good a chance to secure the Democrat nomination for president as The View‘s Joy Behar.

More on Yang, per Washington Examiner:

Democratic presidential hopeful Andrew Yang is finding a growing surge of online grassroots support for his longshot campaign in the form of memes.

The 44-year-old serial entrepreneur’s online supporters, known as the Yang Gang, have started meme pages on Reddit, Twitter, and 4chan, placing Yang’s image on popular meme templates. The profile of Yang memes exploded last month after his appearance on the “Joe Rogan Experience” podcast, which is a favorite show within the meme community.

Yang’s popularity is attributable in part to his universal basic income proposal, the centerpiece of his campaign, which entails giving every adult in the country $1,000 a month. The policy proposal is popular among a mostly white and male meme and gamer culture which shares Yang’s concern for jobs being lost to automation.

Presidential candidate @AndrewYangVFA is trying to save us from a robot dystopia. I think Arnold Schwarzenegger was meant to endorse this guy… or protect him.@Schwarzenegger #Terminator#Yang2020 pic.twitter.com/AzyVZgdnar

Can't wait to be getting these bad bois in the mail every month #HumanityFirst #Freedomdividend #Yang2020 pic.twitter.com/gMBc47oPFa

We did it!!!! THANK YOU everyone who supported us to make it happen!!!

The post REDISTRIBUTION: 2020 Dem Candidate Wants to Give All Americans $1,000 Monthly (Watch) appeared first on Flag And Cross.

Well, there won’t be any reason for anyone to work, just sit and collect the free money. Oh, wait a minute, if we are all going to get free money, who is going to provide the free money?

How many are already getting $1000 a month in the form of welfare, food stamps, fake SS disability payments, etc. Would there be a credit against that? He is living in a dream world and has no idea of the unintended consequences of this kind of proposal.