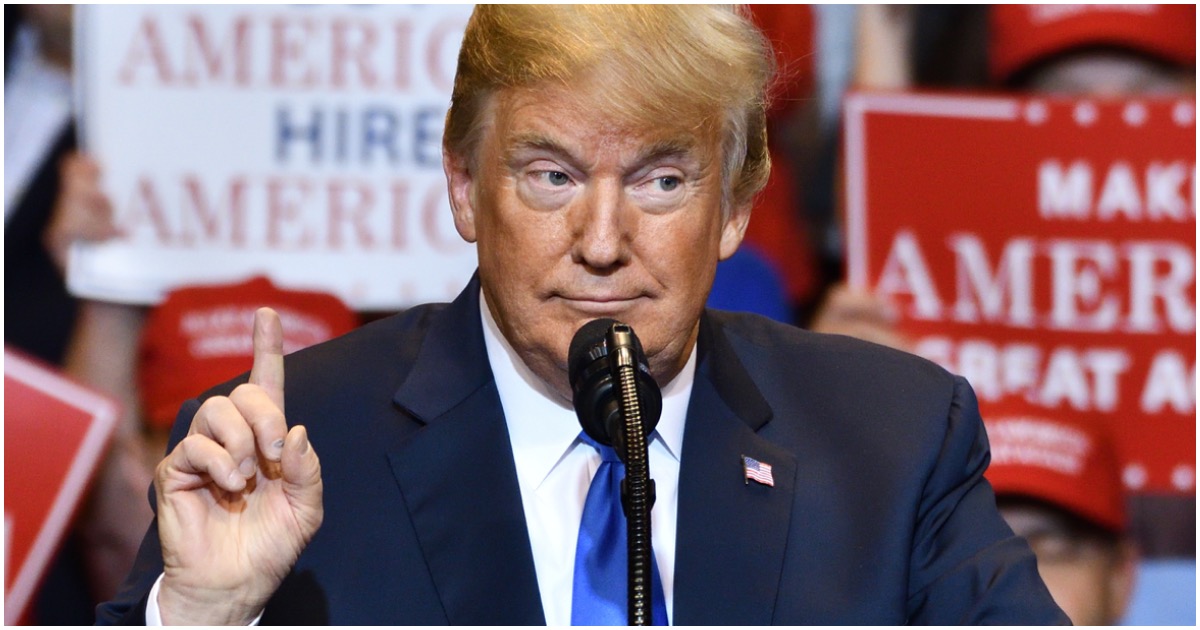 Trump, as you’d imagine, was not at all pleased.

The Senate voted 59-41 to pass the measure, declaring they would not support a “national emergency” declaration on the southern border should the president decide to send one to Congress.

Twelve Republicans sided with Senate Democrats to support the measure, including the predicted Sen. Rand Paul (R-KY), perpetual moderates Sen. Susan Collins (R-ME) and Sen. Lisa Murkowski (R-AK), pledged opposition Sen. Mitt Romney (R-UT), and Sen. Lamar Alexander (R-TN), who was the first to declare that he would vote against any effort on the part of the White House to pass the “national emergency” on separation of powers grounds.

Senate PASSES resolution to terminate President Trump's emergency declaration at the border, 59-41, sending it to Trump's desk for him to veto (as he has threatened to do).

Enter Trump with the only word he really needed to say:

Trump has to fight against his own party in a way Barack Obama never did. Democrats stick together while Republicans have minds of their own, for better or worse.

In this case, worse.

45 then elaborated a bit:

I look forward to VETOING the just passed Democrat inspired Resolution which would OPEN BORDERS while increasing Crime, Drugs, and Trafficking in our Country. I thank all of the Strong Republicans who voted to support Border Security and our desperately needed WALL!

I look forward to VETOING the just passed Democrat inspired Resolution which would OPEN BORDERS while increasing Crime, Drugs, and Trafficking in our Country. I thank all of the Strong Republicans who voted to support Border Security and our desperately needed WALL!

Border Patrol Chief Carla Provost has a few words for people who think there isn’t a crisis on the southern border with Mexico.

All she needed was three words to let everyone know that there’s no room for politics.

POLL: Should Jim Acosta Be BANNED FOR LIFE From The Press Pool?

U.S. Border Patrol Chief (@USBPChief) Carla Provost: “There is an ongoing debate about whether this constitutes a border security crisis or a humanitarian crisis. Let me be clear: it is both.”

U.S. Border Patrol Chief (@USBPChief) Carla Provost: "There is an ongoing debate about whether this constitutes a border security crisis or a humanitarian crisis. Let me be clear: it is both." pic.twitter.com/wdPxvGiCUI

How will lefties react to this? Kind of a big deal, isn’t it? Straight from the horse’s mouth.

There are some things you just don’t say. Most of those things are lies.

According to Jeff, the Trump administration is “deliberately” hurting migrant children because it’s “part of political strategy.”

“And so, this is — this system of locking children up behind the barbed wire…don’t call them anything other than child prisons or internment camps. That’s what’s going on here. And we’re told that there are children who have been here three, four, five, even six months long. And the trauma is being inflicted as part of a political strategy, to hurt children deliberately as part of a political strategy.”

A seven-year-old girl died at the southern border. She and her family were trying to sneak into the states.

The mainstream media has lambasted President Trump and his administration for her death.

Even Democrat Senator Chuck Schumer (NY) joined in, blaming border patrol agents for the death before the facts came out.

A 7-year-old girl should not be dying of dehydration and shock in Customs and Border Protection custody.

The MSM is not mentioning, though, that the girl hadn’t eaten or drank for days.

This is getting tiring. The clear implication here is that DHS did something wrong, but there is ZERO evidence of that so far. This is a real tragedy, but the little girl hadn’t eaten or drank anything for several days before she was taken into CBP custody. https://t.co/EQPzKP26oY

You can argue that her dad had legit reasons for taking her on the dangerous journey from Guatemala and having her cross the border illegally, but that doesn’t change that it’s clear the journey is what caused her death.

She was having seizures and had a 105 degree fever within a few hours of being in custody. She was taken into custody in a remote area. As soon as they got her to a border station w medical personnel, they got her medical treatment and airlifted her to a hospital.

You can either blame the father for taking her on this journey or blame no one, but it’s despicable that the media is going out of their way to blame CBP when there is 0 evidence they did anything other than their jobs and try to save her life.

I get it. The media has their narrative. They think the CBP are the bad guys for enforcing the law at the border and want every story to feed that message, but baselessly accusing them of being complicit in the death of a little girl is a new low for the media. https://t.co/4OD0TA6ElX

Of course. And that's why there already is one that has been started, as happens every time someone dies in their custody. However, it's clearly wrong for the media to imply they are responsible without evidence of wrongdoing, and there is none so far. https://t.co/eP4n403FJ4

What’s more is the girl’s father says border patrol could NOT have done a better job.

Talk about a narrative buster.

Guatemalan Consul Tekandi Paniagua tells CNN’s @edlavaCNN he met extensively with the father of 7-year-old Jakelin Caal Maquin Friday night in El Paso. Paniagua says the father of Jakelin has “no complaints about how Border Patrol agents treated him and his daughter.” 1/

2/ The consul says the father told him that agents did everything they possibly could to help the girl on the bus.

3/ The father, per the consul, confirmed the DHS timeline that Jakelin did not show any signs of distress until about 5am when they were placed on the bus to ride from the border checkpoint to the border patrol station 95 miles away.

The post Trump Only Needed ONE WORD After 12 Republicans Voted Against Border Emergency appeared first on Flag And Cross.