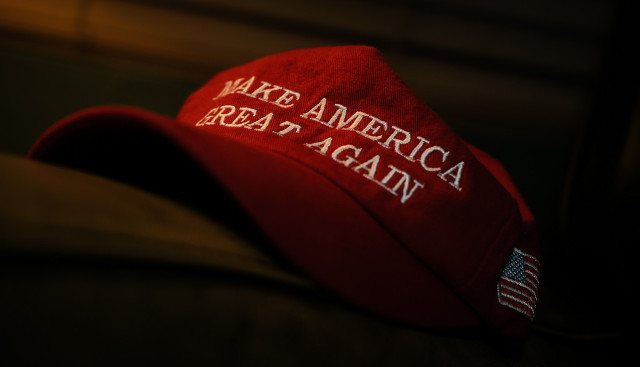 Prosecutors in Franklin Township, New Jersey, say that an 81-year-old man was attacked inside a supermarket because he was wearing a red “Make America Great Again” hat.

“The incident reportedly began after the victim was confronted about the red ‘Make America Great Again’ hat he was wearing,” Prosecutor Michael H. Robertson said.

The elderly victim, who has not been publicly named, refused medical treatment at the scene, police said.

Prosecutors did not offer any descriptions of the attacker nor note if the incident was caught on surveillance video.

Now, two days after the incident, a 19-year-old teen has been charged with the attack.

Police add that the surveillance video in the store shows the kid yelling at the old man and when the victim turned to walk away, that is when the kid attacked:

Salvagno then took the victim by the arm and threw him to the ground, tipping over the victim’s cart of groceries and ultimately throwing the hat to the side, authorities said.

The perp is now scheduled for arraignment on March 14.

Police have asked anyone with information to contact the Somerset County Prosecutor’s Office Major Crimes Unit at (908) 231-7100, the Franklin Township Police Department at (732) 873-5533, or can use the STOPit app.

The post Elderly New Jersey Man Attacked in Market for Wearing a MAGA Hat appeared first on Flag And Cross.

Awaiting when those leftist thugs attack the “wrong” person wearing his/her red hat. At that time there will likely be a dead thug. And I want to be on the jury if the victim is prosecuted and there will not be a guilty verdict.