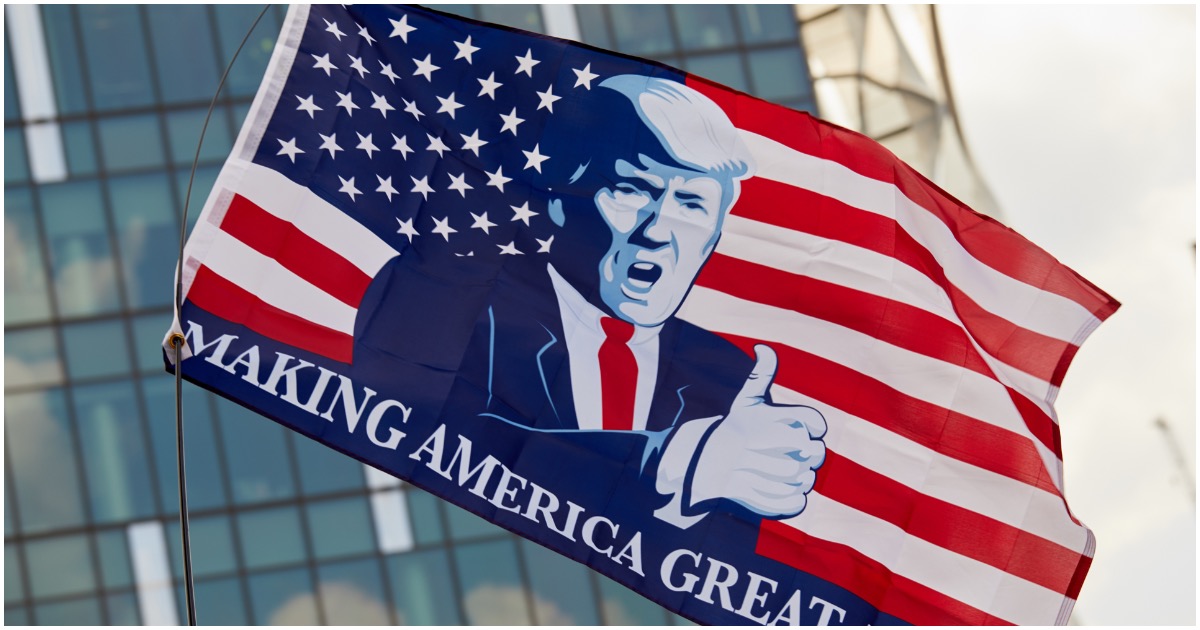 The Second Amendment is a crucial tenet to the American way of life. Without it, citizens are at the mercy of, well, damn near every negative potential scenario.

There’s a reason dictators strip their people of guns. It just makes it that much easier for governments and “supreme leaders” to have complete and utter control of all things.

You already knew that. There’s no re-inventing of the wheel going on here.

What’s awesome is that a NASCAR team has decided to partner with pro-Trump website Keep and Bear for two events to promote their America-loving ways.

The design of On Point Motorsports no. 30 truck proudly features the KeepAndBear.com logo, along with an-in-your-face effigy of President Trump as “The Punisher.”

Keep And Bear features some of the most lit pro-Trump apparel, gifts, toys, art prints, novelty, DVD’s, and books – along with coffee!

Click any of the KAB links above to head straight to the site and start scooping up all the best items to show that you’re a proud American.

One has to imagine this move by On Point Motorsports will tick off every liberal in the nation.

Check out the design of the Toyota truck… 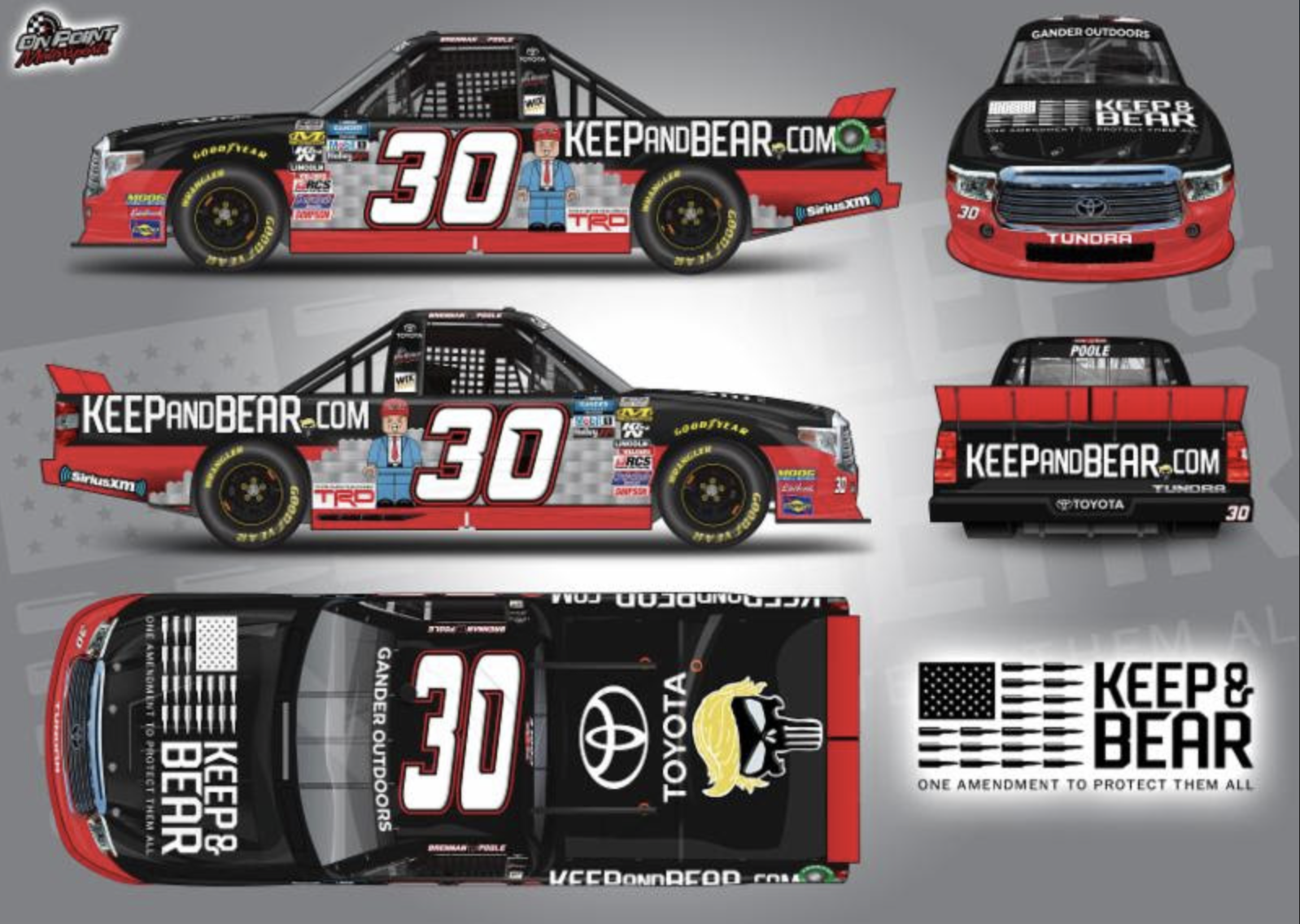 Here’s the official press release from On Point Motorsports:

On Point Motorsports Announces a Two Race Sponsorship with KeepandBear.com

DENVER, NORTH CAROLINA (February 21, 2019) – Officials from On Point Motorsports announced today that KeepandBear.com will serve as Primary Sponsor on the team’s No. 30 Toyota Tundra for the next two events of the 2019 NASCAR Gander Outdoors Truck Series season. Driver Brennan Poole will kick off the partnership this weekend at Atlanta Motor Speedway as he pilots the No. 30 KeepandBear.com Toyota in the running of the Ultimate Tailgating 200.

“I’m very excited to welcome a new sponsor to NASCAR and to drive the No. 30 KeepandBear.com Toyota Tundra for the next two races at both the Atlanta and Las Vegas tracks”, stated Poole. “We had a strong run going last week in Daytona but fell victim to the ‘big one’, which is the nature of super speedways. Now we head to a race track where things are a little more in your control. We are looking for a solid run in Atlanta and Las Vegas and putting on a strong showing in our No. 30 KeepandBear.com Toyota.”

Poole has two career starts at Atlanta Motor Speedway in the NASCAR XFINITY Series with both events resulting in top-15 finishes. The Woodlands, Texas native kicked off the 2019 season last week in Daytona with a strong showing piloting the No. 30 Toyota Tundra from a starting position of 26th up to 5th place before being caught up in a multi-truck wreck resulting in a 24th place finish.

“My family and I have been attending NASCAR events with great enthusiasm for many years,” said Brandon Vallorani, CEO of KeepandBear.com. “NASCAR represents everything that’s great about America: Faith, Family, Freedom, and Fast Cars! It’s a dream come true for our patriotic business, KeepAndBear.com, to sponsor the #30 Toyota Tundra and driver Brennan Poole.”

The running of the Ultimate Tailgate 200 is scheduled for Saturday February 23rd and can be seen LIVE on FoxSports1 at 4:30 pm ET.

KeepAndBear.com, a Georgia based company, was launched by Romulus Marketing LLC in the summer of 2016 to showcase the release of the groundbreaking film, Keep And Bear: America’s Most Controversial Right. This important film makes the case that gun ownership is more than a Constitutional right. The Second Amendment protects all other civil rights from the abuses of a tyrannical government. Today, KeepAndBear.com has grown to become one of the largest purveyors of conservative resources online. We feature hundreds of items including t-shirts, bumper stickers, flags, Bibles, DVDs, books, toys and patriotic novelty items, all in support and celebration of God and Country. Keep and Bear also features the hottest news and original viewpoints from conservative perspectives in our daily newsletter. Founded by Brandon Vallorani (ForbesBooks Author) and Liz Martin, Romulus Marketing also operates FlagandCross.com and manages a number of other Conservative and Christian websites and stores, contributes to a number of veteran and Conservative policy non-profit organizations, and promotes an actively Compassionate Conservative philosophy.

The post Sports Team Just Took A POWERFUL Pro-Trump Stance, & Lefties Will Be Ticked Off appeared first on Flag And Cross.