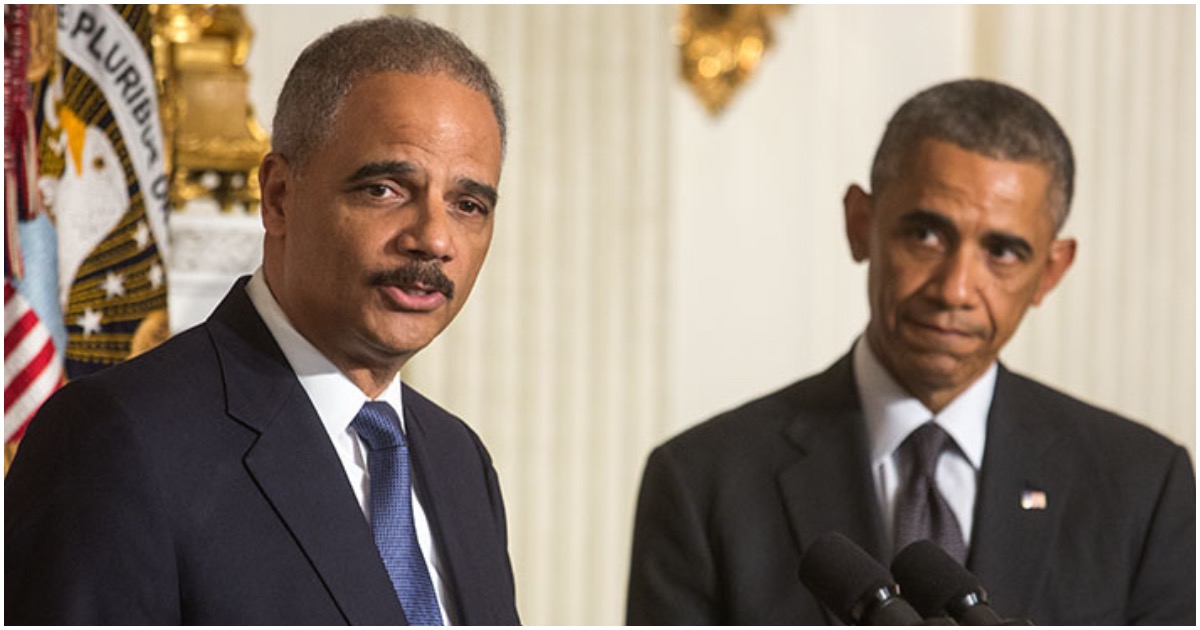 Former Attorney General Eric Holder is the only cabinet-level member in American history to be held in contempt of Congress.

He might actually run for president in 2020. More on that below.

But first, Eric wants to do away with the “undemocratic” electoral college.

A good reform measure to support. Change the Electoral College by having a state’s electoral votes go to the national popular vote winner – not the person who won the state. The candidate who gets the most votes – nationally – is elected. Real democracy.

A good reform measure to support. Change the Electoral College by having a state’s electoral votes go to the national popular vote winner – not the person who won the state. The candidate who gets the most votes – nationally – is elected. Real democracy. https://t.co/tPfNWdKQ46

The potential Democratic presidential candidate issued the tweet while linking to an article from The Washington Post that notes nearly a dozen traditionally blue states have passed legislation to circumvent the electoral college.

The push comes after President Trump won in 2016 by 77 electoral college votes, but lost the popular vote to Hillary Clinton by more than 2.8 million.

According to CNN’s April Ryan, Holder will deliver a “major speech” in Iowa in February.

Will he declare his bid for the presidency?

Breaking: @EricHolder for POTUS? Sources very close to @EricHolder affirm his decision will be announced mid to end of February on a run for president. He is said to be consulting with many people about the matter. He also delivers a major speech in Iowa in February.

It’s hard to forget about his role in Operation Fast and Furious. SMH.

As for President Trump’s chances in 2020, things are certainly looking up, as a Republican will remain governor in swing states Ohio and Florida.

Democrats are extremely scared that President Trump will be re-elected in 2020.

It is probably because the left doesn’t have a solid candidate, or at least not one strong enough to take down the MAGA agenda.

Now, in liberal New Jersey, Democrats have passed a bill to keep Trump off the 2020 ballot unless he releases his tax returns.

The New Jersey state Senate on Thursday overwhelmingly voted to pass a bill that would keep presidential candidates off the state’s 2020 ballot unless they release their tax returns.

According to the Courier Post, the Democratic-controlled state Senate passed the measure along party lines in a 23-11 vote on Thursday, sending the bill to the Assembly committee and full legislature for a vote before it heads to the desk of Gov. Phil Murphy (D) for consideration.

The controversial measure would deny candidates for president and vice president a spot on the state ballot if they do not publicly release five of their most recent tax returns at least 50 days before the general election in 2020.

all those sorry scum that have taken the oath to support the constitution and are conspiriing to subvert the constitution must be arrested and charged. SHERIFFS IT IS TIME TO HONOR YOUR OATH AND ARREST aND CHARGE THESE SCUM WHEN THEY COME INTO YOUr JURISDICTION
We are not a democracy. Our constitution is the law and is what they swore to uphold, any action against it by two or more is a conspiracy and Must be stopped.

You two need to go out back and root in the mud!

Eric Holder the AG held in contempt by Congress has nothing of value to offer in any discussion. Holder is Anti American and should be in prison as a Traitor.