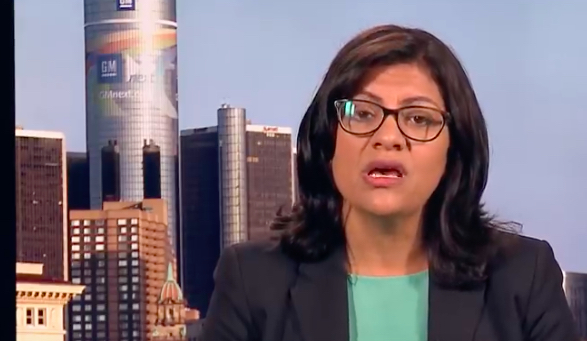 As the news keeps emerging of Jew-hating Democrats revealing the liberal party’s extremism in Congress, it has been discovered that Michigan Democrat and Muslim Rashida Tlaib once wrote an op-ed for notorious anti-Semite Louis Farrakhan in 2006.

One has to wonder just how bad the Republican campaign machine is that none of these things ever hit the airwaves until after these people were elected.

On the heels of Minnesota Rep. Ilhan Omar going full anti-Semite and deploying the “dirty Jews and their money” trope with a tweet claiming that the Joooos of AIPAC control congress, we now find Michigan Muslim Tlaib in some anti-Semitic hot water of her own.

Before we move on to Tlaib, let’s clear up what Omar did on Sunday night: The Muslim Minnesotan was discussing corruption in Congress on Twitter on Sunday night and at one point noted that “It’s all about the Benjamins baby.” Then someone asked her who she thinks is “paying” those “Benjamins” to American politicians to be pro-Israel. She answered with one word: “AIPAC!”

Of course, the reality is that AIPAC does not donate any money at all to politicians. All, Omar was doing was disgorging that hateful stereotype that Joooos spread money around to corrupt people. Adolf would be quite proud of Omar, for sure.

OK, with that cleared up… onto our next anti-Semite Democrat…

As Omar battled claims she is a Jew hater, others noticed that Michigan’s Rashida Tlaib has another anti-Semite problem of her own. An old op-ed she wrote for notorious anti-Semite and long-time racist Louis Farrakhan resurfaced.

Tlaib’s piece focused on how legal immigrants should not be deported for minor criminal offenses, according to a report from journalist Jeryl Bier. At the end of her article, the now freshman congresswoman is identified as an “advocacy coordinator of the Arab Community Center for Economic and Social Services (ACCESS) in Detroit.” Tlaib has not written in the Final Call since then.

Tlaib is an admitted and well-known supporter of the Israel Boycott, Divestment, and Sanctions movement.

She spoke in favor of BDS in January:

In further support of the BDS movement, Tlaib attempted to organize a congressional trip to the West Bank. The attempt was in opposition to an Israel trip traditionally organized for freshman members of Congress by AIPAC, a group that advocates pro-Israel policies.

“I want us to see that segregation [between Israelis and Palestinians] and how that has really harmed us being able to achieve real peace in that region,” Tlaib told the Intercept before she took office. “I don’t think AIPAC provides a real, fair lens into this issue.”

Along with Alexandria Ocaio-Cortez, Tlaib and Omar form the growing Hamas Caucus of the Democrat-controlled Congress. And expect this all to get worse as the Democrat Party gets more extreme every day.

We need to remove these radical islamist politicians from our governemt positions. These are radicals posing as “moderates”. They need to be prosecuted to the fullest extent of the law, for failingto uphold their sworn oath to uphold the US Constitution and Bill of Rights.