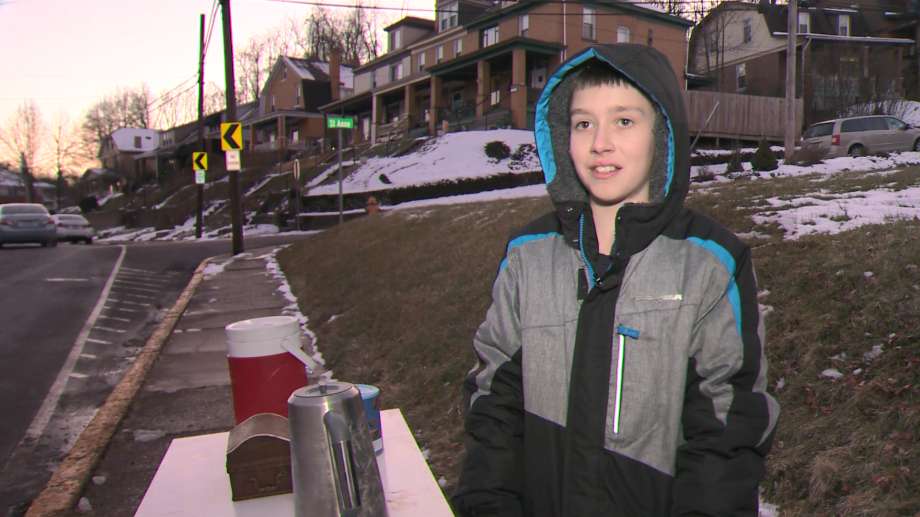 Ah, the lemonade stand. A time-honored tradition among parents and their kids who want to earn a little cash, serve a much-appreciated product to their community, and maybe brush up on math skills.

In the winter, however, and especially in the frigid North, what’s a budding entrepreneur to do?

Typically, 11-year-old Andrew Andrew admits, he prefers to sell cold drinks at his pop-up stand when it’s quite a bit warmer outside, and he does quite well at it. “A lot of times, I make over $50, and I do pretty good,” he said in an interview with WTAE.

However, if there’s one thing any local business owner must learn, it’s to adapt your approach, or even your product, to meet market demands. When faced with this challenge, the bright young man came up with the perfect alternative.

“I was kind of bored,” Andrew said of being shut in for such a long Pennsylvania winter, “so I was like, I can just come out and do something, so I came out and sold hot cocoa.”

Armed with an electric water boiler and a can of Swiss Miss, Andrew set up shop on the sidewalk in front of his home in Castle Shannon and began selling cups of hot cocoa to passersby.

Andrew says he was actually doing pretty well until, much to his surprise, he was approached by a pair of police officers who had been called to the scene.

“They asked if I was by myself, and I said, ‘No, the babysitter is in the house,'” Andrew shared with WTAE.

Andrew’s parents were notified that they’d been alerted to the situation because a concerned neighbor was alarmed at the sight of the young boy outside in the cold.

After assessing the situation and seeing that Andrew was safe, the boy offered them a free cup of cocoa, something he says he does for every first responder who visits his stand.

“[The officers] paid even though he insisted it was free, so I thought that was really nice of them,” said Rebecca Lukens, Andrew’s mom, who is surely very proud of him.

While it’s certainly commendable that Andrew was outside participating in an activity that is sure to teach him many valuable lessons rather than wasting a winter day inside playing video games, Lukens says she and her son aren’t bitter that the police were called.

If Andrew and his family learned one thing from this experience, it’s that their local law enforcement has their back. “Whoever called the cops on him are the real MVPs,” Lukens said, “because we learned that the local police were really friendly.”

As for Andrew, whose parents’ imparted a philosophy of “spending a little, saving a little, and sharing a little” when it comes to money, he plans to donate some of his hard-earned cash to local animal shelters.

It’s so easy to become disillusioned with our society and the eroded relationship of neighbors to neighbors, but stories like Andrew’s teach many valuable lessons: work hard, be kind, and don’t let people get you down.

The post This Boy Had The Cops Called On Him For Selling Hot Cocoa—Why His Mother Was Grateful appeared first on Flag And Cross.