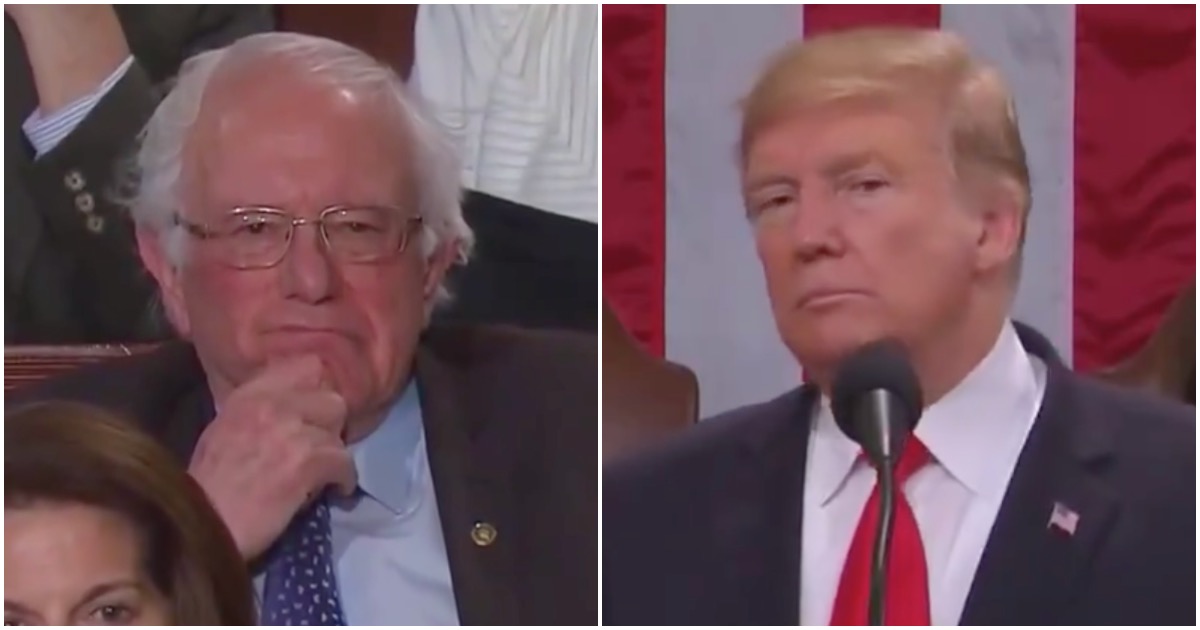 President Trump wasn’t playing around at Tuesday night’s State of the Union address.

He made it clear to every Democrat with one perfect sentence.

“America will never be a socialist country.”

You just know 45 was thinking of Bernie and Ocasio-Cortez when he said this.

President Donald Trump slammed socialism during his State of the Union address on Tuesday night, which led to a massive frown from socialist Sen. Bernie Sanders (I-VT).

Trump: “We stand with the Venezuelan people and their noble quest for freedom and we condemn their brutality of the Maduro​regime, whose socialist policies have turned that nation from being the wealthiest in South America into a state of abject poverty and despair.”

“Here in the United States, we are alarmed by the new calls to adopt socialism in our country. America was founded on liberty and independence and not government coercion, domination, and control. We are born free and we will stay free.”

“Tonight, we renew our resolve that America will never be a socialist country.”

President Donald Trump slams socialism: "America was founded on liberty and Independence and not government coercion, domination, and control. We are born free and we will stay free."

"America will never be a socialist country."

Bernie Sanders has a massive frown on his face pic.twitter.com/dY0D2J2CKJ 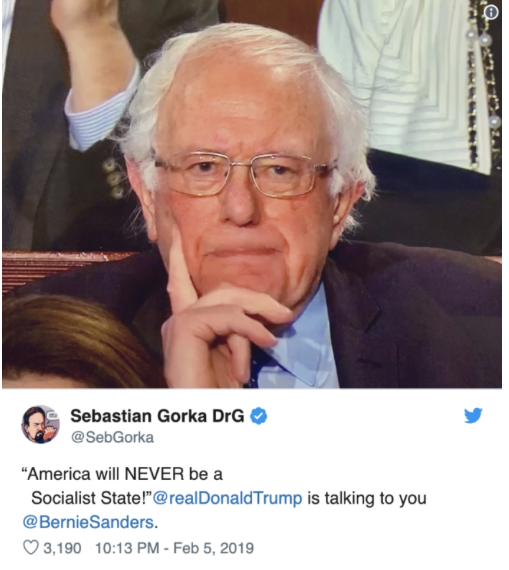 Sanders (I-VT) is being sued “over claims that he used his own political clout to punish a local businessman who ran an attack ad against Sanders.”

His wife ran a small college into the ground, by the way.

Rodolphe “Skip” Vallee, the CEO of St. Albans-based gasoline distributor and retailer R.L. Vallee, is alleging that Sanders and his senior press adviser, Daniel McLean, conspired against the business owner by drumming up a class-action lawsuit, according to federal court documents.

Vallee, who owns more than 45 gas stations in and around Vermont, produced an anti-Sanders television advertisement that aired locally in September 2014. The advertisement criticized Sanders for lambasting “the rich” over receiving tax breaks and golden parachutes, while his wife Jane Sanders received a $200,000 golden parachute after her involvement in a land deal helped to bankrupt Burlington College while she was president.

According to Yahoo News, Sanders is going to run for president in 2020.

The post WATCH: Forceful Trump Makes It Clear — America Will NEVER Be A Socialist Country appeared first on Flag And Cross.

Watching the dems when the President made that comment and seen a few very sour faces. Fun to watch the dems/socialist/communist when Trump tells them that America is not wanting their idea of a country.