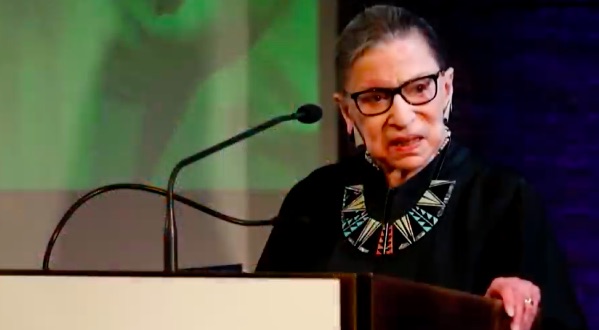 Supreme Court Justice Ruth Bader Ginsburg made her first public appearance this week after enduring a surgical procedure to remove cancer back in December…or did she?

There is some odd confusion buzzing about the media today, as RBG’s supposed involvement in an event honoring her in song provided exactly no images of the aging Judicial and pop culture icon. In fact, even more mysteriously, tweets regarding her appearance at the event have been scrubbed from Twitter as well.

Attendees at the Notorious RBG in Song described Ginsburg as “glam,” and “resplendent,” and “magnificent,” but you’ll have to take their word for it.

In an era when every person is carrying a camera and isn’t afraid to use it, there wasn’t a single snap of the 85-year-old to be found. Every media story that covered her alleged appearance used file photos.

“What a delight to see RBG tonight at ‘Notorious RBG in Song,’ written & beautifully performed by her daughter-in-law, Patrice Michaels,” Post contributor David Hagedorn posted to Twitter. “She sat in the back, a few rows behind us, looking resplendent. Being hugged & wished a happy birthday by her made a grand night spectacular.”

The reasoning for the lack of photos was reinforced later:

Ginsburg did not speak, and many in the crowd did not know she was there. She sat in the back, and most saw her only as they left the performance. Michaels did not announce her presence.

Several other reporters and legal insiders claimed to have spotted Ginsburg, who apparently looked spectacular just weeks after undergoing serious lung cancer surgery. Ginsburg underwent a pulmonary lobectomy on Dec. 21 to remove cancerous nodules in her left lung, a procedure that comes with up to eight weeks of recovery. Ginsburg missed a round of oral arguments in January, though she’s continued to vote on cases and participate in setting the docket from home, the Post reports.

Ginsburg’s procedure caused her to miss oral arguments for the first time in her long career as a Supreme Court Justice.

Believe nothing you hear and only 1/2 of what you see. Stakes or too high so no telling what lengths will be gone too