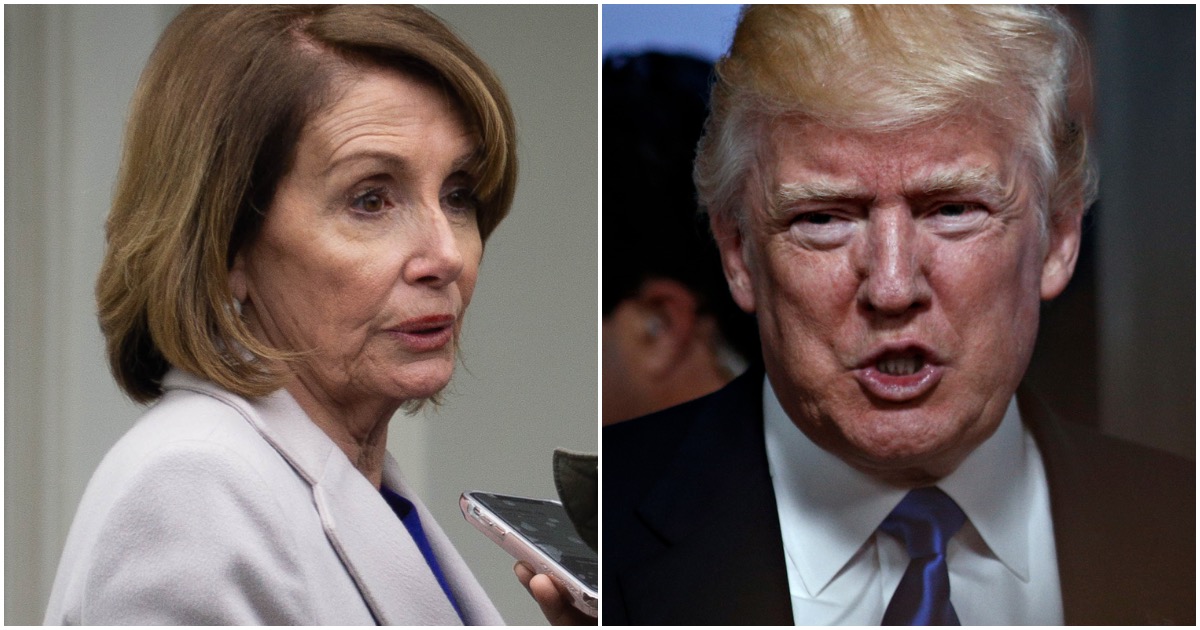 President Trump has never been one to remain silent.

If he wants to call someone out, he’ll do it.

In a new interview, 45 went after Speaker Pelosi possibly harder than ever before.

He noted, she’s “very bad for our country.”

Days before a State of the Union address in which he’s expected to stress unity, President Trump said House Speaker Nancy Pelosi is “very bad for the country,” in an exclusive interview with CBS News “Face the Nation” host Margaret Brennan.

The president also suggested Pelosi “doesn’t mind human trafficking,” or she wouldn’t oppose funding his border wall. Mr. Trump sat down for nearly an hour in the White House Blue Room Friday afternoon in a wide-ranging interview that will air on “Face the Nation” Sunday morning and prior to the Super Bowl.

Trump: “Well, I think that she was very rigid — which I would expect — but I think she’s very bad for our country. She knows that you need a barrier. She knows that we need border security. She wanted to win a political point. I happen to think it’s very bad politics because basically, she wants open borders. She doesn’t mind human trafficking or she wouldn’t do this.”

Brennan’s interview with the president comes days before his first State of the Union address in a divided government, and two weeks before government funding for several federal departments and agencies runs out on Feb. 15. The president continues to insist on billions for his border wall and has threatened to declare a national emergency at the border, which would give him the unilateral authority to use military funds to build a wall without a congressional appropriation. Pelosi postponed his State of the Union speech, which would have taken place this week, citing the government shutdown. She then re-invited the president to deliver his address Tuesday.

The border wall is a “luxury” that America “can’t afford?”

Pelosi must really hate her country to say something this asinine.

In a tense meeting with Homeland Security Secretary Kirstjen Nielsen about the U.S.-Mexico border — in which Nielsen was spieling out a slew of facts (the non-fungible kind) — Pelosi interrupted to declare: “I reject your facts.”

“The clash between the top House Democrat and a key member of President Trump’s Cabinet occurred during a Wednesday meeting in the White House amid the impasse over the government shutdown, with Trump standing firm and demanding $5 billion for the border wall,” Fox News reported.

I am disappointed that Dems did not want to hear from @DHSgov about the security & humanitarian crisis we are facing at the border. They didn’t want to hear about criminal aliens, drug smugglers, smuggled & abused children or violent caravans trying to breach the border wall.

According to Barack Obama, Nancy “will go down as one of the most effective legislative leaders that this country has ever seen.”

The post Trump SLAMS Pelosi Right Where It Hurts, Says What Nobody Else Dared To appeared first on Flag And Cross.

The bottom line is that all the democrats are bad for America. Unless of course Americans wish to do away with the Republic we grew up in and push America towards socialism and eventually communism and we could become another Venezuela or Cuba.