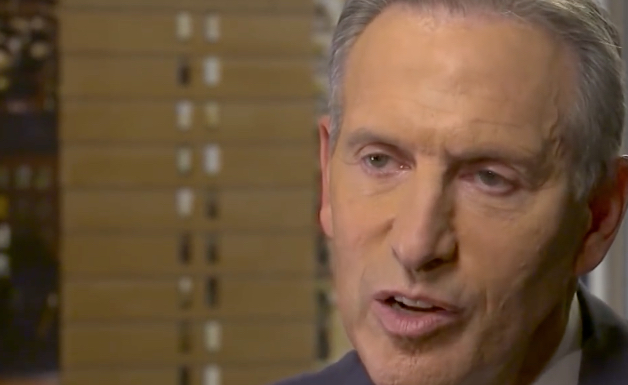 There is one heck of sticky situation currently developing on the left side of the aisle, and it’s exposing one of the most egregious realities of the democratic party.

You see, if anyone came up to you and said, “I would defend the American dream”, who are you to argue with them?  What could they possibly say that would cause you to slink away and publicly demean them later?

If your’e a democrat, however, that threshold is apparently in a strange place.

Mike Allen, the well-wired reporter for Axios, says Democrats are beyond being furious at Howard Schultz, the former CEO of Starbucks. Allen is “hearing threats of boycotts and social isolation, attacks on Starbucks, and emotional, insistent lobbying of his advisers.”

The anti-Trump talking heads and liberal consultants are terrified at the mere thought that an “independent centrist” presidential candidate like Schultz would draw some votes from a liberal Democratic nominee running against President Trump in 2020.

What has Schultz said that is so damning?

“Senator Elizabeth Warren said some pretty sharp words about me. She referred to me as a billionaire out of touch with the American people,” Schultz said in a short video. He told his rags-to-riches story succinctly and in a patriotic way.

“I grew up in Brooklyn, New York, in Canarsie, in federally subsidized housing, the projects. When I was 7 years old my father, who was a laborer, came home and had a serious accident. He was dismissed from his job, we lost our health insurance. I witnessed the fracturing of the American dream,” the former Starbucks CEO began.

Schultz witnessed failure early, but he did not let that define him.

“I started with nothing and I made it in America because of the aspiration, the magnetism, and the spirit of our country,” he declared. “I’ve always believed in the promise of the country. What is the promise of the country? What it is is regardless of your station in life, the color of your skin, your gender, your sexual orientation, whatever it might be, that everyone should have a chance in America.”

“What we need right now in America is for the country to come together, and for the Democrats and Republicans who have been unwilling to work together, to finally realize that the American people deserve much more than political slogans and tweets,” he said. “What we need is a government that can work for us, leadership that we can trust.”

“And if I run for president, what I am going to try to do is restore the faith and the promise of the country and the American dream,” Schultz declared.

Schultz’s reminder to the American people about their true power is what the democrats have surely rebuked in their attacks on Schultz.

After all, this is the party that rigged their own primary to field a flawed candidate, costing them the 2016 election.  They are liable to do just about any desperate thing to remain in power.

The post Dems Shun Schultz After He Declares Defense of “American Dream” appeared first on Flag And Cross.

If I had to choose between Schultz and the far-left dems coming out I would choose Schultz. However I will have Donald Trump to vote for in 2020 and he is proving up to be the best President for America in many years. It’s so refreshing to finally have a “politician” that actually attempts to keep his campaign promises. And that with the obstructionist dems and some rinos in the swamp. MAGA, vote out all the leftist politicians.