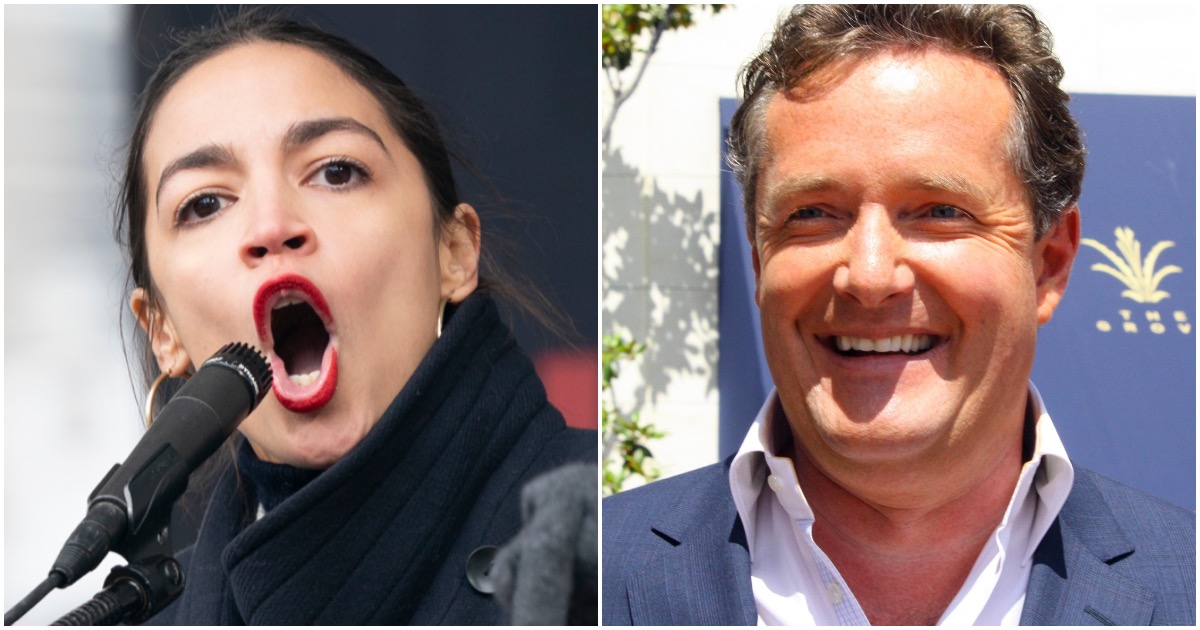 Piers Morgan is a tough egg to crack.

On certain issues, like gun control, the journalist is far-left.

On other subjects, he tends to lean right.

However, when it comes to New York Rep. Alexandria Ocasio-Cortez, Piers isn’t playing around.

Morgan lashed out at the self-described Democrat Socialist, going as far as claiming her initials, AOC, stand for “Annoying Overhyped Charlatan.”

… like most fervent PC-crazed socialists I’ve met, she is not above copious lashings of shameless hypocrisy. This is a woman who we know despises the rich and wants to take rich people’s money away to help the poor. Her flagship new headline-grabbing policy idea is to slap a 70% tax rate for the wealthiest Americans, thus punishing many of them for being successful and creating jobs. Yet our budding female Robin Hood recently wore a $1,990 Gabriela Hearst blazer, $890 matching wool pants, and $625 Manolo Blahnik pumps for an Interview magazine photo-shoot, in which, with no apparent sense of irony, she draped herself around construction workers and talked about the urgent need for more to be done to reduce financial inequality.

Morgan noted, “She inspires such demented support because she is the ultimate ‘woke’ liberal celebrity, someone whose whole life now seems devoted to virtue-signalling her way to the top. There’s no issue, from transgender rights to climate change, on which she isn’t apparently now a world authority.”

He added, “… there’s no doubt that ‘AOC’, as she likes to call herself, bows to nobody in self-adoration, even it means creating a shrine to her own magnificence on her office door. To understand the full magnitude of her ego, AOC even compared her New York election victory to America’s 1969 Moon landing and the 1964 Civil Rights Act.”

He concluded, “Piers Morgan Labels Trump will be licking his lips with unconfined joy that the Democrats’ noisiest media-dominating new star is a fork-tongued, hypocritical, cocky, extremely “woke” hard-core socialist. Frankly, he couldn’t script a better figurehead for his rivals as he battles re-election. AOC’s post-it note fans think her acronym stands for: “Amazing Outstanding Champion.” I would put it another way: “Annoying Overhyped Charlatan.”

A survey of 1,000 Likely Voters were polled over the course of two days.

They were asked who they would vote for in 2020 if President Trump faced off against Democrat Socialist Congresswoman Alexandria Ocasio-Cortez.

The result is pretty frightening.

A new Rasmussen Reports national telephone and online survey finds that, if the 2020 presidential race was between Trump and Ocasio-Cortez, 43% of Likely U.S. Voters would vote for Trump, while 40% would vote for Ocasio-Cortez. A sizable 17% are undecided.

The plus/minus on this poll is three percent.

Meaning, AOC could be tied with Trump.

You need 2,000 people to conduct an accurate poll.

Also, a person has to be 35-years-old to be president.

Joe Biden does not appear to have the support of Barack Obama when it comes to running for president.

Former President Obama’s talk about how politics need “new blood” is being seen as a blow to Joe Biden, the former vice president that Obama did not back to succeed him in 2016.

Sources close to both men describe Obama and Biden as friends who share an admiration and respect for one another.

But they also acknowledge recent remarks like the one Obama made this week in Hawaii represent a sort of threat to Biden, who has told allies in recent days that he’s likely to enter the 2020 presidential race.

According to Biden, he’s the “most qualified person in the country to be president.”

The post Piers Morgan Rips ‘Annoying Overhyped Charlatan’ Ocasio-Cortez Like Nobody Ever Has appeared first on Flag And Cross.