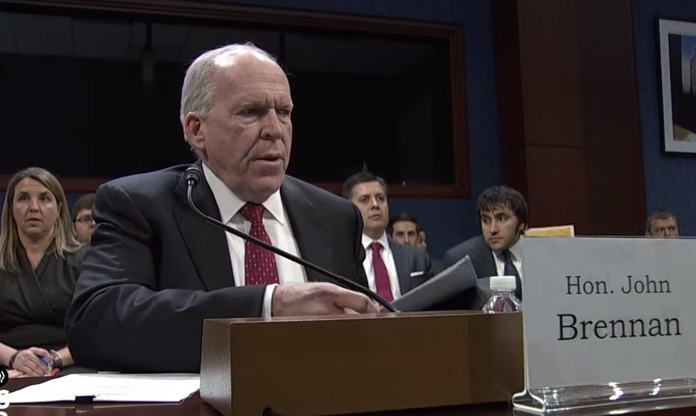 Robert Mueller, like any good government spook, much prefers working in the shadows to lending his visage to the light.

Privately, Mueller seems to have his nose to the grindstone.  Publicly, the man is a ghost.  Only the same few stock photos continue to circulate, with the Special Counsel allowing the results of his efforts do the talking.

Just this morning, Trump confidante Roger Stone was arrested in Florida.  The dramatic, pre-dawn raid was reminiscent of something from a Hollywood blockbuster – almost certainly a purposeful piece of optics by Robert Mueller for the purpose of startling our TV-affluent President.

Now, a former CIA director is warning that Mueller’s reign of terror has only yet begun, and that the next two months will be Hell for Camp Trump.

Former CIA Director John Brennan believes the indictments of many individuals “familiar to the average American” are just around the corner, following the Friday arrest of Roger Stone, a former adviser to President Donald Trump.

The FBI arrested Stone on charges including obstruction of justice and witness tampering, in connection to special counsel Robert Mueller’s probe into alleged Russian interference in the 2016 election.

Calling the Trump ally’s arrest “unsurprising,” Brennan said more indictments were likely to follow. “I expect in the next 60 days you’re going to have a fair number,” Brennan told MSNBC’s Morning Joe on Friday.

“I think people are waiting for the report that is coming out from Robert Mueller. What I look for most are the indictments. It’s so rich in detail. To me all of these indictments will be basically the compendium of Robert Mueller’s, the special counsel’s investigation. I expect there to be a significant number, and a significant number of names that will be quite familiar to the average American.”

Stone was one of the few Mueller targets who publicly spoke out against the Special Counsel, even going on television as recently as the night before his arrest to proclaim that Mueller was trying to “ruin” his life.

THE CRIMINAL AND TRAITOR MUELLER AND HIS GANG OF THUGS are going to keep pushing all this COMMUNIST CORRUPTION until the President pushes BACK, AND WHEN HE DOES WE THE PEOPLE NEED TO HELP HIM.

And any & all of those being prosecuted are from the conservative side, while all of those criminals from the obama and clinton crime family have been given a pass. Meanwhile the brennan muslim/communist never should have been in our government and certainly should be doing his speaking from a prison cell.