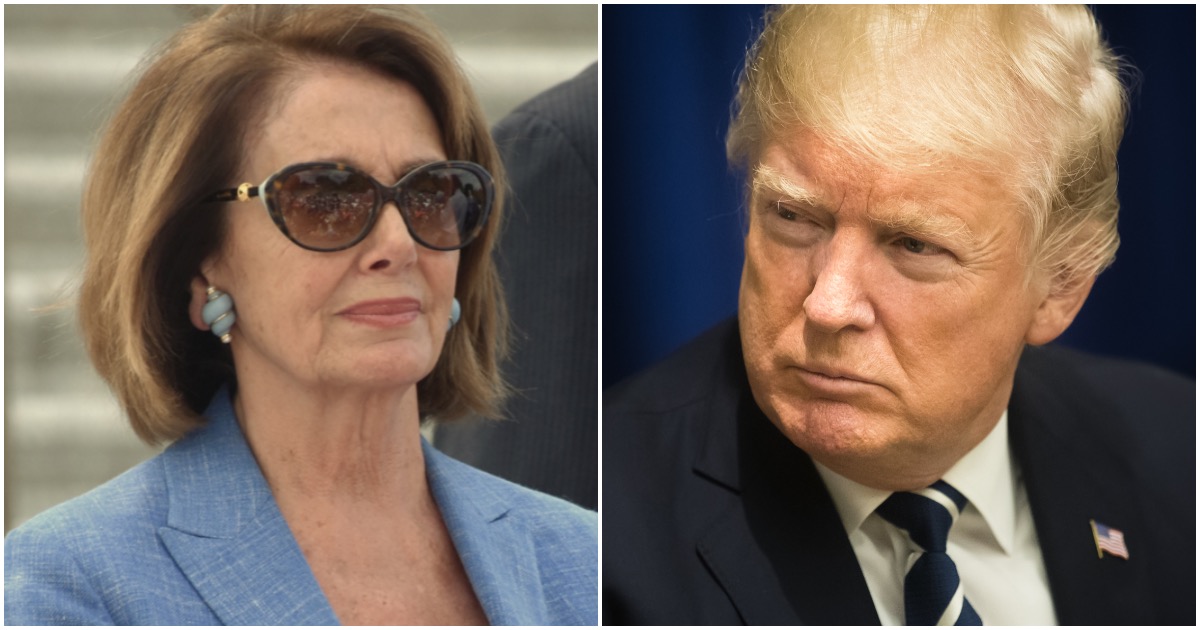 Speaker Nancy Pelosi (D-CA) told President Trump he had to delay his State of the Union address during the partial government shutdown.

That didn’t sit well with POTUS, as one might imagine.

However, the Donald wasn’t fazed.

Trump plans to “forge ahead” with a SOTU on January 29.

Nancy has to feel pretty silly!

Colleague John Roberts rpts Trump intends to forge ahead with State of the Union next week. WH wants to schedule walkthrough, which was canceled last week

Pelosi suggested Trump postpone his SOTU address or deliver it in writing until the shutdown ends, but the president is planning to be on Capitol Hill on Jan. 29, Fox reports pic.twitter.com/GtczWbcgge

The move is the latest in a game of political brinksmanship between Trump and the House Speaker as they remain locked in an increasingly personal standoff over Trump’s demand for border wall funding that has forced a partial government shutdown that is now in its second month.

The gamesmanship began last week when Pelosi sent a letter to Trump suggesting that he either deliver the speech in writing or postpone it until after the partial government shutdown is resolved, citing security concerns. But the White House maintains Pelosi never formally rescinded her invitation, and is, in essence, calling her bluff.

President Trump has covered all his bases with four tweets the speaker may want to read:

Nancy Pelosi and some of the Democrats turned down my offer yesterday before I even got up to speak. They don’t see crime & drugs, they only see 2020 – which they are not going to win. Best economy! They should do the right thing for the Country & allow people to go back to work.

No, Amnesty is not a part of my offer. It is a 3 year extension of DACA. Amnesty will be used only on a much bigger deal, whether on immigration or something else. Likewise there will be no big push to remove the 11,000,000 plus people who are here illegally-but be careful Nancy!

Nancy Pelosi has behaved so irrationally & has gone so far to the left that she has now officially become a Radical Democrat. She is so petrified of the “lefties” in her party that she has lost control…And by the way, clean up the streets in San Francisco, they are disgusting!

Nancy, I am still thinking about the State of the Union speech, there are so many options – including doing it as per your written offer (made during the Shutdown, security is no problem), and my written acceptance. While a contract is a contract, I’ll get back to you soon!

Always heard that as President, “it’s all about the economy!” Well, we have one of the best economies in the history of our Country. Big GDP, lowest unemployment, companies coming back to the U.S. in BIG numbers, great new trade deals happening, & more. But LITTLE media mention!

Be careful and try staying in your house. Large parts of the Country are suffering from tremendous amounts of snow and near record setting cold. Amazing how big this system is. Wouldn’t be bad to have a little of that good old fashioned Global Warming right now!

Wow, just heard that my poll numbers with Hispanics has gone up 19%, to 50%. That is because they know the Border issue better than anyone, and they want Security, which can only be gotten with a Wall.

Don’t forget, we are building and renovating big sections of Wall right now. Moving quickly, and will cost far less than previous politicians thought possible. Building, after all, is what I do best, even when money is not readily available!

Hillary Clinton is doing whatever she can to remain relevant.

Why? She’s most likely not running for president in 2020.

Why not just retire already?

Anti-Trump dossier author Christopher Steele has some news an honest media would love to report.

As we’ve all witnessed for a while now, the MSM isn’t on the level anymore.

Steele has now revealed that twice-failed presidential candidate Hillary Clinton, along with the Democrat National Committee, paid him to help challenge the validity of the 2016 election if she lost.

Hillary and the DNC presumed Russia would’ve helped Trump, which is what they would have challenged.

Wasn’t Hillary the one who slammed Trump for saying he might contest the result of the race?

British ex-spy Christopher Steele, who wrote the Democrat-financed anti-Trump dossier, said in a court case that he was hired by a Democratic law firm in preparation for Hillary Clinton challenging the results of the 2016 presidential election.

He said the law firm Perkins Coie wanted to be in a position to contest the results based on evidence he unearthed on the Trump campaign conspiring with Moscow on election interference.

Steele wrote: “Fusion’s immediate client was law firm Perkins Coie. It engaged Fusion to obtain information necessary for Perkins Coie LLP to provide legal advice on the potential impact of Russian involvement on the legal validity of the outcome of the 2016 US Presidential election.”

“Based on that advice, parties such as the Democratic National Committee and HFACC Inc. (also known as ‘Hillary for America’) could consider steps they would be legally entitled to take to challenge the validity of the outcome of that election.”

President Trump is elated now that Jeff Sessions is no longer attorney general.

The relationship between the two soured when the former AG recused himself from the Mueller/Russia probe.

Now, Trump has some words for Sessions he won’t forget anytime soon.

SPOILER ALERT: “Jeff Sessions should be ashamed of himself!”

“It looks here as though General Flynn’s defenses are incidental to something larger which is for the prosecution to figure out if it can find a path to Donald Trump without quite knowing what that crime might be. It stops looking like prosecution and more looking like……

….a persecution of the President.” Daniel Henninger, The Wall Street Journal. Thank you, people are starting to see and understand what this Witch Hunt is all about. Jeff Sessions should be ashamed of himself for allowing this total HOAX to get started in the first place!

….The Russian Witch Hunt Hoax, started as the “insurance policy” long before I even got elected, is very bad for our Country. They are Entrapping people for misstatements, lies or unrelated things that took place many years ago. Nothing to do with Collusion. A Democrat Scam!

The post Trump Embarrasses Pelosi In Front of Entire Nation After She Denies State of the Union appeared first on Flag And Cross.

Pelosi is showing her fear of the truth hence she is trying to stop The St. of The Union Address.