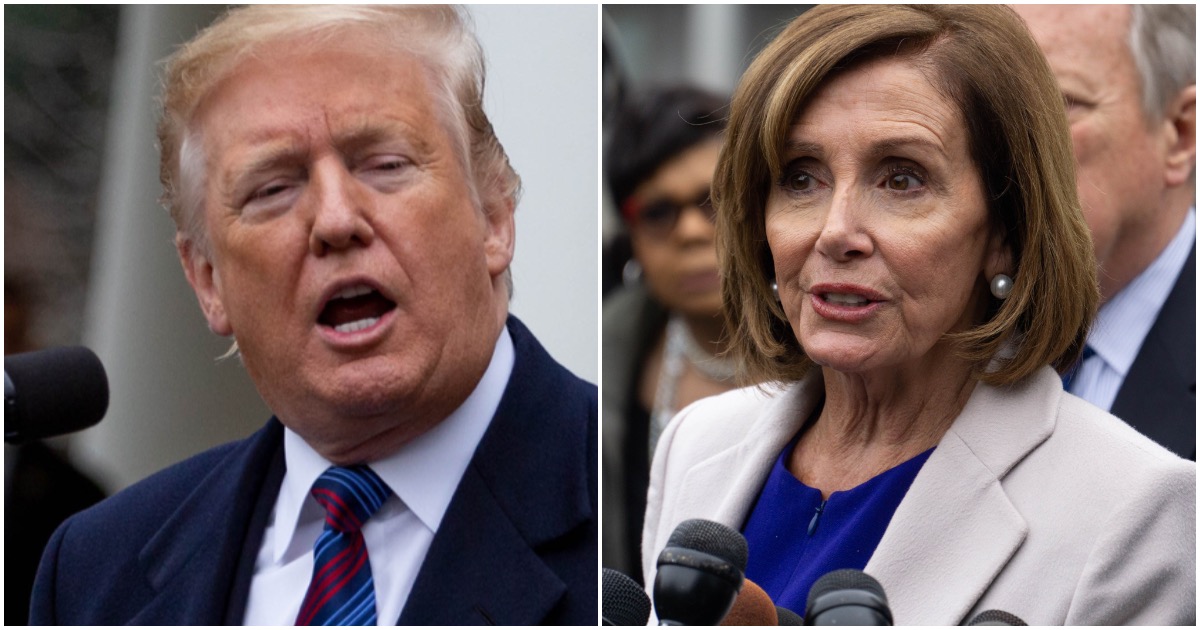 President Trump has covered all his bases with four tweets the speaker may want to read:

Nancy Pelosi and some of the Democrats turned down my offer yesterday before I even got up to speak. They don’t see crime & drugs, they only see 2020 – which they are not going to win. Best economy! They should do the right thing for the Country & allow people to go back to work.

No, Amnesty is not a part of my offer. It is a 3 year extension of DACA. Amnesty will be used only on a much bigger deal, whether on immigration or something else. Likewise there will be no big push to remove the 11,000,000 plus people who are here illegally-but be careful Nancy!

Nancy Pelosi has behaved so irrationally & has gone so far to the left that she has now officially become a Radical Democrat. She is so petrified of the “lefties” in her party that she has lost control…And by the way, clean up the streets in San Francisco, they are disgusting!

Nancy, I am still thinking about the State of the Union speech, there are so many options – including doing it as per your written offer (made during the Shutdown, security is no problem), and my written acceptance. While a contract is a contract, I’ll get back to you soon!

Always heard that as President, “it’s all about the economy!” Well, we have one of the best economies in the history of our Country. Big GDP, lowest unemployment, companies coming back to the U.S. in BIG numbers, great new trade deals happening, & more. But LITTLE media mention!

Be careful and try staying in your house. Large parts of the Country are suffering from tremendous amounts of snow and near record setting cold. Amazing how big this system is. Wouldn’t be bad to have a little of that good old fashioned Global Warming right now!

Wow, just heard that my poll numbers with Hispanics has gone up 19%, to 50%. That is because they know the Border issue better than anyone, and they want Security, which can only be gotten with a Wall.

Don’t forget, we are building and renovating big sections of Wall right now. Moving quickly, and will cost far less than previous politicians thought possible. Building, after all, is what I do best, even when money is not readily available!

Speaker Nancy Pelosi (D-CA) is not comfortable in the public eye, as funny as that may sound.

She constantly stutters and jumbles her words.

DCCC fundraising email on Kavanaugh is wildly misleading. It says McConnell is resuming Kavanaugh hearings without hearing the allegations And that Kavanaugh could be confirmed in “a matter of hours”
Not true. pic.twitter.com/LSEnDSSUyD

Pelosi on Kavanaugh: “I think he disqualified himself with those statements and the manner in which he went after the Clintons and the Democrats … There was a way for him to go forward with dignity and without jeopardizing his own objectivity in the public mind.” pic.twitter.com/IZNu8NnR0O

Remember, January 3 was only day one of what promises to be a wild two years.

Democrats are now in charge of the House of Representatives, and Pelosi has once again been voted Speaker.

Does Pelosi care what Americans want?

House Minority Leader Nancy Pelosi (D-CA) promised over the weekend to pass the Dream Act in the new Congress, which would provide amnesty to millions of illegal immigrants.

Pelosi: “America draws strength from our long, proud heritage as a nation of immigrants. In the Majority, Democrats will work to reverse the Republicans’ destructive anti-immigrant agenda. Our House Democratic Majority will once again pass the Dream Act to end the uncertainty and fear inflicted on patriotic young men and women across the country.”

He says “no sane country” would give birthright citizenship to illegal immigrants.

Reid declared on the Senate floor: “If making it easy to be an illegal alien isn’t enough, how about offering a reward for being an illegal immigrant? No sane country would do that, right? Guess again.”

“If you break our laws by entering this country without permission and give birth to a child, we reward that child with U.S. citizenship and guarantee a full access to all public and social services that this society provides, and that’s a lot of services.”

In 2015, Hillary Clinton boasted about voting to build “barriers” on the southern border to keep out illegal aliens while she was a senator.

However, President Donald Trump chose to tweet out a 2005 clip of former President Barack Obama basically saying illegals were not welcome in America, noting that illegals “disrespect the rule of law.”

Obama: “Those who come here illegally and those who employ them disrespect the rule of law and they are showing disregard for following the law. We simply cannot allow people to pour into the United States undetected, undocumented, unchecked, circumventing the line of people who are waiting patiently, diligently and lawfully to become immigrants in this country.”

I agree with President Obama 100%! pic.twitter.com/PI3aW1Zh5Q

On Hillary’s stance from 2015, per Weekly Standard:

“Well look,” Clinton said, “I voted numerous times when I was a senator to spend money to build a barrier to try to prevent illegal immigrants from coming in. And I do think you have to control your borders.”