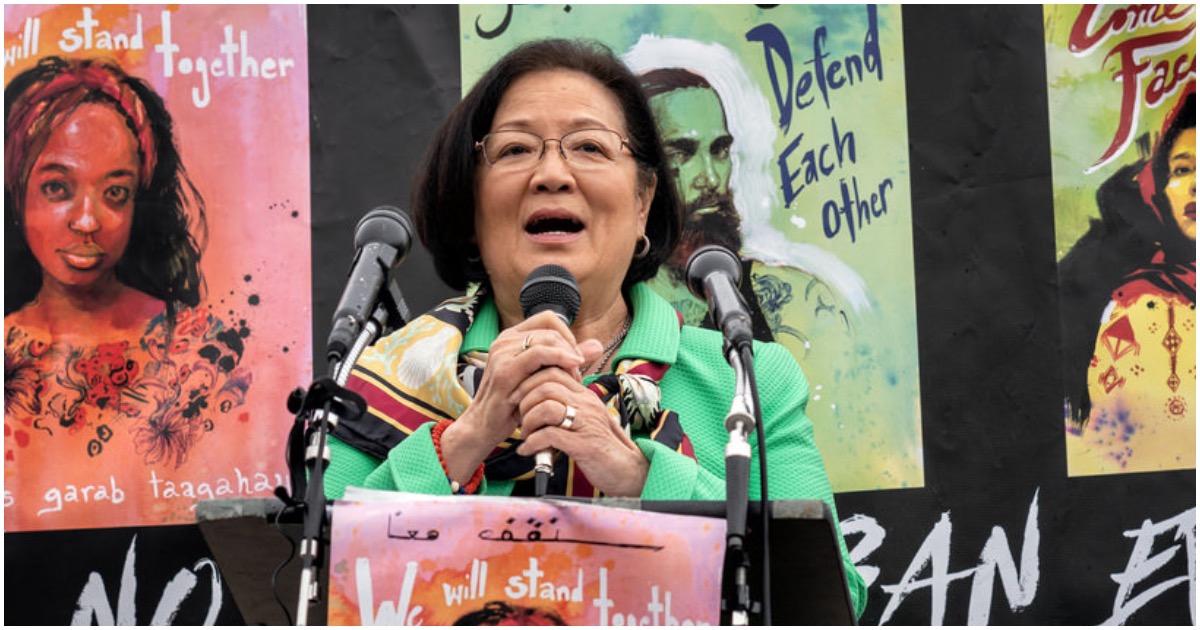 It’s not okay to be Christian in Donald Trump’s America.

Two Democrats on the Senate Judiciary Committee are pressing a nominee for the Nebraska federal trial court about his membership in the Knights of Columbus, a fraternal service organization of the Catholic Church.

“The Knights of Columbus is a Roman Catholic service organization with approximately two million members worldwide,” Buescher wrote in response to Hirono and Harris’ questions. “The organization has a religious and charitable purpose. I joined the Knights of Columbus when I was 18 years old and have been a member ever since. My membership has involved participation in charitable and community events in local Catholic parishes.”

Now, Hirono is doubling down…

Hawaii Democratic Sen. Mazie Hirono on Friday doubled down on her criticisms of the Knights of Columbus, a Catholic organization and one of the world’s most charitable entities.

After Nebraska Republican Sen. Ben Sasse introduced a resolution reaffirming the unconstitutionality of religious tests for public office, Hirono once again went on the attack accusing the mild-mannered Nebraskan of taking an “alt-right” position.

Hirono: “If my colleague, the junior Senator from Nebraska, wants to embrace the alt-right’s position by offering this resolution, that is his business. Rather than passing a resolution to address a problem that doesn’t exist, we should focus on something real, like ending this totally unnecessary, unjustified shutdown.”

Kamala is one of the top ethics violators of 2018.

According to a nonpartisan watchdog group, two Democratic senators were the “top ethics violators of 2018” because they solicited donations by trumpeting their antagonism to Judge Brett Kavanaugh’s confirmation during the hearings to confirm him. Those two senators were — drum roll — Sen. Elizabeth Warren (D-MA) and Sen. Kamala Harris (D-CA).

According to the Foundation for Accountability and Civic Trust (FACT), the “winners” are Harris and Warren.

Harris thinks members of Immigrations and Customs Enforcement are comparable to men of the Ku Klux Klan.

They are one and the same.

This is who Democrats might want to run for president in 2020?

I guess that makes sense.

Watch below as Harris gets destroyed by the acting director of ICE.

Harris made the comparison during a Senate Homeland Security and Governmental Affairs Committee hearing to consider the nomination of Ronald Vitello to be the new director of ICE.

Harris asked Vitiello about comments he previously made in which he referred to the Democratic Party as “liberalcratic” or “NeoKlanist,” in an attempt to publicly shame him. Harris repeatedly pressed him to explain why he made the remark and why the remark was wrong for him to make.

Vitiello: “The Klan was what we could call today a domestic terrorist group.”

Harris: “Why? Why would we call them a domestic terrorist group?”

Vitiello: “Because they tried to use fear and force to change the political environment.”

Harris: “And what was the motivation for the use of fear and force?”

Vitiello: “It was based on race and ethnicity.”

Harris: “Right. And are you aware of the perception of many about how the power and discretion at ICE is being used to enforce the law and do you see any parallels?”

Vitiello: “I do not see any parallels between sworn officers and agents–”

Vitiello: “I do not see a parallel between what is constitutionally mandated as it related to enforcing the law. I see no perception that puts ICE in the same category as the KKK.”

Not Joe Biden. Not Eric Holder.

Not Hillary Clinton or Michael Avenatti.

The top choice for Democrat presidential nominee in 2020 is…

“None of the above.”

The post Dem Senator Who Told Catholic Judge to Rescind Religious Membership Doubles Down appeared first on Flag And Cross.