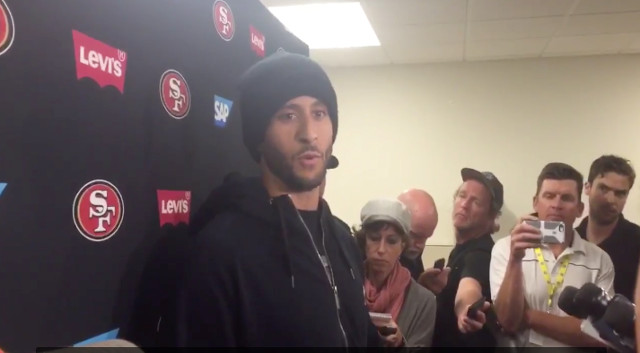 Rapper Travis Scott defied a boycott of the Super Bowl set up by a list of black performers and now reports say that the beneficiary of the boycott, former NFL player Colin Kaepernick, is not at all happy with the rapper’s decision to work with the NFL.

According to a number of reports, former San Francisco 49ers quarterback Colin Kaepernick is upset that rapper Travis Scott decided to to perform at the upcoming Super Bowl.

Despite the reports, Scott claims that Kaepernick “respected” his decision to play this year’s halftime show.

A long list of black performers, including Cardi B, Rihanna, Jay-Z, Meek Mills, and many others, announced a boycott of the Super Bowl to show support for Colin Kaepernick, who was benched by the league after the 2016 season during which he invented the anti-American protest as the national anthem played. Kaepernick in now suing the league claiming the league and its owners “colluded” to keep him from continuing his pro football career.

Boycott or no, Scott bucked the group of black entertainers and signed up to perform alongside rock band Maroon 5.

Scott claimed that he required the NFL to make a large donation to a social justice cause as a prerequisite for his performance. However, Scott has not reported the amount of the donation nor to what social justice group that donation was to be given.

Scott also took the step of having a conversation with Kaepernick to explain why he was taking the Super Bowl gig.

Scott and Kaepernick had at least one phone conversation before the rapper confirmed his Super Bowl appearance, sources tell Variety. A source close to Scott said that while the two did not necessarily agree, they emerged from the conversation with mutual respect and understanding, with the rapper taking the stance that everyone makes a statement in their own way and he felt that the money going toward Dream Corps, combined with the platform provided by the Super Bowl, will do some good. The source also said that Scott would not confirm his performance until the donation was locked in.

This is not the same story people close to Kaepernick are telling.

According to Kaepernick’s activist girlfriend, Nessa Diab, Scott is full of it.

Diab, a California radio personality and loud social justice advocate, jumped to her Twitter account to refute the claims that there was mutual respect between Kaepernick and Scott.

There is NO mutual respect and there is NO understanding for anyone working against @Kaepernick7 PERIOD. #stoplying https://t.co/0HB6kcWJRG

Diab also posted a message to Instagram divulging more of her thoughts on Scott’s actions:

1. Artists don’t get paid to perform at “the big game.” These performers are CHOOSING to do this for a ‘look.’

2. The fact that many people have told him don’t support the organization that has blackballed [Kaepernick] for standing up for people, and he still does it anyways, shows more about him than anything else.

AND! If someone wants to work with the opposition, then that’s on them, BUT DO NOT have your team lie to reporters to insinuate Colin was okay with anyone working against him. PERIOD!

The former San Francisco 49er quarterback himself has not spoken publicly about the discussion with the rapper, but his girlfriend’s messages are telling, nonetheless.

For his part, Scott added a statement about the issue: “I back anyone who takes a stand for what they believe in. I know being an artist that it’s in my power to inspire. So before confirming the Super Bowl Halftime performance, I made sure to partner with the NFL on this important donation. I am proud to support Dream Corps and the work they do that will hopefully inspire and promote change.”

The 2019 Super Bowl will be played on February 3 after the last two wild card games are played this coming weekend to determine which two teams will meet for the championship.